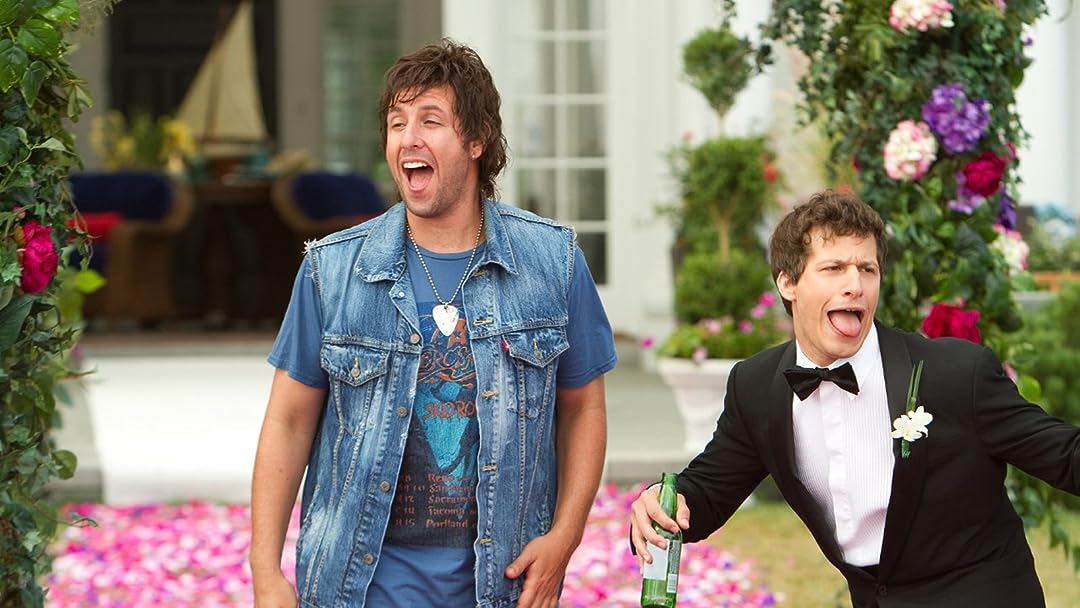 (9,931)
5.51 h 56 min2012X-RayR
While still in his teens, Donny (Adam Sandler) fathered a son, Todd (Andy Samberg), and raised him as a single parent until Todd's 18th birthday. Now, after not seeing each other for years, Todd's world comes crashing down on the eve of his wedding when an uninvited Donny suddenly shows up. Trying desperately to reconnect with his son, Donny is now forced to deal with the repercussions of his b..

JayaReviewed in the United States on July 13, 2021
1.0 out of 5 stars
Disgusting with truly horrible messages & not funny
Verified purchase
I watched this whole thing but in parts because I couldn't manage it all at one time. Making a comedy about child abuse and incest.... seriously?? Incest is shown as gross but only to show that child abuse and screwing friends' mothers and grandmothers really is fine. In fact, good-hearted people can do that. And a 13 year old kid and his teacher having sex as she drags him into her office is also a very good thing. It's a "special connection", it's "real love". As adults, they play out their "dirty" games in front of their son with her behind the glass in prison. He gave his son diabetes. Yet, the whole thing ends with the father saving the day and the son realizing what a good dad he actually is/was. As someone who experiencing real child abuse like this and knows many other children do, how could this ever be funny? Always getting the message from society that forgiveness is key and parents did their best. I know this is why they showed incest as the thing that the bad person was doing. It's the only thing left that could be more gross and horrible than what the good people were doing. But, hey, after seeing the movie up to that point, I was just numb and didn't see any problem with anything. Donny throws up after seeing a brother & sister have sex???? After he jacked off to a pic of her elderly grandmother then had sex with her?? Honestly, I thought Donny had no barriers at all when it came to sex, certainly nothing could make him puke! It's a "special connection" they had!
2 people found this helpful

DLReviewed in the United States on February 28, 2018
5.0 out of 5 stars
Funniest and most underrated movie of our times!
Verified purchase
I'm going to make a controversial statement here: this is the funniest movie of the past decade! This is not your typical Sandler film, it has more of a Farrelly brothers feel to it. It is raunchy, it is politically incorrect, it touches on a lot of taboos, and boy is it fun if you allow yourself to just flow with it. There are so many small nuances (likes peoples' reactions to these bizarre situations), quirky one-liners, and just a general outright ridiculousness of this film that is so...refreshing and liberating. Plus, the father-son dynamic with Sandler and Andy Samberg is oddly heart-warming. This film is so grossly underrated, I wish more folks would give it a shot.
20 people found this helpful

WindyBradleyReviewed in the United States on July 2, 2021
5.0 out of 5 stars
Completely UNDERRATED. GIVE IT A CHANCE!
Verified purchase
I recently had a very hard month. I decided to watch all of Adam Sandler's movies in a effort to cheer up. I was hesitant to watch this one because I remember the trailers thinking, "pass." But I was WRONG! This is now one of my FAVORITE Sandler movies. It is so funny!!! Just let the absurdity wash over you. Watch it with a friend. Just get another burrito, TODD. Thank you, Sandman! Your work got me through this time and I will attest to the comedy of this movie as a major factor in my recovery. I think I'll watch it again right.... now!
2 people found this helpful

IzzyReviewed in the United States on June 11, 2021
1.0 out of 5 stars
Gross
Verified purchase
In the first 20 minutes, a little boy is seduced by his teacher and assaulted. Everyone is thrilled. Why? Because it is funny when people do things that "would never happen in real life". Stuff like this happens all the time. Assaulting someone let alone a child isn't funny, even if you make it a woman. Why sexualize a teacher too? God can't I watch one movie nowadays without feeling depressed after. Gross this has such a high rating. Please, men or whoever makes screwed-up films like this, please make something funny.
2 people found this helpful

NicCole WeinbergReviewed in the United States on March 3, 2020
1.0 out of 5 stars
Not for Samburg Fans
Verified purchase
If you came for Andy, leave. Right now. Walk away without seeing this atrocity. It was the most painful movie I've sat through in a Long time, and I like Sandler's early stuff. This is not Samburg's humor, it's way too offensive to not stupid people. Skip it, go watch Popstar; it's better, barely, but it's at least his humor.
5 people found this helpful

joel wingReviewed in the United States on December 18, 2021
3.0 out of 5 stars
Adam Sandler's most over the top and ridiculous movie and that's saying a lot
Verified purchase
That’s My Boy might be Adam Sandler’s most ridiculous movie and that’s saying a lot. He plays a man who impregnated his teacher in high school and became famous for it. Now he’s trying to bond with his estranged son Andy Samberg. Sandler for his part gets to be the over the top jokester. I mean he goes way over the top, more than any of his previous releases. Samberg on the other hand is the straight guy. I’m not even going to try to explain some of the things they get into in this film but just the premise alone should be a hint. I laughed out loud and enjoyed all the raunchy low brow humor which is all over this film.

Jan PReviewed in the United States on December 25, 2020
1.0 out of 5 stars
Terrible writing. Awful characters. Misleading rating.
Verified purchase
This is the worst movie I have seen in years. The rating here on said it was 4.5/5 (WHAT?) so we decided to give it a go. Within 20 minutes I really regretted renting it. I looked online and it was actually 20% on Rotten & 1 out of 5 basically everywhere else. It’s soo poorly written & you actually hate Adam Sandler’s character.

Lame! Horrible movie. Adam Sandler has made a turn for the worst in his acting. He’s trash now. Terrible script. I wish I could get a refund.

edward collinsReviewed in the United States on February 20, 2021
1.0 out of 5 stars
horrible not funny beyond offensive
Verified purchase
most offensive and perverted unacceptable piece of garbage movie how the heck is this even possible

it started out with some adolescent screwing his teacher - and the entire school, including grownups, applauding

beyond inappropriate humor and comments

it should be rated c for criminal

2 people found this helpful
See all reviews
Back to top
Get to Know Us
Make Money with Us
Amazon Payment Products
Let Us Help You
EnglishChoose a language for shopping. United StatesChoose a country/region for shopping.
© 1996-2022, Amazon.com, Inc. or its affiliates