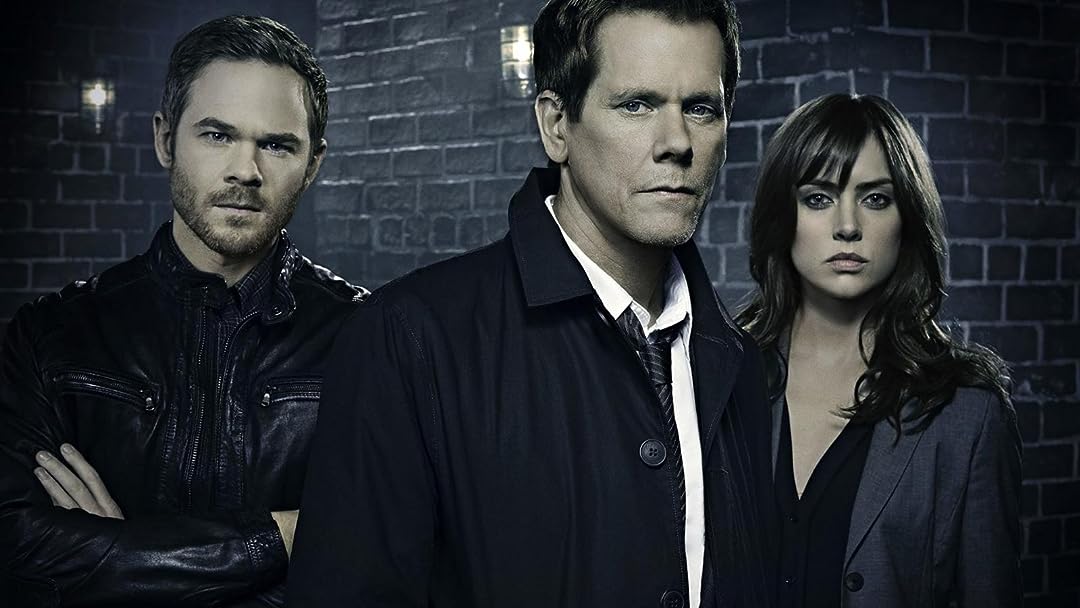 SampyReviewed in the United States on August 24, 2015
5.0 out of 5 stars
Excellent!
Verified purchase
Very gory and dark show, so if you don't like scary and bloody movies or shows then this is not for you. Kevin Bacon is so perfect for this role and his work is excellent. It is suspenseful and will leave you feeling "creepy crawly". I have to admit that the content is disturbing, sometimes uncomfortably disturbing so I usually like to follow up with something cheery and happy after watching this just to take the edge off the darkness. It is very suspenseful and has lots of surprises, just when you think a scene will be safe or calm your mind is totally blown and something INSANE happens. I recommend this show if you like suspense, crazy sadistic gore and psychological thrillers. If you like Kevin Bacon, then this is a must watch- starting of course with season one.
2 people found this helpful

Nora L. BrockhausReviewed in the United States on September 16, 2015
5.0 out of 5 stars
A fan's thoughts on The Following
Verified purchase
One thing needs corrected. Kevin Bacon's 6 year contract was only for Warner Brothers stating he was their guy for that time. If the show cancelled, they no longer had to pay him. It just protects them from him quitting or insisting on more money. This show has been very well, written, directed and acted from the pilot on. Ryan Hardy was a character I could believe and who I made a powerful emotional connection with very early on. Not only did I not miss any episodes, I have watched the seasons over many times. It is very hard for me to watch this last one, because the story isn't finished. The cliff hanger left it in a very interesting place to continue a mysterious new story line. Did I believe him when he told Lisa, "I can find anyone." I sure did. With his instincts and no FBI to hamper him, Ryan would have succeeded But he never got the chance.
One person found this helpful

MediaMuttReviewed in the United States on April 29, 2015
5.0 out of 5 stars
Great send off for the Joe Carroll character
Verified purchase
Great send off for the Joe Carroll character ! This season has been in my opinion a big improvement over last year (season 2) . I've read
that it's still not been decided if The Following will be back for a 4th season . They could wrap up this season on a high note instead of
trying to get another year out of this premise and characters . Sometimes a show can out stay it's life span/ popularity this year everything is in
place to end all storylines and be remembered for 3 good seasons of programs . May the correct decisions be made by the network and
producers of The Following .

Yessenia PerezReviewed in the United States on November 30, 2015
4.0 out of 5 stars
Nevermore.
Verified purchase
If you're a fan of the series, you'll notice that it lags with the absence of a main character (don't worry, they still linger in a psychological way), but I personally found that it ended on a high note. I loved that the core of the show stayed strong, supporting and complimenting each other all the way through. It's disappointing only in the sense that it was cancelled, because I felt like they could have done more with it. But they managed to tie up a lot of loose ends.

Terri McCranerReviewed in the United States on November 23, 2015
5.0 out of 5 stars
I absolutely love this series and was heartbroken to hear that Fox ...
Verified purchase
I started watching this show last week and every episode kept me riveted to my television. I absolutely love this series and was heartbroken to hear that Fox had cancelled it. I heard that Season Three was not as good as the other two seasons, and even possibly the reason the series was cancelled, but I disagree. I think that what Ryan Hardy was going through in Season Three was more realistic than other series about the BAU have portrayed their agents. Chasing serial killers for all those years would leave more scars than anyone could imagine. The writers were brilliant, the actors were amazing and I am seriously left wanting for more. Cudos to all that were involved in making this show great. I sincerely wish either Fox would change their minds or another network would pick this series up. There are a lot of fans out there that are wanting more!!!!
One person found this helpful

Ralph E. Bentley Jr.Reviewed in the United States on June 21, 2015
5.0 out of 5 stars
Could it be that it is hitting to close to home for the Elites that run our planet?
Verified purchase
Just as the series is getting even more interesting you cancel it?

Please put pressure on the network executives to produce all the seasons necessary to eliminate all the major conspiracies of serial killers in the series .

Niall MacLeodReviewed in the United States on February 17, 2021
4.0 out of 5 stars
Season Three is not as good as the first two seasons, but still worth watching.
Verified purchase
That said, it was certainly good enough to keep the show going for another season, especially with the set up at the end.
A fun ride, though!!!
Great acting, esp with the four-five main characters throughout the three seasons (or part of season three with Joe.)

Kathryn M Kash MurphyReviewed in the United States on March 3, 2021
5.0 out of 5 stars
Awesome!
Verified purchase
This show was so intense!! The relationship between the two main characters had me in the edge. Also, loved the music some songs I added to my iTunes library.
See all reviews
Back to top
Get to Know Us
Make Money with Us
Amazon Payment Products
Let Us Help You
EnglishChoose a language for shopping. United StatesChoose a country/region for shopping.
© 1996-2022, Amazon.com, Inc. or its affiliates