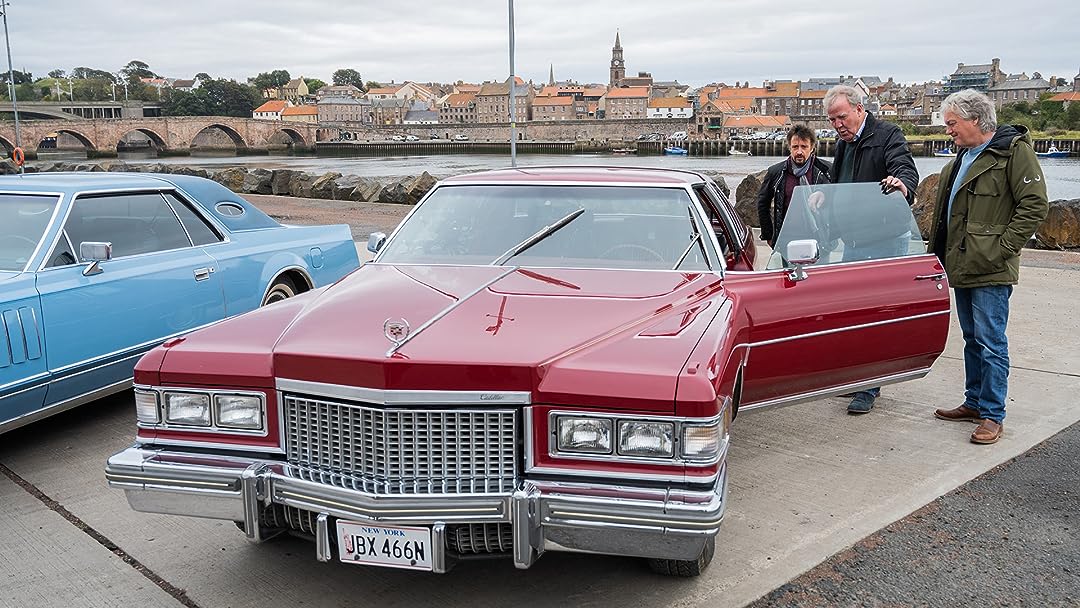 (1,130)8.72021X-RayHDRUHD16+
Confined to the UK by Covid, Jeremy, Richard and James embark on a Lockdown Special to find out just why American 70s cars never took off in Britain. At the wheel of a Cadillac Coupe De Ville, a Lincoln Continental and a Buick Riviera in stunning Scottish surroundings, the three hosts undergo many mishaps and adventures before embarking on one of their toughest challenges yet.

ViewerReviewed in the United States on August 18, 2020
1.0 out of 5 stars
2nd Episode?
Why won't you release the next episode we all understand its done and ready to go tho only thing that needs to happen is for it to be released!!!!
324 people found this helpful

NonyaReviewed in the United States on July 31, 2020
1.0 out of 5 stars
Season 4 Meh (Update )
I have been a Prime member so as to watch the Trio, long time fan from Top gear days! All the previous seasons were amazing. However, Season 4 not so much, Boating? Really? It was ok, well good. However. Since Episode 2 has taken so long and now Amazon wont release it as its finished I just cant give it more than 1 star. There is no good reason to hold on to it and NOT let your customers know of a release date Amazon! Customers have paid for Season 4 and a year of prime. After watching it tonight since it finally released. Id like to pull my 1 star and give it a 0/5....ohya I have to give at least 1 star.....Total rubbish and wasn't worth the wait...at all!
243 people found this helpful

RL StaffordReviewed in the United States on August 21, 2020
1.0 out of 5 stars
Where are the episodes for season 4
Totally disappointed in the lack of episodes NOT being released. This is ridiculous and points to laziness. Regardless of covid.
226 people found this helpful

PakayaReviewed in the United States on July 30, 2020
5.0 out of 5 stars
When is the next one
We've been waiting for a new one long enough. Watched the three seasons many a times.
109 people found this helpful

So what's with the long list there? That's all the live action "tv" series which Amazon Studios has somehow miraculously managed to release in the time since The Grand Tour's single-episode "season" 4 premiered. Despite the pandemic & all those other things that have made it impossible to give us at the very least the second episode, which has been cut, edited, and in Amazon's possession for months as of this writing. A long, long list indeed, and one which doesn't count stand-up comedy specials, or animated programs, or children's shows featuring mainly puppets--just tv shows that involve actors appearing on screen together. That also doesn't include the 5 other series set to premiere within the next 6 weeks. Yet still not even an apology, let alone any sort of reasoning, from Amazon over the intolerable delays on this, arguably their most popular series.

So...yes. The 1 star rating is very firmly given to Amazon Studios--not for the delay itself, which would be somewhat understandable given the state of the globe these days, but for the wanton disregard shown toward Grand Tour fans (who also happen to be paying customers). For a level of customer service only mildly better than that of the Spanish Inquisition. How bloody difficult is it to put out a freaking press release saying, "Hey, we understand you're tired of waiting, but we can't release this until X because of Y and Z."? If the Madagascar episode can't be streamed yet because rabid yaks are using the editing suite for a game of badminton, how difficult is it to just, you know....say so? Instead of pissing off the exact same audience which *still* refuses to watch the BBC program that got rid of these guys years ago?

As far as "The Grand Tour: Seamen" itself...it's solid. Comfortably a 4 star episode, not nearly on the same level as the trio's heyday on that other show, but very entertaining and holds up well over multiple viewings (which is more than can be said for a fair number of the season 1 episodes). And while yes, some people were apparently up in arms because they dared to use boats instead of cars and because of Jeremy Clarkson's choice of a t-shirt (not like Clarkson has ever offended anybody in the past. I mean, ever), it's still the lads capering about and doing the kinds of things we mere mortals can only dream of doing. Not to mention getting *paid* to do those things. The Grand Tour, much like its predecessor on BBC, is far less a show about cars (or boats, or t-shirts) than it is an escape from adulthood, back into the heady years of adolescent dreaming...and "Seamen" certainly captures those same emotions, albeit with a few less laugh out loud moments than in their prime.

Now if only Amazon can manage to upload another episode before COVID-43 arrives....

EDIT: The trailer for "A Massive Hunt" (the Madagascar episode) dropped today (11/18) on The Grand Tour's YouTube channel. They say it will finally be released on December 18th. Not that you'd know that from looking at this Amazon Video tab, but hey...

anothercustomerReviewed in the United States on August 2, 2020
5.0 out of 5 stars
Very entertaining to watch while you eat dinner
Yes people do complain it doesn't always showcase cars. This is NOT your typical "car" show. It's more of a MOTOR show and that includes a wide range of varieties of motor "vehicles". They do not just stick to cars but open your understanding of the motor industry as a whole. They present it in a fun way that helps the average person who may not know much about the motor industry understand the in's and out's. It's fun, entertaining and educational. It's really a great show to watch after a long day at work or just chillaxing while eating dinner.
73 people found this helpful

JohnReviewed in the United States on September 3, 2020
1.0 out of 5 stars
Don't mind me, just giving it a 1
So why the 1 star rating? Well, because it's just not I expected. I expected cars and maybe some over-the-top things like an actual season. I know COVID-19 complicated things... but it's always fine to delay til 2021 and launch with more than ONE episode.

Oh speaking of which, there is one other episode that is "completed" but ... where is it? I'll leave a 1 star rating for that one too, just saying. Regardless of how good it might be.
69 people found this helpful

C. RamseyReviewed in the United States on September 14, 2020
5.0 out of 5 stars
Great show, horrible fans.
This season proves that the only thing that is not adaptable in the Grand Tour nee Top Gear Universe are the fans.

In case you haven't noticed, The Grand Tour (and it's predecessor) is NOT a car show.

It is a travel show, a history lesson and a narrative of the modern world. An excuse to place three of the most charasmatic presenters ever in exotic locales, and allowing them to speak their minds.

The point is, if you tune in to the Grand Tour expecting a car show, then you have missed the point. Furthermore, expecting the Clarkson-Hammond-May trio to do nothing more than what they've done for the last two decades limits both the presenters and the viewers.

This season was fantastic. I do hope to see more
55 people found this helpful
See all reviews
Back to top
Get to Know Us
Make Money with Us
Amazon Payment Products
Let Us Help You
EnglishChoose a language for shopping. United StatesChoose a country/region for shopping.
© 1996-2021, Amazon.com, Inc. or its affiliates