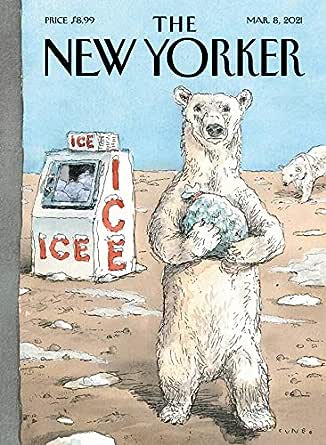 The print subscription includes digital access through supported Kindle devices and Kindle reading apps for iOS and Android devices. Available on these devices Certain magazines also include direct access through the publisher’s apps for those magazines, which you can download on iOS or Android devices. Learn more or check out the print subscription.

To activate your digital access with your print subscription purchase, follow the instructions below: Terms and conditions:See all terms and conditions
Available immediately on these devices and platforms
Kindle e-Readers
Fire Tablets
Fire Phones
Free Kindle Reading Apps

Enter your mobile number or email address below and we'll send you a link to download the free Kindle App. Then you can start reading Kindle magazines on your smartphone or tablet - no Kindle device required.

Enjoy a complete issue of the acclaimed weekly on your Kindle Fire each Monday--every story, every cartoon, everything in the print edition, and more. The New Yorker is a national weekly magazine that offers a signature mix of reporting and commentary on politics, foreign affairs, business, technology, popular culture, and the arts, along with humor, fiction, poetry, and cartoons. Founded in 1925, The New Yorker publishes the best writers of its time and has received more National Magazine Awards than any other magazine, for its groundbreaking reporting, authoritative analysis, and creative inspiration. The New Yorker takes readers beyond the weekly print magazine with the web, mobile, tablet, social media, and signature events. The New Yorker is at once a classic and at the leading edge.

Kindle Magazines are fully downloaded onto your Kindle so you can read them even when you're not wirelessly connected.

If you're interested in literary book reviews, reading commentary on popular culture, and enjoying political cartoons, the New Yorker magazine is perfect for your subscription collection. Started in 1925, the publication has yet to disappoint readers with substandard short stories or essay content. Despite having a heavy focus on the New York life scene, there is so much included on general arts and life that readers from all over the world continue to enjoy the magazine.

The New Yorker magazine is famous for its covers, normally created by a popular political cartoonist. These covers have made waves in the publishing world, as well as had a tremendous influence on art. None can say this as much as the Saul Steinberg illustration for the March 29, 1976, edition. Called View of the World from 9th Avenue, the drawing focuses strictly on a few blocks in Manhattan, with the rest of the world an afterthought.

A familiar illustration has often graced the cover throughout the past eighty-seven years. His name is Eustace Tilley, but he is no one of factual importance. The character was created specifically for the first cover and evolved into a mascot for the magazine. Eustace was based on the cartoonish image of Count d'Orsay found in the EncyclopÃ¦dia Britannica's 11th edition.

The New Yorker magazine has had a hand in bringing many popular movies to the big screen. Based on short stories, essays, and articles that have run throughout the pages, dozens of blockbuster and award-winning films have garnered attention by being featured in the magazine. These include The Hours, Adaptation, Angela's Ashes, Boys Don't Cry, In Cold Blood, and The Secret Life of Walter Mitty.

A subscription to The New Yorker magazine keeps you up to date on what's happening not only in the Big Apple, but also in art, literature, and politics in general. It lets you stay enriched wherever you are currently living with thoughtful essays, fiction stories, and articles that delve into every area of American culture.

What other items do customers buy after viewing this item?

4.4 out of 5 stars
4.4 out of 5
3,316 global ratings
How are ratings calculated?
To calculate the overall star rating and percentage breakdown by star, we don’t use a simple average. Instead, our system considers things like how recent a review is and if the reviewer bought the item on Amazon. It also analyzes reviews to verify trustworthiness.

Sarah
5.0 out of 5 stars Beware Amazon's $5 for 12 issues 'deal'
Reviewed in the United States on August 7, 2017
Verified Purchase
I love the New Yorker, but beware of Amazon's Lightning Deal '$5.00 for 12 issues' - the subscription automatically renews at the end of the three month period, charging you $99.00 for 12 months. They do send an email notifying you of this but it is easy to get buried in all of the marketing emails Amazon sends out.
Read more
1,774 people found this helpful
Helpful
Report abuse

Jess.
1.0 out of 5 stars Go for this "deal" if you want to pay double for The News Yorker.
Reviewed in the United States on June 28, 2018
Verified Purchase
This is a scam to lure one into paying $99.95, vs. a $50 subscription directly from the publisher. No help from Amazon to resolve this, just b/s.
Read more
515 people found this helpful
Helpful
Report abuse

Maybe this isn't the magazine's doing, and I'm sure it's all legal, just the usual fine-print psychographics-based snare of modern consumer sales, but it feels like they use every underhanded trick in the book to make this thing stick. No (!) order notices sent, on rollover from 12-week trial to a subscription. Then the subscription is automatically set up to renew. 47 week period, not a year, so it happens before you're expecting. Charged at 45 weeks. Doesn't alert you, show in "Your Orders" until a week after the "Order Date". Maybe it's in "Your Subscriptions" but who looks at that for no reason? Cancellation doesn't appear to take, when done through the website. Twenty minute, three representative tag-team ordeal to finally positively execute the cancellation.
Read more
523 people found this helpful
Helpful
Report abuse

Amazon Customer
3.0 out of 5 stars Read the fine print.
Reviewed in the United States on August 2, 2017
I like the magazine but didn't read the fine print and was really shocked when I was billed $92.00 for the automatic renewal.
Read more
670 people found this helpful
Helpful
Report abuse

Rafael
1.0 out of 5 stars Price gouging
Reviewed in the United States on April 28, 2018
Verified Purchase
I was a subscriber to the Kindle edition for about nine years, but the publisher recently raised the monthly price from $2.99 to $8.99. To me, this tripling of the price seems excessive, especially since Conde Nast Is known for raking in the money and The New Yorker's circulation has probably gone through the roof in the current political climate. In the interest of spreading the wealth, I have chosen to support publishers more likely to appreciate the support and not engage in price-gouging.
Read more
315 people found this helpful
Helpful
Report abuse

LLdemats
4.0 out of 5 stars I love this magazine
Reviewed in the United States on January 26, 2016
I love this magazine, but my Amazon.com experience with it has been very painful. As a Kindle subscriber, I had hoped that I would be able to access all the articles, especially the ones that come in the New Yorker daily emails with featured news items. However I have not been able to access them, constantly getting the message that I have read my first ten articles free, and that I would have to subscribe to continue reading. I " chatted" with the Amazon personnel about this, and wrote to Conde Nast, who kindly set up a log in for me. But this hasn't resolved the problem. Yes, I get the digital subscription on time, but the daily articles are the ones I'd likely read first, and even with this Kindle subscription, I can't get at them. Buncha crap. Not the magazine, I mean, just the bugs that make it seem that Amazon is selling a good product without really standing by it, or providing full service. My " chat" experience with Amazon was terrible....I got handed around to three or four different people, none of them really solving the problem. It's still not solved. Caveat emptor.
Read more
439 people found this helpful
Helpful
Report abuse
See all reviews

C B.
5.0 out of 5 stars Delighted
Reviewed in the United Kingdom on November 17, 2019
Verified Purchase
I was a little hesitant about a Kindle sub given negative reviews on the .com site (because of the structure of the sub on that site, seemingly the annual after the trial period, rather than monthly as here, not for the mag itself) and for fear of losing the distinctive NY typeface if rendered in an amazon typeface. That proves to be the case on Kindles, which use the Amazon typefaces, but in the Kindle for iPad version you can switch between a pdf (for the original typeface, and to see the cartoons) and the more readable (on screen) Amazon typefaces. You still get the illustrations (as opposed to cartoons, rendered only in the pdf) on both.
I’ve found at least a couple of engrossing articles in every issue so far, with sometimes complicated information made clear through accessible, gripping writing.
Read more
13 people found this helpful
Report abuse

BernieM
5.0 out of 5 stars World's best magazine...big boost, coming from a Brit!
Reviewed in the United Kingdom on August 25, 2020
Verified Purchase
There 's so much to read and enjoy in this famous mag. I just had to go for it when I saw I could get it on Kindle. Otherwise you have to order it from your local newsagent, maybe you sometimes forget, etc., etc. And once it's on your Kindle, it won't get spoiled, lost, used to line the cat's tray, etc. This new arrangement is perfect! bm.
Read more
5 people found this helpful
Report abuse

Stephen Bentley
3.0 out of 5 stars Not for me.
Reviewed in the United Kingdom on April 29, 2020
Verified Purchase
I thought this would be just for me, it isn't.
Read more
Report abuse
See all reviews