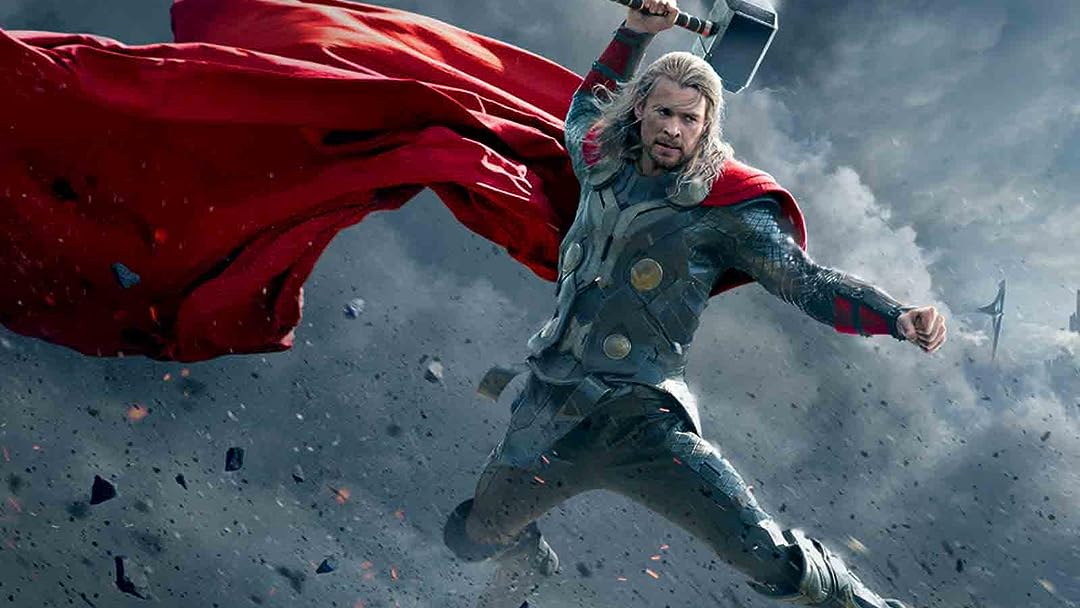 (24,167)
6.83 h 3 min2013X-RayPG-13
In the aftermath of Marvel’s "Thor" and "Marvel’s The Avengers," Thor fights to restore order across the cosmos...but an ancient race led by the vengeful Malekith returns to plunge the universe back into darkness.

CEReviewed in the United States on June 28, 2018
5.0 out of 5 stars
Great movie!
Verified purchase
I bought this and watched it when it first came out... but I must have been distracted while watching it the first time because I didn't go back to it until I was watching some of the newer Avengers movies. I was confused about some of the story line and decided to go back and buy all the Marvel movies and start watching them in order. I was told that I didn't remember this movie because it was so bad.... but after watching it (I think for the 2nd time) I really liked it! I love the humor that is put in on occasion to help offset the seriousness of the storyline. There were some parts that I felt were a little over the top, even for Marvel, but I think the movie was really well done.

Pro tip: don't watch the Thor movies out of order or some of the important parts of the storyline will not make sense! ;) Oh... and bonus features on all these movies are totally worth watching!!!

joel wingReviewed in the United States on August 14, 2019
3.0 out of 5 stars
Not the best Marvel offering but the ending is great
Verified purchase
Dark World was the second outing for Thor. It was criticized for its storyline, that while having some holes, was still very good.

The film revolved around the Dark Elves who were at war with Asgard and released a force called the Aether. They lost however, and Asgard buried the Aether, but then it was discovered by Thor’s love interest Jane Foster (Natalie Prtoman) and entered her body. That led to a new war between the head of the Dark Elves Malekith and Odin (Anthony Hopkins) and the Thunder God Thor (Chris Hemsworth).

There’s an underlying theme of family conflict and reconciliation as well. Loki (Tom Hiddleston) is imprisoned at the start for his attack on Earth that occurred in the first Avengers’ film, but not executed because his mother Frigga (Rene Russo) still loves him. She is Loki’s only real connection with another even though he doesn’t want to admit it. When Frigga is slain by the Dark Elves it starts Loki’s reformation as he’s willing to work with Thor for revenge. This relationship would be further explored in Thor Ragnarok.

I think the main criticism was that there was just too much darkness in the movie. There were not only the Dark Elves, but the dark Aether, and then Malekith turned a black Dark Elf into Darkness to attack Asgard. Seriously though I think a lot of people just felt like the story fell flat. Some of this is warranted. Dark World is not as good as the first Thor movie and nothing compared to Ragnarok. That being said, it’s far better than Captain Marvel, Spider Man Far From Home or even Dr. Strange which are the worse releases by marvel so far. Yeah, there’s a lull in the middle, but when Thor decides to work with Loki things get a lot better all the way to the climax at the end.
C

Shelley A. KlukiewiczReviewed in the United States on July 1, 2016
5.0 out of 5 stars
Loki Rules
Verified purchase
Great movie....liked better than first mostly because Loki had more screen time. Chris Helmsworth is great in title role, but Tom Hiddlestons tortured sensitive, yet scheming and cold Loki is my fav villain since the great Alan Rickman. He steals every scene. Great job by all the cast, great story and effects. Awesome chemistry between Loki and Thor..excellent casting choices. Hope to see Loki many more times....you just cant take your eyes off him when he is on screen, This role for him will go down as a classic...he captures the catlike strut, yet vulnerability of one who deep down just wanted equal time to Thors. Chris and his intense interactions are some of the best cinema has seen.
36 people found this helpful

One Broken ShoelaceReviewed in the United States on October 15, 2019
5.0 out of 5 stars
The Most Important Thing to Know is a Young Tom Hiddleston revs up the Loki
Verified purchase
The first (or second ?) introduction of Chris H and Tom H. And jeez these movies would not have taken off if it weren’t for those two actors.Watch it again and try to imagine Thor being played by some blond actor - Charlie Hunam (sp?). Try to imagine anyone who could be the bad guy (but is he? Really? I think the 1267 Loki/ smut online fan fics give you the answer) and move you to tears and make you LOL even if u r not a big LOLLER and buy matching sets of luggage and get his initials and yours ( married name - Hiddleston, of course) monogrammed on them, same as you did for the finger towels and the two dogs - other than Tom Hiddleston, a classically trained English actor whose body is by Mattel and everything else - voice, face, line delivery, smile, his big blue eyes and his perfect jaw and perfect arms and who has so methodically and carefully crafted the Tom Hiddleston Brand, which is a dreamy, talented , charismatic young man with the face of a Botticelli angel (oh he’s also quite upper class and I worry if his people were for Margaret Thatcher) who is good at so many things it’s just unfair - yet he comes off like a Lonely Beta. And fan girls (like myself) just eat it up.
I taped him “working the line” after a performance of “ betrayal” in London. It’s a very intense play and Tom has some very emotional moments. Yet he came bounding out of the stage door like a happy Irish Setter and hugged and signed pictures and took selfies with fans as if it was just exactly what he wanted to be doing for at least 20 minutes in the middle of a hot London day.
Although I think NYC and all the nonsense that went on in the Betrayal audiences and the Taylor Swift surprise “ all the time we were together I was boffing someone else or crying because I couldn’t and was stuck boffing silly old you instead” latest cavalcade of musical crap - in the photos I’ve seen of him walking the line after Betrayal on Bway - he looks a little tired.
A movie brought to A plus level and the first franchise I didn’t hate - thanks to TH and CH and all the other very well casted bunch and whoever directed this - Kevin Feige or Kenneth Branagh or my grandmother - this movie is truly a Phoenix.
2 people found this helpful

Edward normileReviewed in the United States on April 27, 2019
5.0 out of 5 stars
Underrated phase 2 film
Verified purchase
I get it. Everyone has heard how “terrible” Thor 2 is. I’m here to tell you it’s just not true. Granted it’s no ragnarock. But this is a quality film. Good effects, good actors. Builds upon already established characters. If I had to complain it’d be these things : Kat Dennings is terrible. There’s a reason she’s hardly in anyhing. She’s trying to hard to be funny. The villains are forgettable. He’s a dark elf. Need i say more? The earth parts of this film are unnecessary? Just boring really. But that’s about it. Shows a bit mire if his friends the warriors 3, and last sif. Who sadly is missing after this film. Loki as always is very good in this. Nice little after credits scene as well. Overall it’s well worth a watch. Doesn’t deserve the hate it gets
3 people found this helpful

Chris BozmanReviewed in the United States on July 28, 2018
2.0 out of 5 stars
The worst of the marvel movies so far
Verified purchase
I think this is the worst of the Marvel movies so far. I don't really have that much to say about it because the film just did not interest me at all. The first Thor film I also thought was bad, but I think it had some redeemable qualities because it at least introduced us to Thor, but this movie has one of the worst scripts ever. At one point, Loki and Thor even forge a temporary alliance. Keep in mind that Loki was the most powerful villain in the marvel films up to that point.

The cast is great, I will give it that, but this film suffers from deus ex machina. The characters are put into an impossible situation but through some random magic of Asgard, the heros win.

Underground RebornReviewed in the United States on March 16, 2014
4.0 out of 5 stars
It's all about the ending (Book 2 Pt. 2)
Verified purchase
As the Marvel Universe continues to the expand, we return to Asgard with a new chapter in Thor's world. While it is not a perfect sequel, it is definitely a step up from Iron Man 3.

In this film we see the aftermath of what The Avengers film has labeled 'New York' (The battle of New York) as Loki is imprisoned. At the same time the Thor mythos is expanded for fans of the film who had never read the comic books . The fans are introduced to Malaketh and the dark elves and a lot more character development with characters such as Odin Frigga and the Warriors Three. There is also an expansion on the love story between Thor and Jane, and if there is one thing that the Marvel films have done well it is the importance of romance. Once again, like the first, the story is driven by comedy with great one liners and a few very well executed surprises. This film however, is by no means perfect as the major failure is the a weak development on Malaketh. The acting choice is wise, but there is no story behind him and a villainous persona that holds no candle compared to Loki and because of that, you pretty much come into this film knowing that Thor is going to win and story is going to continue on. Yet in this film what makes it all worth while is the scene in between the credits, as the bigger and better story finally sheds a little of the mystery as well as an introduction to a very unusual character in the Marvel Universe.

Will there be a Thor 3, who knows. As of now Thor's world seems to be the one that is really being worked on and a lot of it is being developed on the show 'Agents of S.H.I.E.L.D.' Who knows what we will get, but for the time being let the story continue.
3 people found this helpful

Another Middle Class HouseholdReviewed in the United States on January 28, 2020
5.0 out of 5 stars
Enjoyed It!
Verified purchase
Seems like this movie was received and reviewed with not much enthusiasm. I am puzzled. The 4K video looked wonderful, and the Atmos audio was fantastic. The movie itself was entertaining. It had enough action and quiet moments to satisfy me. Thor had his good and not-so-good times. Loki was at his scheming and trickster best. The evil dark elves were sufficiently bad. And there was enough peril to the worlds to keep me intensely interested. So, yeah, I enjoyed it thoroughly.
See all reviews
Back to top
Get to Know Us
Make Money with Us
Amazon Payment Products
Let Us Help You
EnglishChoose a language for shopping. United StatesChoose a country/region for shopping.
© 1996-2022, Amazon.com, Inc. or its affiliates