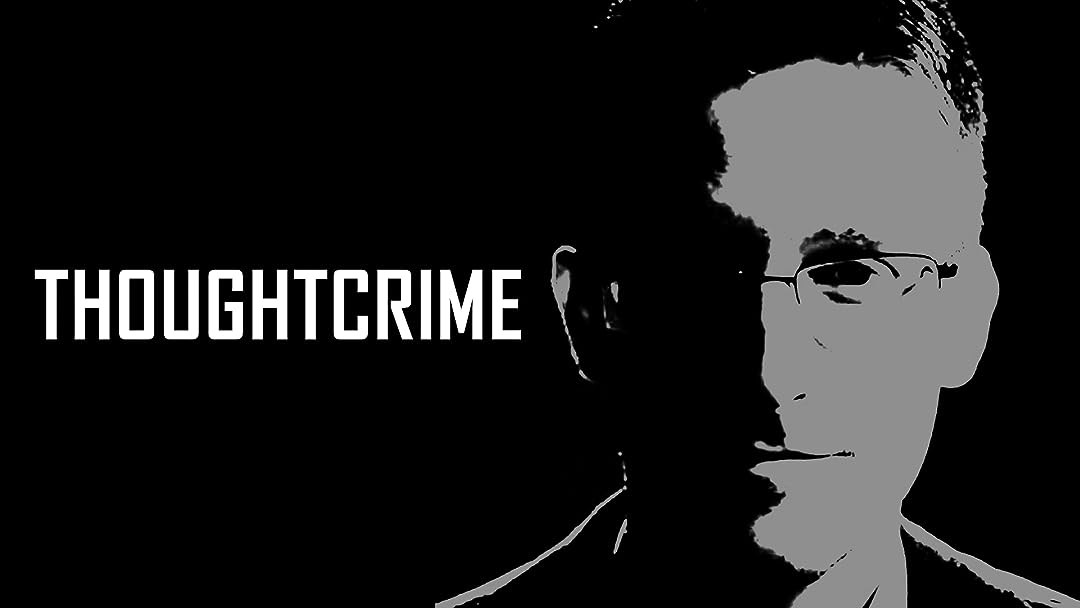 (43)
46min2017ALL
The disclosures made by former CIA employee Edward Snowden in 2013 not only shocked the public opinion but also showed the disturbing and frightening similarities between the world we live in today and that of Orwell's fiction, where independent thinking was censored and holding thoughts opposing or questioning those in power was considered a criminal act, a thoughtcrime.

S.Reviewed in the United States on April 5, 2019
1.0 out of 5 stars
The Spy Who Played Whistleblower
Verified purchase
The only people truly shocked by Snowden's disclosures weren't paying attention. Only a tiny percent of the intelligence Snowden stole concerned personal privacy violations. Most of Snowden's stolen intelligence concerned national security information damaging to the US, the UK, and their allies.

Amazon offers two fine books--Dark Territory by Fred Kaplan and How America Lost Its Secrets by Edward Jay Epstein--that will help people sift through the misconceptions this documentary creates.

Dark Territory is a general history of national cyberwar, including major Russian and later Chinese hacks from the 1990s onward.

How America Lost Its Secrets, written by a renowned investigative journalist, leaves little doubt that Snowden was a spy recruited by the Russians when he worked in Switzerland.

Snowden's sure to be happy that many think him a whistleblower rather than a loser traitor "protected" by Russian secret police. A raging egotist who lost bigtime speculating in futures trading, Snowden--proud to blame everyone but himself--was probably easily lured to espionage.

“It’s hard to pretend now that it didn’t matter that Snowden went to Russia,” said Epstein in a recent interview. “The view of Russia at the time was benign. Now it’s demonic.”

If anyone takes the time to read either of the books cited above, the fake hagiography in this documentary will be obvious. Snowden won't come off as raising important political points. Instead, you'll be angry that he duped you so easily. And angry at documentaries that make you feel self-righteous while being duped.

heartstroveReviewed in the United States on March 24, 2020
4.0 out of 5 stars
Snowden makes a good case, but oh, the irony...
Verified purchase
Although the media would mock such a statement, the person speaking so nobly about protecting the privacy of our citizens is even now doing just the opposite. He sanctioned the spying on the Clinton campaign, and the proof is quite public, just not allowed on the corporately-owned and globalist power-wielding Council on Foreign Relations, and a media and political spin--that is, propaganda campaign--has painted a false reality for the nation, making Trump and those who voted for him out to be corrupt and clueless. Sadly, it's easy for conservatives to blame the Democratic party, but the global elitist players have many on the Republican side of things, also. These are not people who believe in a constitutional republic, despite their words. They are globalists who are amoral, with no respect for God nor humanity, who lie, cheat, destroy lives, and even kill to accomplish the essentially communist "utopia" of the likes of Sir Francis Bacon nearly half a millennium in the past. The supposedly good, the cool, the A-list in our society, are those who will gladly destroy us if they are not opposed and soon.

So, while Snowdon is obviously a liberal, what he has done is, to me, not truly treason, although I don't really know his whole story. It is something I've been thinking about for some time. When the leadership has completely corrupted the system, when "the rule of law" comes out of the mouths of those who break it behind the scenes and accuse their opponents of doing so, and when the form of government which was laid out in a plan built on others before it yet is unique in its genius--when our form of government is in danger of being changed past the point of no return, and when one believes in this plan which can only be run by moral people who knows the need for checks and balances...but one doesn't believe war is the answer...what does one do? I think Snowden has some very helpful suggestions.
14 people found this helpful

Frank CastleReviewed in the United States on December 16, 2018
5.0 out of 5 stars
Extremely Important Reminder
Verified purchase
This is a great documentary. It basically plays Edward Snowden's poignant accounts and interpretations, then adds visuals. But the points made within are important--more now than ever.

With the Democrats and Republicans basically the same evil collective monster; the Deep State running things through lies, false flags, intimidation, spying, and big tech de-platforming tactics; and an outsider President who holds terribly incorrect ideas about Snowden and his like, we are in big trouble.

Shadowy figures lurk. They watch everything. They seek control. They seek power. Their existence has been outed for now, but what does that mean?

Think on this: The Pentagon just officially revealed the existence of UFO's, alien life within them, and strange "alloys" they have been studying. On mainstream fake news media. All sides. Officially. The American public looked up from it's cell phones a minute or two, farted, and went back onto Facebook. When I was young, we would have been freaking out, cheering, building bunkers in our backyards, and having parties with hair metal blasting.

This current America? We are a sheeple to whom these evil governments can do almost anything.

Heed the words of Snowden in this documentary. The poor guy suffered for us, for what was right. He is an early warning system sop many of us are simply ignoring.
14 people found this helpful

Rachel RReviewed in the United States on February 2, 2018
5.0 out of 5 stars
Edward Snowden - a true American patriot
Verified purchase
Chilled me to the bone. Edward Snowden is an extremely brilliant man with an even stronger moral compass. Snowden himself narrates this video in which he explains the importance of protecting one's privacy and what the government has been doing to take it from us. I wish this video could be required viewing for every middle schooler and high schooler in the country.
22 people found this helpful

SFO BroReviewed in the United States on July 4, 2018
5.0 out of 5 stars
RIP those who have lost their LIVES to THIS fight. Sadly, there are many. Important piece to watch here. Listen.............
Verified purchase
Many people have great problems with what Snowden did. I think he's an American hero who has fought for our flag and our people.
If he isn't a champion of America, I have no idea who is.
You should make the transcript of this available and present it to junior high school kids, without noting the author.

The questions are simple and the answers are even easier. And here's the classic kicker: Are you angry because of what he DID?
Or are angry because you got caught?

If anyone deserves peace and privacy in America, it is him.
13 people found this helpful

CecilReviewed in the United States on November 2, 2018
5.0 out of 5 stars
".... you shouldn't have anything to worry about"
Verified purchase
"Well if you aren't doing anything wrong then you shouldn't have anything to worry about."
Unless you are setting up a lemonade stand or selling real milk etc, etc to the infinite.
Giving the ACLU good vibes on this document is counterproductive.
There are plenty of lefties that would use private data against us in a heartbeat.
Just ask "Joe the Plumber". haa ha
No one ever knows what is up with the Orange one.
When he was a brat throwing his Cheerios around and making bad grades his Dad literally proclaimed him a king.
Just like the Imperial margarine commercial.
While our parents said we could be the President one day,,, Donald gets to be "King". Shucks.
Well he has congratulated 3 or 4 people on becoming dictators, I guess that's what Kings do.
Anyway, enough about the orange one.
As always, another hold my nose at the ballot box and bruise the head of the lefty serpent or it will bruise my heel.
2 people found this helpful

Tasha40Reviewed in the United States on November 9, 2020
1.0 out of 5 stars
Very Difficult to Digest....
Verified purchase
Edward Snowden may bring out valid points regarding our privacy (or the lack thereof), but it's difficult to hear his argument when I think of how he handled what he knew. Sometimes, a person's perspective on a situation may be on point (or right), but how they go about disseminating that intel can, at it's core, be unwise - to say the least. He was also in a very powerful position with what he knew. How did he handle the power position he was in? Like other countries in this technological age, the US has it's problems balancing power, but there are far more effective ways he could have tackled the issue besides doing what he did and running to Russia & China for asylum. It's difficult for me to see him as a National Hero under the circumstances.
One person found this helpful

bingbangboomReviewed in the United States on August 30, 2018
1.0 out of 5 stars
absolute garbage
Verified purchase
Snowden was not a CIA employee. so many false statements with this fake documentary! the only true Orwellian regimes today are the Russian and Chinese governments. Get a clue america! Snowden colluded with wiki leaks and wiki leaks has been proven to have colluded with the Russian government. Snowden is hiding in Russia to this very day and hasn't been pardoned for good reason. Russian troll farms have a term for people like Snowden, "useful idiot".
7 people found this helpful
See all reviews
Back to top
Get to Know Us
Make Money with Us
Amazon Payment Products
Let Us Help You
EnglishChoose a language for shopping. United StatesChoose a country/region for shopping.
© 1996-2022, Amazon.com, Inc. or its affiliates