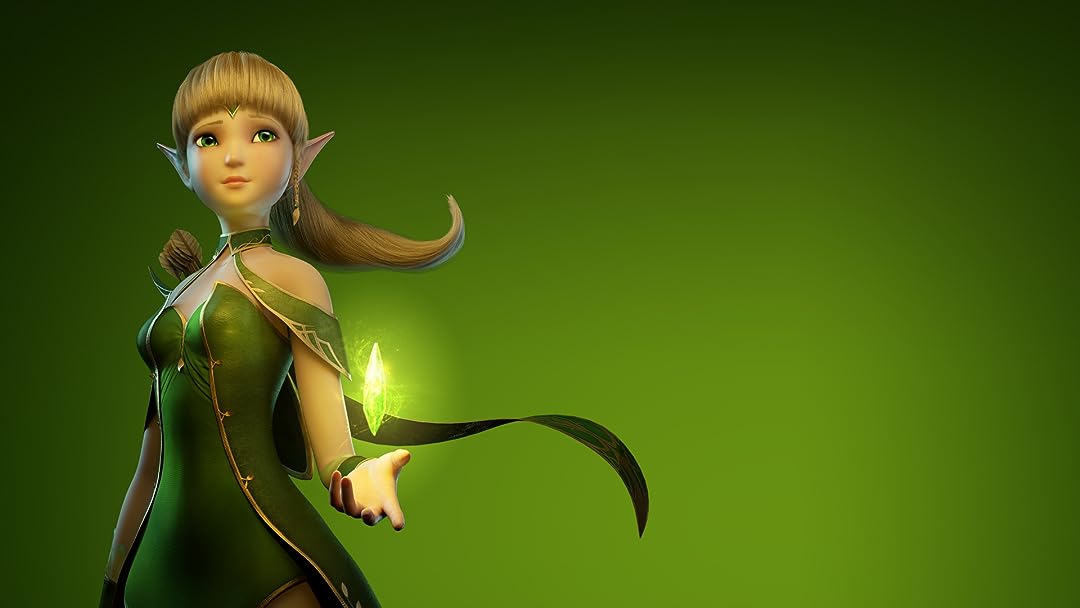 (314)
6.21 h 38 min20167+
In the mythical Elven world of Altera, an epic battle unfolds between the beautiful Princess Liya and the Dark Elf Elena, who has gained possession of a jewel so powerful it allows its holder complete authority over all Alterans.

C. FiskReviewed in the United States on August 7, 2018
3.0 out of 5 stars
Horribly Censored English Dub
Verified purchase
After seeing this film in Mandarin, I bought the DVD to add to my collection. It’s a follow up to the Chinese film and Korean video game “DragonNest.”

There were some pretty hilarious parts in the Mandarin version of the film that were carved out of the English dub - much to my surprise. Considering there’s nothing stating that certain scenes were sanitized for English speakers, I was more than a little disappointed in learning that I bought a censored film.

Scenes of note (these missing scenes are attached as images): When “Bow” and “Arrow” (“Swordy” & “Shieldy” in the Mandarin version) first meet the wierd toucan-like bird creature, the two groups fling their poop at each other. The poop-flinging crescendos into an all-out barrage of pink bird poop when the toucan steps it up and goes too far.

During the marriage ceremony, the human warrior offers to boost his dwarf friend up to see over the tall elf crowd. In the Mandarin bersion, the dwarf says he’s got a great view already (as his face is butt level to the female elves in front of him).

Also of note: The only person that calls the main hero “Fish” is the human warrior that first caught him like a fish on his airship. It makes zero sense for anyone else to call him “Little Fish” - especially Liya. He’s called “Lambert” in the previous English-dubbed installment of the film series.

Finally, there were no menus on this DVD - it literally started playing the film as soon as I put the DVD into the player. There are no extras like in the previous film nor are there any language options. It feels like a .MKV rip.

If you want to see the uncensored version, look for an English subtitled version.

FarthionReviewed in the United States on October 12, 2019
2.0 out of 5 stars
Would have been nice to have heard the dialogue
Verified purchase
I wanted to like this, but the soundtrack was horrible. The music and effects were louder than the dialogue almost all the time.

It was visually very nice, but the overwhelming of the music/effects over the dialogue made things a bit hard to follow in detail.
17 people found this helpful

I still ExistReviewed in the United States on August 9, 2018
5.0 out of 5 stars
Good followup
Verified purchase
Not as good as the original, "Dragonnest", but still worthy of 5 stars to me. I could have done without some of the silly childish remarks that you seem to find in all movies these days, including anime. I do have one other issue. There needs to be more - another episodic movie including more of the budding relationship between Fish and the beautiful Elf girl Liya and how they could have a long lasting relationship together, even with one being Elf and the other human.
5 people found this helpful

Amazon CustomerReviewed in the United States on December 26, 2020
5.0 out of 5 stars
this movie's better tatnic by ALOT !
Verified purchase
first of all, i'm the type of person that never reviews a damn thing.... but this film right here was awesome! it has a similar style to the " how to train your dragon" movies but i actually like this one even more because it's very focused on the battle between good and evil. it's simple yet complex at the same time! and definitely one of those movies you just don't forget about.
2 people found this helpful

StarvoipReviewed in the United States on March 26, 2021
4.0 out of 5 stars
VERY APPROPRIATE FOR CHILDREN
Verified purchase
MOST ANIMA/CARTOONS ARE VERY INAPPROPRIATE IN TODAY'S SOCIETY, IN WHICH IS TEACHING CHILDREN WRONG THINGS FOR MANY YEARS NOW AND IT NEEDS TO STOP, IT IS PURE EVIL AND WRONG TO TEACH ANY AND ALL CHILDREN THE WRONG AND VERY INAPPROPRIATE THINGS, THAT EVEN INCLUDES REAL LIFE. THIS ONE IS VERY CLEAN AND VERY APPROPRIATE FOR CHILDREN. I WOULD LOVE TO SEE MORE OF THESE TYPES OF ANIMA/CARTOONS ALL AROUND THE WORLD.
One person found this helpful

Murf the SurfReviewed in the United States on October 10, 2019
5.0 out of 5 stars
Dubbed from Mandarin to English I believe?
Verified purchase
What a beautiful and lovely love story between a reckless human boy named Fish and his fair maiden elf girl. I'd love to explain the whole story to you, however watching it instead would enrich your lives considerably. Have fun with this, even though is is a bit predictable with the devil evil sister who plays the gang to the diving ying. Ahhhh, the duality of love, hate, good, bad, evil and holy. Watch for the the part that redemption occurs into an epiphany of wisdom and reconciliation. Just watch the movie! Murf
3 people found this helpful

NicolasReviewed in the United States on January 7, 2021
3.0 out of 5 stars
Cute but..
Verified purchase
SPOILERS: Animation is pretty nice, but some of the store is lacking. Combined with sound issues (in some cases the background music is louder than their talking). Story lacks some areas, such as when she meets back up with Leaf, she says hello to the 'dogs' but uses no name as if she doesnt really know them. I think the prestory could be fun to see too, and maybe learning why Leaf has such a roar.
One person found this helpful

B. LaffertyReviewed in the United States on March 31, 2021
5.0 out of 5 stars
Worth Watching! Subtitles on.
Verified purchase
Watched this through Amazon Prime video. The animation is fantastic. The storyline is beautiful. I watched with English subtitles on which helped because some of the music washes out the dialogue. I would highly recommend.
One person found this helpful
See all reviews
Back to top
Get to Know Us
Make Money with Us
Amazon Payment Products
Let Us Help You
EnglishChoose a language for shopping. United StatesChoose a country/region for shopping.
© 1996-2022, Amazon.com, Inc. or its affiliates