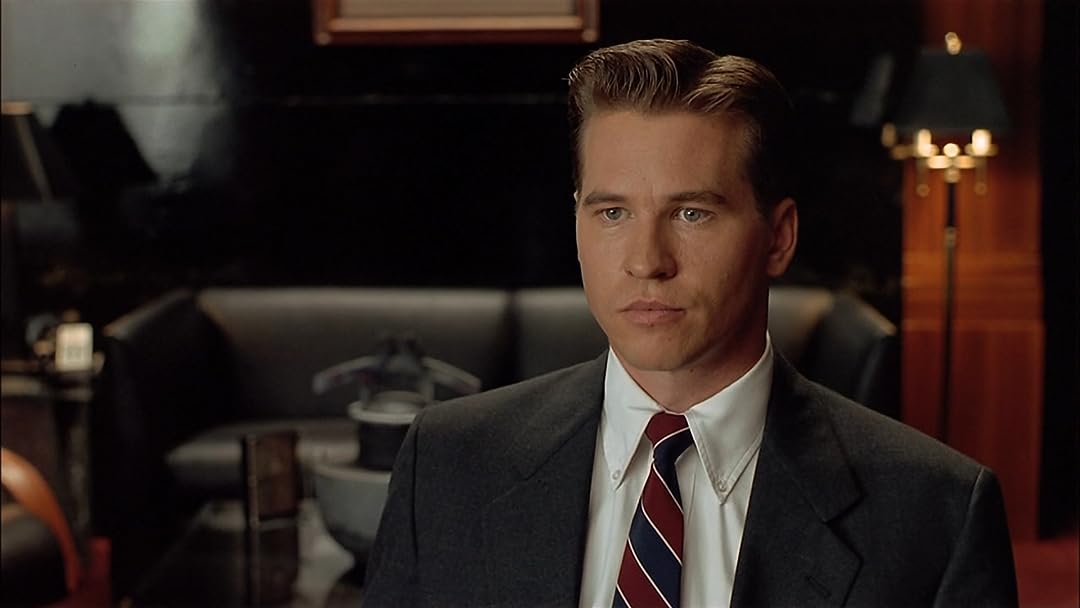 (3,604)
6.81 h 59 min1992X-RayR
An FBI agent of Sioux heritage investigates a series of mysterious murders on a Native American reservation in South Dakota - crimes his fellow agents aren't keen to solve in this excellent mystery.

Gerald MacLennonReviewed in the United States on October 23, 2017
5.0 out of 5 stars
Wasichu me, Native he
Verified purchase
Pretty damned authentic... sure, artistic liberties are taken, as with all flicks. I lived on the border of the Pine Ridge Reservation in 1968-69. One of my best friends was Mose Charging Thunder of the Lakota. We were there -- Wasichu me, Native he -- as events depicted in this movie were gradually heating up, eventually coming to full conflagration as the American Indian Movement (AIM) lead by Dennis Banks and Russell Means and 200 other members took occupation of Wounded Knee, South Dakota -- the site of the infamous 1890 US Army massacre of 300 cold, ill and hungry Lakota Sioux men, women and children. The date of the AIM occupation was February 27, 1973. The screenplay for this movie, Thunderheart, as I said, takes artistic liberties with portrayals and circumstances possibly because legal actions against parties involved were still languishing in the courts. Nonetheless, the cast and director perfectly captured the Lakota culture and people of 1960's Native America. Superb acting by Graham Greene (his 2nd major role after Dances With Wolves), Julius Drum, Sheila Tousey and elder Ted Thin Elk who portrayed Grandpa Sam, providing some of the funniest and most heartwarming moments in the film.
65 people found this helpful

Stephen C.Reviewed in the United States on April 26, 2020
5.0 out of 5 stars
One of Val Kilmer's best roles
Verified purchase
This is a movie I first saw when I was in High School, thinking it would be a harmless adventure flick. It wound up on my list of favorites to watch repeatedly. Not only does the film have a good, rousing plot (there’s a murder to solve, a definite crowd of thugs to dislike, and a young and wet behind the ears FBI agent to educate) it also has genuine spiritual mystery and soul. Native American mysticism doesn’t sweep in on a cloud of syrupy music . . . instead, it appears as a deer leap amid the rusting hulks of abandoned cars, a rush of wild wings at the window of a double-wide. The wise elder isn’t wrapped in a blanket by the campfire, he’s a rickety old man who likes to watch Mr. Magoo on his broken down TV. It’s moving and exciting to watch Kilmer grow up into the reality of this other world, and at the peak of the story line there’s a payoff—a single shot that dazzles me every time I watch this favorite of mine.
20 people found this helpful

S BisseyReviewed in the United States on July 5, 2019
5.0 out of 5 stars
Kilmer and Greene at their best
Verified purchase
This movie is so much more than a simple murder mystery. It's about corruption and loyalty and the love of heritage. Ray Lavoi (Val Kilmer) is an honest - if somewhat naive - federal agent sent to 'the Badlands' to work under SSA Frank Coutelle (Sam Sheppard), a highly respected superior agent on the Bear Creek Reservation. He meets tribal police officer Crow Horse (Greene) and are initially antagonists but soon become allies as Levoi begins to doubt Coutelle's motives.

Kilmer and Greene are at their very best, however enough cannot be said about Apted. His attention and respect to authenticity is fabulous. There was squalor and violence and tradition. Murder and betrayal and beauty. Sacrifice and ceremonies. This is how it was and this is how he gave it to us. And I LOVED IT since it hit theaters. Possibly my favorite movie ever ... or tied with My Cousin Vinnie.

Eric WarrenReviewed in the United States on November 5, 2020
4.0 out of 5 stars
Solid Thriller with a "Thunderheart"
Verified purchase
What's not to like here? Val Kilmer, who has been quite reliable for a couple of decades, in a starring role in this multi-layered "based on true events" early 90s thriller. The great Sam Shepard playing an FBI agent -- gee, where have we seen that before -- and the always fabulous Graham Greene playing a Native American. And the latter is not type-casting.

Kilmer's young, cocky FBI agent is dropped into a steaming pile of crap when he is hand-picked to investigate a murder on a Native American reservation, because he has Native blood. Yep, its about the optics, and right there, the viewer could be wading into a hornet's nest unless he or she weren't in the sure hands of writer John Fusco and seasoned director Michael Apted. Which he or she is.

Their sure hands set the stage for a great murder mystery, and as that mystery is peeled layer by layer more is certainly reveled. Politics prevail, the history of terrible treatment of Natives by the US Government is sensibly but not melodramatically inter-woven. The lucky viewer even learns more about one of the worst in a long line of tragic events for Natives, Wounded Knee.

Leaving the politics out, though, Kilmer, Shepard and Greene are first rate, as is the great Fred Ward and many Native actors and actresses. And, by the way, the South Dakota scenery nearly steals the show. Brooding, powerful, gorgeous and very well-shot by Oscar-winner Roger Deakins.

Alyssa A. LappenReviewed in the United States on June 14, 2021
5.0 out of 5 stars
Highly recommended historical film
Verified purchase
This is a remarkable film, based on true events. For anyone who didn't already know, there are lessons here about the massacre at Wounded Knee in Sioux territory in 1890, and part of the work was filed on the Sioux reservation where this occurred, at the U.S. national historical landmark.

Other parts were filmed on the Pine Ridge Sioux reservation and in the Badlands.

The acting and direction are superb, the John Fusco screenplay is first rate. He based it "loosely" on a 1974 incident at Wounded Knee. American Indian Movement at that time took over the town by that name in South Dakota to protest federal Native American policies.

Spoiler alert: Coutelle turns out to be a very bad guy, definitely not even a shadow of a hero.

Also in 1992, Apted had previously directed a documentary surrounding a Native American activist episode involving the murder of FBI agents titled Incident at Oglala. The documentary depicts the indictment of activist Leonard Peltier during a 1975 shootout on the Pine Ridge Indian Reservation.

The plot also weaves in a few other murders of Native Americans that are also based on real life 1970s incidents.

I found the movie thoroughly authentic and engrossing, not to mention heart wrenching.

HMS WarspiteReviewed in the United States on April 10, 2021
5.0 out of 5 stars
Past and present collide...
Verified purchase
The premise of "Thunderheart" is a bit contrived, featuring actor Val Kilmer as a part-Indian FBI agent working a murder on an Indian reservation. However, the plot is handled with a surprising amount of grace and a wry sense of humor. It works well as an action piece and as a snap-shot in time of how Hollywood perceived the situation of American Indians.

The FBI investigates a series of homicides on a Sioux Indian reservation in the Dakotas, possibly triggered by a dispute over mineral exploitation rights. On the case is young Special Agent Ray Lavoi, assigned in part for an Indian heritage he holds at arm's length. The case will bring Lavoi into close contact with the locals, launching a voyage of discovery, both personal and professional...

The movie features a heavy duty supporting cast, including Sam Shepard as the lead FBI agent, Graham Greene as the local law, and Fred Ward as the would-be developer. Rex Linn and Fred Dalton Thompson have cameos. Ted Thin Elk has an outstanding supporting role as Grandpa Sam Reaches, who with a certain amount of wry humor guides Lavoi on an unwanted but surprising spiritual journey. The ending is well-handled. Recommended.
6 people found this helpful

cc5449Reviewed in the United States on April 11, 2021
5.0 out of 5 stars
Riveting !
Verified purchase
This film is fantastic - I watched it when it was first released and it is still as suspenseful and and harrowing today. This is due to the brilliant directing from Michael Apted, an excellent script, and most of all the very sensitive and finely done acting from the lead, Val Kilmer. The story revolves around an FBI agent (with some Indian ancestry) being sent to the Badlands of Dakota to investigate a murder on an Indian reservation. His boss in D.C. thinks the Native Americans on the reservation may be more willing to work with someone who shares their ancestry. Kilmer's character, Levoi, is at first disdainful and brusque of the Natives he meets there, with what he sees as their superstitions and odd ceremonies. But he gets drawn deeper into the culture and the community and things aren't what they first seemed. The Native American actors are wonderful and so authentic to their customs, its hard to believe its a Hollywood film. Beautifully done film which I highly recommend.
2 people found this helpful

John Joseph DoughertyReviewed in the United States on April 17, 2021
3.0 out of 5 stars
Too many overlapping stories/motivations
Verified purchase
I wanted to like this movie more. I do like it a little, but the twist comes too late and with too few clues. I think they tried to involve too many things at once: U.S./tribal strife, Wounded Knee tie-ins, a murder investigation but with far too many overlapping motivations which only serve to confuse the viewer about every major character's own motivations, the main character's personal journey to reconnect with his heritage (against his better judgement for most of the film), and parallels to the FBI shootout at the Pine Ridge Indian Reservation in 1975...it's too much for one film! By the end I was just glad the movie chose one of them (mostly...) and laid it all out finally. Val Kilmer's character is supposed to have this gradual spiritual/mental re-evaluation as the story goes on, but that's portrayed in too many stilted, start-and-stop ways that, again, by the end the viewer is surprised that he finally chose one. Don't get me wrong: all those stories are worth telling, but this tried to incorporate all of them at once with the unfortunate end result of probably being too confusing for most viewers (I'm one of them). Still, I give it 3 stars for the effort.
One person found this helpful
See all reviews
Back to top
Get to Know Us
Make Money with Us
Amazon Payment Products
Let Us Help You
EnglishChoose a language for shopping. United StatesChoose a country/region for shopping.
© 1996-2022, Amazon.com, Inc. or its affiliates