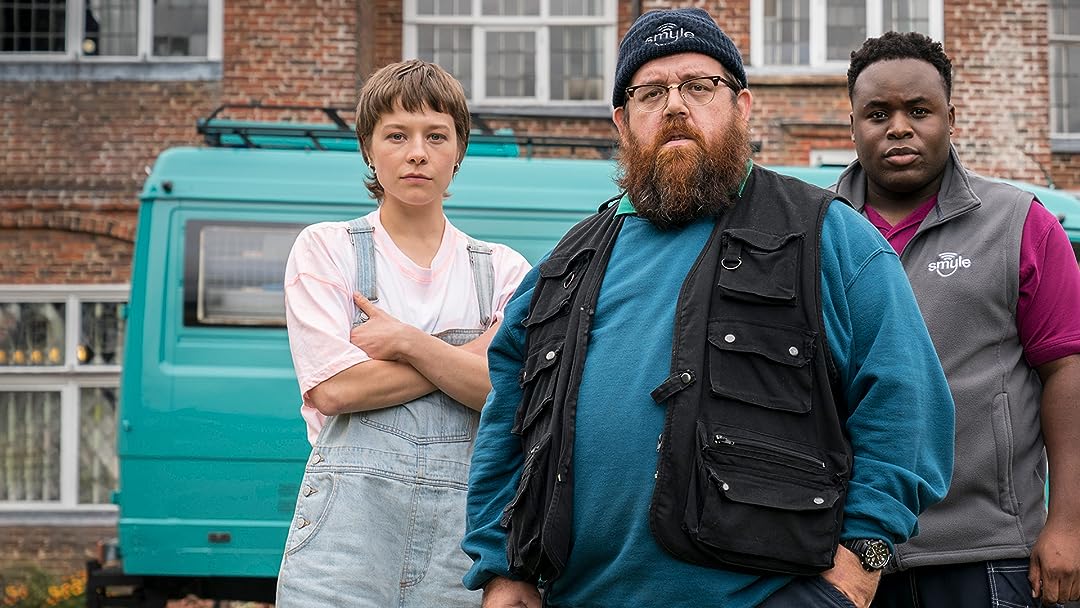 Season 1
(1,581)7.12020X-RayHDRUHD16+
Broadband installer by day, paranormal investigator by night, Gus is annoyed to be partnered with “noob” Elton, but comes to appreciate having someone along for the ride as they uncover a spike in supernatural activity. They’re soon joined by Astrid, who has ghost problems of her own, and the gang embark upon creating a ghost-hunting YouTube channel, uncovering a terrifying conspiracy as they go.

Chris FitzPatickReviewed in the United States on October 30, 2020
5.0 out of 5 stars
Underated, but good stuff. Great for the Halloween season!
It's a good spooky well-written comedy that's just odd enough to keep you guessing until the end. Plenty of twists and turns, but still manages to be very funny in a sophisticated way. It's a quick binge with only 8 episodes, but I do hope they get another season. What really surprised me was how well every episode tied into every other episode. Nick Frost is, of course, excellent, but the one who steals the show is Samson Kayo as his sidekick. They make the perfect ghost-busting duo. And of course, Malcolm McDowell is as brilliant as ever. Even though this is a comedy, it still pulls at the heartstrings and makes you care about the characters and their backstories (which are spread out in such a way to keep you in suspense up until the very last episode). I look forward to more of this, hopefully, since it was left in a bit of an open ending with plenty of unanswered questions.
210 people found this helpful

Quirky, intelligent comedy with "normal people" characters (not sexed, up perfect bodies with attitude like typical US fare)

BiancaReviewed in the United States on October 30, 2020
5.0 out of 5 stars
Frost & Pegg - You Can't Go Wrong!
I didn't recognize Nick Frost right away. Once I saw that it was him, I knew it would be worth watching. Some people never put anything out there unless it is great; such as Nick Frost & Simon Pegg. I didn't know what to expect so I'm not going to spoil it for you. If you want to see a very original approach to the whole ghost hunter thing, this is definitely it. And Malcolm McDowell is hilarious as Nick's dad! That's all I can say other than, watch it!
139 people found this helpful

BailligReviewed in the United States on October 30, 2020
5.0 out of 5 stars
Some Spooks and Some Laughs!
Pegg and Frost back together again! How awesome! Love that like so many of their films, they have balanced the scary, funny, and serious. Their unique take on buddy movies transformed into a wonderful streaming show! Have to recommend and hope for more episodes in the future. Enjoy!
68 people found this helpful

SilkReviewed in the United States on November 1, 2020
5.0 out of 5 stars
Simon and Nick saving the day again!
For those who have been watching this true dynamic duo since the days of Spaced, this show is going to feel both comfortingly familiar, yet fresh and fun as they always seem to manage to do even when taking their own turn at common tropes.

And as always the cast of friends that surround them are quirky, endearing, and all manage to have their origins and arcs through the series. For as short as it is, there is a lot already established and plenty to work from if they decide to keep it going.

Considering Supernatural is about to end its run, there will certainly be a real opening for a quality supernatural/sci fi adventure series to become the new main for fans if the genre and this one has real potential imo.

Now this show isnt about combat type action. its action is driven by actions rather then fighting. So it might feel slow for some. Especially those who want something more over the top like Shaun of the Dead. Its more like Spaced and their other story/character driven adventures.
55 people found this helpful

Michelle L. HardyReviewed in the United States on October 30, 2020
4.0 out of 5 stars
Terrific show
Easy to watch, terrific acting, good plot, and just enough mystery to keep it interesting but not to make it a writer's choice where you have no idea what the goal is or who the villains are.

Good to see Nick Frost playing "his" type of character. Pegg..ah well, at least he was with Frost :)

Would recommend to Pegg/Frost fans, supernatural fans, and fans of decent writing
54 people found this helpful

A. FranksReviewed in the United States on October 30, 2020
5.0 out of 5 stars
Loved it!
As usual, love everything with Nick Frost and Simon Pegg. Truth Seekers is fun and silly. I wouldn't call it scary, but it has some creepy/spooky moments. Malcolm McDowell is a great addition to the cast. Hopeful for future seasons.
54 people found this helpful

Cap'n CrustyReviewed in the United States on October 30, 2020
2.0 out of 5 stars
Yawn
Billed as a "horror/comedy", but sorely lacking in both, with the end result being enormously boring. For that, and the fact that the whole "team-fighting-supernatural-evil" has been done to death, it barely gets two stars.
43 people found this helpful
See all reviews
Back to top
Get to Know Us
Make Money with Us
Amazon Payment Products
Let Us Help You
EnglishChoose a language for shopping. United StatesChoose a country/region for shopping.
© 1996-2021, Amazon.com, Inc. or its affiliates