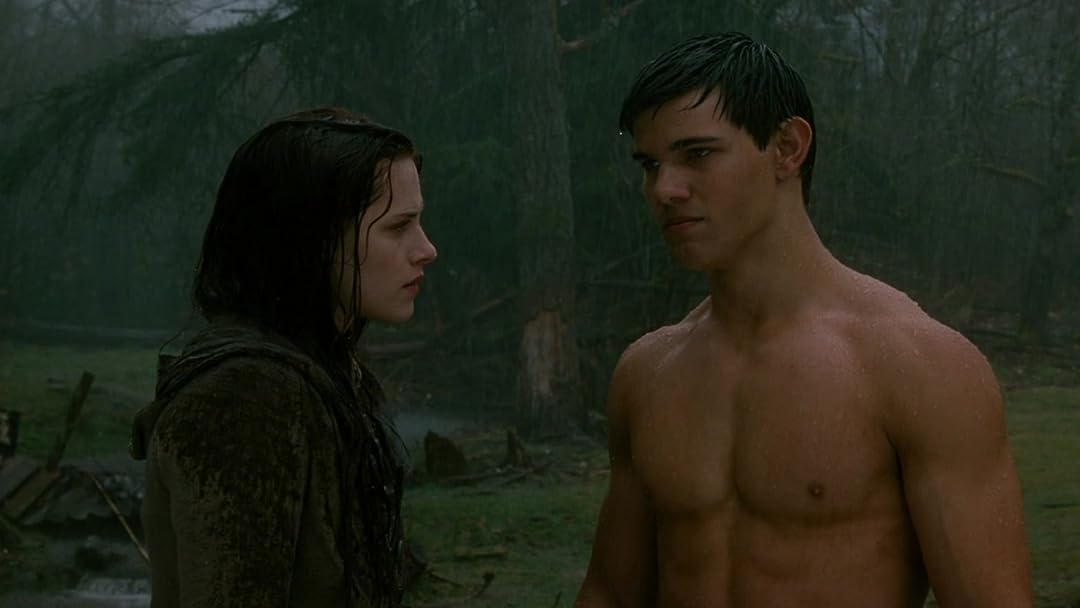 (16,342)
4.72 h 10 min2009X-RayUHDPG-13
After the abrupt departure of Edward, Bella develops a deep friendship with Jacob and is drawn into the world of werewolves. Based on the book by Stephenie Meyer.

Save with with the Twilight movie collection on Prime Video shop now.

Gabby Haff`11Reviewed in the United States on October 22, 2019
1.0 out of 5 stars
i hate jacob
Verified purchase
jacob is so unlikable. i dont understand why anyone would not be team edward. hate this movie because of taylor lotner.
22 people found this helpful

Paul w.Reviewed in the United States on March 15, 2016
4.0 out of 5 stars
Decent Teen Bop Movie
Verified purchase
I bought this movie for my girlfriend because she is a book nerd and has to read the book before she sees the movie so it makes sense. She doesn't always say the book was better. Sometimes she likes the movie better. In this case, she thought they complemented each other. The movie follows the book closely. It has to condense some for time allowed, that why so many movies are cut up in two parts these days. The YA genre is full of paranormal romance. This story was a refreshing spin off the usual formula of teen angst with supernatural/futuristic elements. I have to say, that I watched it too and while I wasn't as engrossed in it as my girlfriend was, it was easy to follow, well-written, and had a strong leading player. I recommend this movie whether you have read the book or not.
28 people found this helpful

B.L. HallReviewed in the United States on May 7, 2022
1.0 out of 5 stars
Help me.
Verified purchase
I just bought this video last night... maybe the night before. Yes. I watched it and realized I could by the entire 5 movie series for barely more money. You won’t let me cancel the order and rebuy. I am a 68 year old female. GIVE ME A DAMN BREAK.. I want to trade in the 2 twilight movies I bought for all 5 of them. Why isn’t there any place to get online help with a real person to fix this?? Sorry I am not a whiz bang expert with the internet. I do pretty well actually. I just goofed up and simply misread. I even noticed the error quickly. Usually it would take me a week or a couple of months before I noticed my blunder. You make everything else so easy. How hard can it be for me to trade up within an allotted time?? Customer first, right? I even have an amazon credit card AND I am a prime member. It is a 5.99 movie for Christ’s sake.

MistakeReviewed in the United States on December 13, 2020
1.0 out of 5 stars
God awful
Verified purchase
So annoyingly sophomoric and excruciatingly dragging.
The only thing slightly sufferable was the first installment, Twilight. Everything since New Moon is just garbage.
Come on, Americans, grow half a brain and get as far away as possible from trash like this.

MaximaReviewed in the United States on March 24, 2013
5.0 out of 5 stars
I was surprised!!!!
Verified purchase
I am not a movie watcher nor do I like Vampire movies so this was a total surprise to me. I kept seeing advertisements, pictures, toys and all sorts of stuff for this movie but could never understand the draw to it, another Vampire movie big deal..So I asked my 22 year old son about it. He said it was a romance movie and not much on the blood and gore, that picked my curiosity. Lucky for me, a few days later they had Twilight, New Moon and Twilight eclipse on cable to advertise Breaking Dawn 2 to DVD. So I turned it on expecting to turn the channel with in a half hour, boy was I wrong!!! I sat through the whole movie with my heart pounding, no vampire here.LOL... I found it to be a very addicting love story between a girl and her family, vampire and his family, werewolf and his family and how they all came together . It felt a bit like Cinderella but she actually had two prince charming, one a vampire and the other a werewolf.. Both with a few wicked step sisters and brothers thrown in, to make it interesting... I really liked this movie and all the the rest of the twilight movies... Matter of fact after seeing New Moon and eclipse I ended up buying all five of the Twilight Movies....Beware! if you watch one they might get their bite on you and you might end up buying all five movie to get your fill, of Twilight!!!!!
24 people found this helpful

J. BabinReviewed in the United States on June 16, 2016
1.0 out of 5 stars
DO NOT BUY AMAZON VIDEOS
Verified purchase
I purchased this movie and previously purchased a Vizio television with an AMAZON VIDEO App that includes an "Amazon" BUTTON on the remote control - PURCHASED not rented - in reliance on the availability of this AND MANY OTHER MOVIES for viewing by my PERMANENTLY DEVELOPMENTALLY DISABLED 26 YEAR OLD daughter on the AMAZON Video App on the remote because she is not, as a consequence of her disability, able to maneuver screens and log-ins on a television. In fact, I have purchased over 140 (ONE HUNDRED FORTY) movies on Amazon Video in reliance on her ability to view them on her television, which she is not able to do on other televisions we own, such as Sony televisions, having complex menu systems. Now, TODAY, JUNE 15, 2016, Amazon has decided to discontinue support of Amazon Video on her Vizio television and instead wants me to buy a Firestick for $50, which she will undoubtedly be unable to use! This is fraud. This is likely also a violation of the Americans with Disabilities Act, and just bad business!!!!!! Do not BUY ANY AMAZON VIDEOS unless you intend to purchase a new television every year to keep up with Amazon's unscrupulous and fraudulent business practices.
2 people found this helpful

Charity BishopReviewed in the United States on March 28, 2012
4.0 out of 5 stars
Liked It More Than the Book
Verified purchase
One of the most anticipated films of the year, New Moon is a stronger film than its predecessor and one that will delight its fans.

Haunted by dreams highlighting the eventual aging that will separate her from her immortal boyfriend, Bella Swan (Kristen Stewart) is eager to make the transition from human to vampire, but Edward (Robert Pattinson) does not want to damn her soul for all eternity -- the consequences of becoming a vampire. He wishes her to remain human, something that becomes dangerous when on her eighteenth birthday Bella sheds a drop of blood that causes Jasper, the newest "vegetarian" member of the Cullen clan, to lose control. This event compels Edward to decide it is too dangerous for her to be around him and that he must leave Forks. Breaking up with her and promising she will never see him again, Edward does not realize his actions will send her spiraling into a deep depression. Months later, Bella makes an irrational and stupid decision that causes Edward to reappear in her subconscious mind, warning her against danger. The "rush" causes her to make attempts to reconnect with memories of him through reckless behavior.

Recruiting her Indian friend Jacob Black (Raylor Lautner) in helping her refurbish two mountain bikes, the time they spend together soon makes his own sudden and inexplicable distance unbearable and eventually reveals a dark secret that might separate her from Edward forever...

The movie follows the book very well, so the same things I did not care for in the novel also make it onto the big screen. My biggest complaint is Bella's emotional state and how she falls apart without a boyfriend. I find that unforgivable and in direct contrast with strong heroines who pull themselves together and attempt to move on rather than plotting ways in which to endanger their life just enough to see ghosts from the past. That kind of love is dangerous and obsessive rather than emotionally fulfilling and true. Most of Bella's actions can be called into question due to their selfishness, including using Jacob -- she takes advantage of his friendship knowing what he feels for her and while she does keep him at a sort of distance, one cannot help feeling sorry for him in the end when she cruelly reminds him that it "has always been about Edward." Poor Jacob never had a chance, although in some respects the audience might find him a better match for her.

However, the film is fun to watch and memorable for its improved dialogue. There are still many corny moments and certain comments prompted titters from the audience, but it is a stronger installment than the first and has good pacing... and finally, a studio has come up with a decent werewolf that is neither a puppet nor a badly-done CGI "were-rat" (Harry Potter, I am looking at you!). These giant, fierce wolves are magnificent. In fact, the only thing I did not like about the filmmaking style was that often action scenes left me wanting to see more since the shots were so quick it didn't allow me to really appreciate all that was happening on-screen. The costumes, production design, close-ups of the characters, the distinction between human-drinking and "vegetarian" vampires through the different colors of their eyes and notable guest appearances were great. Veteran actor Michael Sheen hams it up as the darkly comical leader of an Italian clan of vampires known as the Volturi that brought to mind some of the better moments of Interview with the Vampire, but with a modern twist. He is joined by a cast of familiar, sneering faces that also includes a sinister Dakota Fanning.

A charming sense of humor and an improvement in acting assists this film in being a decent sequel and a certain success at the box office. In spite of the times I wanted to slap Bella, it was more entertaining than I anticipated.

EinsatzReviewed in the United States on April 8, 2013
3.0 out of 5 stars
"Bleeder!"
Verified purchase
Hmmmmm, I'm still not seeing what made this so important to so many people. The plot is all over the place, the weirdest distraction being an abrupt road trip to Italy to keep Edward from sparkling inappropriately. If there was meant to be any drama or suspense I haven't seen it anywhere. All I did see was that dreary, drab Bella Swan moping endlessly. Not that it was easy to distinguish her lifeless behavior from her normal expressionless demeanor. When this sourpuss wasn't moping, she was nagging BITE ME! As underplayed by Kristen Stewart, Bella just isn't a compelling character. She's a drip. Yet she still has boys stacked like cord wood wanting to be with her. Why?
Why moon over a dead guy when she has a perfectly good werewolf in her own backyard?
None of this makes any sense (I can only suspect that the books manage this better, but because of these movie adaptations, I still have no incentive to read them.)

Insult to injury, they waste the considerable talents of Graham Greene in a throwaway role that hardly allows him any distinction; his part could have been played by anyone. They could have even used CGI for the part, made him as cartoony as the werewolves.
10 people found this helpful
See all reviews
Back to top
Get to Know Us
Make Money with Us
Amazon Payment Products
Let Us Help You
EnglishChoose a language for shopping. United StatesChoose a country/region for shopping.
© 1996-2022, Amazon.com, Inc. or its affiliates