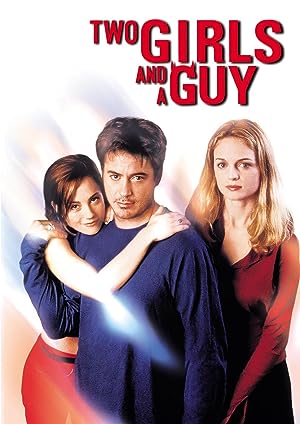 Two Girls And A Guy

(172)
5.51 h 24 min1998R
A comedy/drama about a struggling New York actor who is confronted by his girlfriends when they discover that he has been two-timing both of them with each other.

Gary AndersonReviewed in the United States on November 5, 2009
4.0 out of 5 stars
Sometimes you have to look deeper
Verified purchase
First of all I'm surprised this went to Blu. I remember seeing this in the theater when it first came out and instantly liked it. Going in though, you have to be aware that this is a 100% dialogue driven film. There's no action really, there's only three actors in the movie (well five, if you count the two in the very beginning for about two minutes). If you go into this expecting anything but essentially a theatrical play, then you may be disappointed.

Personally I think this is one of Robert Downey Jr's best roles to date, along with Less than Zero. I think roles like this, in which he shines so well as the perennial f*** up, doomed by his own inabilities to accept the fact that there are people who will not just abandon him at the slightest whim, hits too close to home for many people. They can't separate the fact that he's acting, from his real life struggles with drug addiction and other things.

And as such, when he puts on a great performance, people toss it aside and say "it's just him playing himself". Which is a great disservice, I think.

Heather Graham is very good in this, as is Natasha Gregson-Wagner (daughter of Robert Wagner and Natalie Wood), although Wagner can be EXTREMELY grating after awhile. She comes off as simultaneously cute & sexy, and irritating. Eventually you're waiting for someone to just yell at her to shut up.

But all three actors do a very good job with this, and from what I've read there was virtually no script. It was all improv, and I think that speaks volumes to how good these actors are.

I've read reviews of this which say that it's a movie where people just talk about nothing. And that's not true at all. It couldn't be farther from the truth. This film, while not a perfect film, is a great film as it pertains to relationships. I think many people watching can relate to this predicament that Downey Jr. finds himself in.

Perhaps not the exact situation, but we've all lied to significant others. We've all been involved with people and perhaps you don't feel exactly the same as they do, but you lie and say you do. If only to make them feel better. But that ends up hurting them anyway when they find out.

Here we have Downey Jr. who's dating two women simultaneously, all the while telling them that he loves them, and only them. Neither have any clue that he's doing this with someone else other than just them, thinking he's a one woman man.

CustomerReviewed in the United States on August 22, 2013
2.0 out of 5 stars
Old Worn Out VHS [Rental]
Verified purchase
The playback quality is very distorted,and that famous "love scene" is only slightly raunchier in the NC-17 version than the R-rated version,and it only involved some use of hands on the part of Heather,as far as what Robert "the brown derby" Downy did,it was exactly the same.Thorough.

I played both versions of "that scene" side by side,and they're pretty much the same.So I would stick with the r-rated dvd version,and be happy,and if you can get a region 1 nc-17 version on dvd,let me know.Please.
2 people found this helpful

Crystal BramlettReviewed in the United States on November 6, 2020
3.0 out of 5 stars
I could take it or leave it
Verified purchase
A little confusing and very sexual with no nudity

Amazon CustomerReviewed in the United States on August 26, 2018
1.0 out of 5 stars
One of the worst movies I have ever seen
Verified purchase
Every once in a while you come across a movie that seems good on the cover but ends up being horrifically bad. This is one of those movies. I came across this movie on Amazon somehow and thought it might be a nice rom-com. Boy was I wrong. It's a talk-fest, filthy movie with no apparent point. The story starts with two girls outside of a building. A predator tries to make a move on one girl but slinks off when his own girlfriend shows up. The two girls start to talk and realize they are dating the same guy. They break into his apartment and confirm their stories. Up to this point, the movie is bad but still dangles the hope of being OK. Then the guy shows up and the thing turns into a bizarre talk-fest with no apparent organizing theme and a raunchy scene in the middle. It ends up with one girl disappearing with no explanation and the other one staying with the cheating guy with no explanation. If you like artsy films which seem like they might suppose to have some kind of meaning but are really just garbage, you might like this film. If you are looking for a rom-com, just about anything, including a horror movie will probably be more satisfying. I cannot with a good conscience recommend this movie to anyone, although apparently some of the other reviewers liked it, so maybe I'm just missing something.
One person found this helpful

Kim WachowiakReviewed in the United States on April 20, 2016
5.0 out of 5 stars
Love the plot
Verified purchase
Love the plot, but sad that him and the blonde left the other girl out of it. But it was so good the way he tried to lie himself out of dating both girls.
One person found this helpful

charlz42Reviewed in the United States on September 7, 2018
1.0 out of 5 stars
One star, and it’s only because RDJ is in it.
Verified purchase
Honestly this movie is ridiculous and I love RDJ, so that says a lot.

a movie fanReviewed in the United States on February 3, 2018
4.0 out of 5 stars
Film rating only
Verified purchase
Amazon's page doesn't say so, but the disk contains both the R-rated and NC-17 versions of the film.
2 people found this helpful
See all reviews
Back to top
Get to Know Us
Make Money with Us
Amazon Payment Products
Let Us Help You
EnglishChoose a language for shopping. United StatesChoose a country/region for shopping.
© 1996-2022, Amazon.com, Inc. or its affiliates