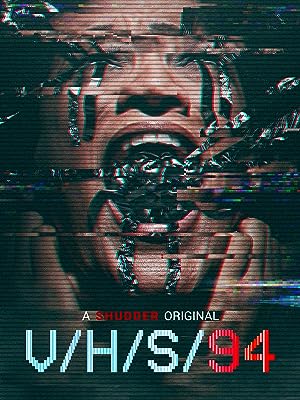 (70)
5.51 h 43 min2021X-RayR
After the discovery of a mysterious VHS tape, a brutish police swat team launch a high-intensity raid on a remote warehouse, only to discover a sinister cult compound whose collection of pre-recorded material uncovers a nightmarish conspiracy.

ChristopherReviewed in the United States on October 7, 2021
4.0 out of 5 stars
A redeeming entry after Viral
Verified purchase
For those of you who enjoyed the first two films, but were disappointed by VHS: Viral, most of you will be very pleased with his entry. The stories match the creativity and excitement of the first two films, with some great practical effects to boot. As with the other films, it's the individual vignettes that make the film; the shell story just loosely holds them together. Definitely worth a watch this Halloween season!
7 people found this helpful

Slasher DivaReviewed in the United States on October 7, 2021
4.0 out of 5 stars
Don't Go In The Storm Drain!
Verified purchase
I loved all but one of the segments in this installment of the VHS franchise. It was creepy,at times scary and in one segment in particular, very gory with great Gore fx. The Empty Wake and The Subject are my two favorite segments. Storm Drain, about a mythical rat man was good too. The wrap around was a bit weak but I can live with that. If you liked the first 2 you'll most probably like this one.

I think it's well done horror film and Shudder is well worth the price. I highly recommend it especially for this Halloween viewing season.

Jonathan M. BermanReviewed in the United States on October 6, 2021
1.0 out of 5 stars
Hot Garbage
Verified purchase
Okay... after barely being able to get through this movie, I will say it's hot garbage.

I could barely get through this movie, most of the stories are incomprehensible, boring, unentertaining, it looks like it was made for so cheap, and at times no one was even trying... it's like a bunch of student films put together. I didn't think it could be worse than VHS Viral but it's exponentially worse.

There's almost no redeeming qualities to this movie. the acting, directing, story, if it even had one... is just horrible. A complete waste of time.

I can guarantee you the current high rating on IMDb is from shills.
4 people found this helpful

JohnnyReviewed in the United States on October 10, 2021
5.0 out of 5 stars
Don't listen to the haters.
Verified purchase
The movie is filled with fun short films. The effects appear to be practical, the details in the movies line up with the year 1994, the ideas are interesting. The only folks who don't like this flick are the types that are looking for the next horror masterpiece and were gravely disappointed. Go into this movie looking for a fun time, regardless of how much cheese is found in this movie. It will definitely give you plenty to appreciate. To circumvent these undeserved single stars, I will give this a five. Maybe others will follow suit because this film deserves at least a three and a half in my opinion.
4 people found this helpful

MyyrdraalReviewed in the United States on October 18, 2021
5.0 out of 5 stars
Paranoid Android
Verified purchase
I'll try to keep it spoiler free.

This collection of shorts is absolutely fantastic, regardless of whether you've seen the other VHS's.

It contains a short that explores a "mad doctor" who has found a way to replace the human brain with a synthetic one - and attach sharp metal objects to the body in the meantime.

This single short is one of the most human, most terrifying segments of film I've ever seen, and the "cyborg Death's Head" creature that awakens after the alarm triggers and begins to marauder through the Jakarta police squad is still haunting my dreams, a week after viewing.

I can still hear his footsteps pounding unexpectedly down the hallway.

The rest of the shorts are all great but this one really gripped me. You feel empathy for the cyborg girl, yet terrified of her counterpart, while it meets out justice for the dead doctor.

Much to love about this collection!
One person found this helpful

Joseph A. ArdineReviewed in the United States on October 27, 2021
3.0 out of 5 stars
Mediocre At Best...
Verified purchase
Each V/H/S film is a mixed bag. Each film usually has one great segment, one or two that are mildly interesting and one bonafide stinker. In the first V/H/S "Second Honeymoon", in V/H/S 2 "Slumber Party Alien Abduction", and in V/H/S/ Viral "Parallel Monsters" were in my opinion the big stinkers. Though to be fair, Viral's entries were the weakest all around.

In each entry, the wraparound stories are truly hit or miss...much like Viral, 94's wraparound was really awful. In trying not to spoil anything, the big "reveal" was just a cringe inducing joke of a reveal that made one's eyes roll.

As for the segments, "Storm Drain" was quite strong, though I would have liked to see a bit more, possibly a tighter ending. "The Empty Wake" was really fun, but perhaps too much build up, not enough of the great effects! But after these two segments I was really enjoying myself and thought this V/H/S would "buck the system".

"The Subject", which was done by the same director who brought us "Safe Haven" in the second V/H/S installment, was very solid and quite enjoyable. But all three segments were soured by the cringe worthy "Terror" segment and the flaccid wraparound conclusion.

"Terror" was just really weak and stupid - *SPOILER*. Really!? The militia's goal is to use vampire blood as an explosive? And making vampire blood the equivalent to C4 was just so damn corny. This was almost the perfect V/H/S if it wasn't for the last segment and crappy wraparound. A big, big letdown.

The majority of the gore was topnotch. Maybe one or two quibbles with some of the heavier cgi blood sprays, gunfire, and blade stabs etc. But for the most part it was nice to see some great gore. The acting for most of the stories was excellent with certain ones like "The Subject" blowing others away - the crazy doctor Suhendra was a treat to watch in his acting!

nickReviewed in the United States on November 27, 2021
2.0 out of 5 stars
The VHS movies continue to be an example of all the worst parts of the found footage genre
Verified purchase
There is only one segment of this movie with even a hint of talent and that would be The Subject, written by Indonesian director Timo Tjahjanto. Leave it to the Asian guys to have the only talent in an American film.
I have a hard time believing the people who write these movies actually think what they are writing is any good. Everything is so aggressively stupid that it makes it hard for anything to be entertaining. The narrative with the SWAT team is horrible, just plain bad, and I dreaded every time it showed up on screen. And that pretty much continues for the whole movie, with only The Subject as being the standout because it is refreshingly original, violent, and has some decent practical effects. The Subject is the only reason this movie gets two stars, otherwise it would be zero.

M. TURNERReviewed in the United States on October 26, 2021
1.0 out of 5 stars
There was a lot of talent on display, just poorly.
Verified purchase
The VHS franchise should goths way of the dodo, much like other franchises in horror and other genres. VHS is an excuse to reduce picture resolution to hide all kinds of movie-making sins. Found-footage can be technically quite complex, but as in this case its skill and creativity is betrayed by the whole thing being nothing more than a series of FX-driven mostly-POV vignettes. Each vignette is overly long and meh, at best. At worst, you're fast-forwarding through to get to something interesting, which means you'll zip through this feature in twenty minutes. At least the filmmakers get a project listed on their IMDB pages, I guess. -- 2/10. Not Recommended.
See all reviews
Back to top
Get to Know Us
Make Money with Us
Amazon Payment Products
Let Us Help You
EnglishChoose a language for shopping. United StatesChoose a country/region for shopping.
© 1996-2022, Amazon.com, Inc. or its affiliates