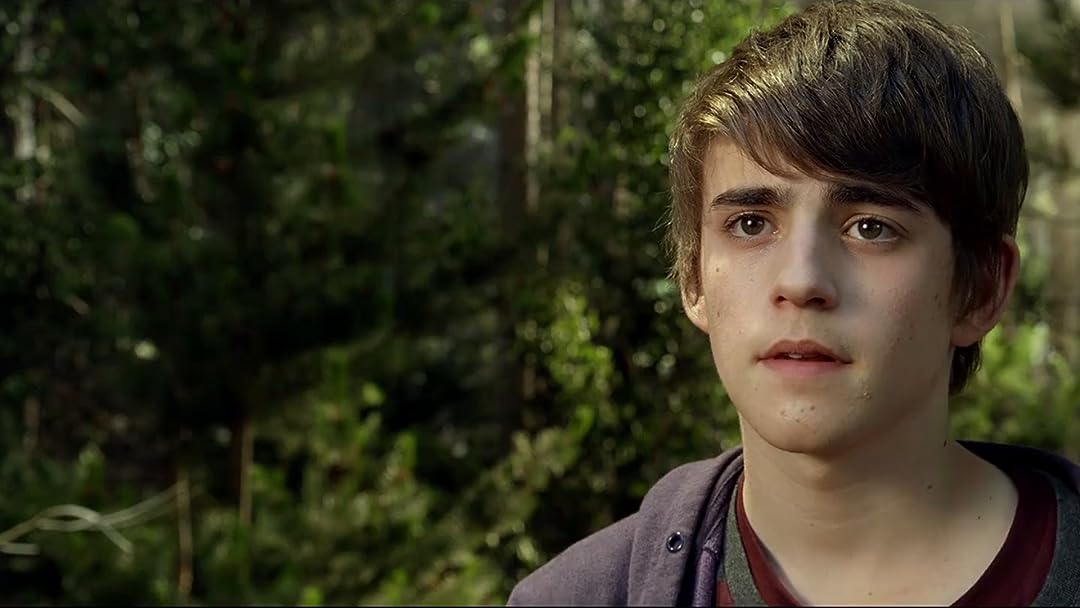 Walking With Dinosaurs: The Movie

(3,062)
5.21 h 27 min2013X-RayPG
HD. A little pachyrhinosaurus becomes an unlikely hero to his herd in this epic prehistoric adventure.

littlefarmReviewed in the United States on April 8, 2019
3.0 out of 5 stars
Not worth the time
Verified purchase
The DVD has excellent graphics and decent music, but I'm afraid I cannot compliment it further. I was excited to see another good dinosaur film, but the movie fell short of satisfaction and leaned more towards annoying. The narration and dialog made me wish I had the Blu-ray's voice-over-off version. I'm fine with the characters communicating without moving their mouths, but it would be nice if they kept most of their thoughts to themselves. The main characters are a bunch of chatter-boxes with distinct voices who constantly interrupt the viewer's attention to the movie. The dialog could be described as Ice Age's Sid the Sloth narrates 87 minutes of Bill & Ted's Excellent Adventure.
The best actors in the movie are the carnivores, who communicate perfectly without words.
I think the writers/producers could have taken a few movie-making pointers from Disney's Dinosaur and BBC's TV series Walking with Dinosaurs, or even the 1988 Land Before Time cartoon. All exhibit a better use of dialog, visuals and sounds.
This movie's PG-rating is for creature action and peril, and mild rude humor. I failed to find the humor, but I suppose if you're showing this to very young children, parental guidance may be needed to explain some animal behaviors.
Children up to about 4 or 5 may be entertained, but if you want a dinosaur movie that won't annoy adults or bore the other kids, I'd suggest spending your money on a more engaging family film.

Jason Scott WhetzelReviewed in the United States on March 1, 2020
5.0 out of 5 stars
My 3 year old never gets tired of this movie
Verified purchase
This movie is fun for all ages. The story itself is unique and the CGI is top notch and very realistic with accurately depicted dinosaurs (more so than Jurassic Park). As far as realism, it doesn't hold back, which may make it somewhat inappropriate for small children that are scared easily. My 3 year old however, absolutely loves this movie. He likes scary dinosaurs.

While each animal is depicted very naturally, they are voice overed by actual actors. The dinosaurs aren't actually talking with moving lips, but they are depicted as acknowledging to each other when an actor speaks. John Leguizamo plays the narrator, a prehistoric bird that tags along for the adventure and speaks to the audience. He does an excellent job. He's the only character that breaks the fourth wall, but does it in such way that it doesn't distract from the story. The other characters do not seem aware of his presence as both a narrator and a character.

The adventure and plot itself seems natural to the animals behavior and doesn't try to depict the animals as having a high level intelligence that would be unfitting to them. Its like nature show with voice over.

This movie in no way tries to sell itself as a kid's movie and is fun for both adults and children of any age.
3 people found this helpful

Andy H. Cr.Reviewed in the United States on February 20, 2019
4.0 out of 5 stars
Cute movie for dinosaur-loving kids
Verified purchase
Cute movie about a smaller pachyrhinosaurus and his struggles as part of a large herd. Since he is so small for his species, he has to be a little more clever than most. That is not a bad lesson for children to learn. Also, the movie has prehistoric mammals and birds as part of the story, and it is may be useful for children to know that these animals were around for quite a while when dinosaurs were on earth.

The above picture is a styracosaurus
which is closely related to the pachyrhinosaurus dinosaurs that dominate the movie. Also it is possible on the basis of the animal’s facial structure that pachyrhinosauus had a karatinous nose horn, but we don’t know for certain because karatin does not fossilize well. This theory therefore lacks supporting evidence. The pachyrhinosaurs do not have horns in the movie.
7 people found this helpful

Fuzzy DimetrodonReviewed in the United States on August 16, 2020
5.0 out of 5 stars
Its a good movie and all the JP Fanboys are mad that it is
Verified purchase
CRETACEOUS CUT: Before I start I wanna say that with the Blu-Ray version you can watch a version called the Cretaceous Cut. Its basically the same thing as the regular movie but no Voice Actors, humans, or ending credits. It just jumps straight to the film. Although they took out most parts of the voice overs, the music and that one scene with the Gorgosaurus are still there, but that can be overlooked.
If you have a PS4 like I do it comes with a Blu-Ray player so you should have no problem watching.

I genuinely like this movie. The only reason this movie flopped was the title. The original Walking with Dinosaurs was made by BBC and was a documentary style show. This movie is a family film directed towards young audiences that can be fun for the whole family. All the people who left bad reviews are just mad that it isn't like the documentary.

As for the movie itself, it showed dinosaurs in one of the most realistic ideals I have ever since in a movie that was in such high quality. The detail and work that went into bringing these animals to life is phenomenal. The dinosaurs that should have feathers and filaments have them. The animals had great vocalizations that felt natural and not out of place at all.
The landscape of the film was spectacular and perfect for the natural enviornment of these animals in particular; most films and documentaries usually use a more tropical or arid landscape to film and seeing a northern film shot used was a breath of fresh air.
Even though it wasn't a documentary, there are so many snippets and details packed that you can see the ecology, life cycle, and behavior of the pachyrhinosaurs. You saw nesting behavior, herd behavior, dominance and fighting, sexual dimorphism, growth, and even dirt rolling. And if you know a little about fossils in Alaska, you'll know that there is a pit of fossils full of thousands of Pachyrhinosaur bones that were found together. The possible cause of mass death was mass drowning. There are two scenes in this movie that feature water and the dangers it poses to the herd.

Overall, its an amazing movie, probably the best out there in terms of realism and detail. Its almost bittersweet that it flopped, because now you can get a Blu-Ray copy for cheap.
2 people found this helpful

BillReviewed in the United States on August 9, 2021
4.0 out of 5 stars
GOOD 3D w/ Decent Dinos
Verified purchase
It's a bit of a shame that they used the same name as the wonderful old TV series -- it doesn't deserve the association with that titanic entry of dinosaur education and visualization, and anyone hoping for something similar to the series will be deeply disappointed.

The hackneyed Disney-esque narrative and dialog here is largely garbage, but the dinosaur modeling and animation aren't really too bad and there's plenty of visual delight for someone able to accept the blah story as a catalyst for seeing more dinosaurs in 3D.

The 3D here seems to be something of a mix between film of actual locations that's been 3D mapped in post-production (so sometimes it has a cookie-cutter effect), film of actual locations that was shot in 3D, and then -- of course -- CG creatures that are natively 3D. The final result it quite good, with only fleeting artifacts or effects that might distract. As a side-note, I appreciated that pausing the film did not stop the 3D effect (something that I've experienced in other 3D films), so if there's a particularly interesting creature or scene that you want to gaze at, you are perfectly able to do so.

I watched this using the first generation PSVR headset on a PlayStation 4 Pro (as of this writing the PS5 does not support 3D blu-ray), and it was satisfyingly crisp and colorful, with very few moments where there was enough motion to produce blur or ghosting. It was sorta dumb, but for $15 it was perfectly pleasant to get some good dinosaur 3D.

[ EDIT: Something I didn’t realize until after watching it is that there’s an option called “Cretaceous Cut” that lets you watch the whole thing minus the silly human intro and minus all the dino dialogue. I’ll definitely be re-watching it like this, and (although the whole story obviously remains the same) I expect it’ll be somewhat easier to focus purely on the visuals and I’m stoked that it’s an option. ]

Kenneth N.Reviewed in the United States on July 28, 2018
5.0 out of 5 stars
Watch the CRETACEOUS CUT version on Blu-ray for a different experience!
Verified purchase
This film, Walking with Dinosaurs (2013), is a really cool, and funny movie to add to your dinosaur film collection. It features the voice talents of John Leguizamo (who played Sid the Sloth in the Ice Age films) as Alex, the Alexornis, and also Justin Long (who starred in Alvin and the Chipmunks) as Patchi, the Pachyrhinosaurus. This movie set comes with a digital code on paper, and 2 discs (one is Blu-ray 3-D and Blu-ray, and the other is DVD and Digital Copy on disc), and the cover art is very detailed. Overall, buy this film on Blu-ray for the best-possible viewing experience on your HDTV at home!
4 people found this helpful

Regina KillianReviewed in the United States on September 10, 2020
2.0 out of 5 stars
Kids might find this entertaining, but not adults
Verified purchase
I was kind of hoping this would be more like the BBC series - more scientific in nature. This is more of a "fantasy" movie that I'm sure kids would love. But as an adult that found the Walking With Dinosaurs series very informative and fascinating, this movie was a bit of a dud.
One person found this helpful