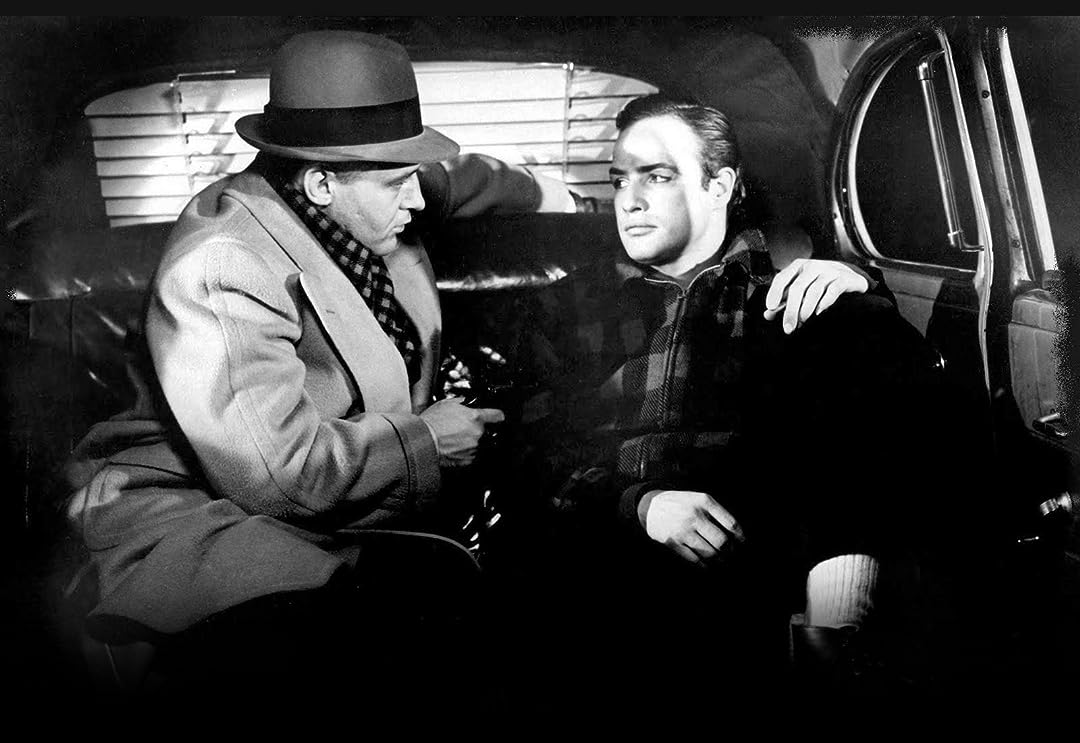 (1,947)
8.11 h 47 min1954X-RayNR
Marlon Brando stars in this hard-hitting drama about an ex-prizefighter who goes up against labor leaders to expose corruption in the ranks.

Cary HReviewed in the United States on February 17, 2018
5.0 out of 5 stars
Debateably Brando's best work. This set has all three aspect ratio ...
Verified purchase
A true classic. Debateably Brando's best work. This set has all three aspect ratio versions for your viewing enjoyment in 4k digital restoration. If I understand correctly Europe's wide screen at the time was 1.85:1, America's was 1.33:1 so the original cut of On the Waterfront was filmed in 1.66:1 to split the difference. They took into account additional cropping or opening would occur in the other formats so they were careful in every scene of picture composition. I love the movie so much I have watched it in all three perspectives. How I was led to this movie is Robert De Niro in Raging Bull quotes a scene from this movie at the end. It was a clever bit of script and directing for Jake La Motta (De Niro) to look back at his life and quote Terry Malloy (Brando) as he was looking back at his life. Both characters as boxers that could have had it all but one bad decision knocked them both from fame and being great.
33 people found this helpful

C. C. BlackReviewed in the United States on July 21, 2018
5.0 out of 5 stars
Simply A Classic, Done Up in Criterion Style
Verified purchase
"On the Waterfront" deserves the Criterion treatment. Its subject matter—day laborers, hungry for back-breaking work, intimidated by organized crime—has certainly not dated. From stars to featured players to bit parts (many played by civilians), the acting is beyond excellent, especially for the early 1950s. This was Brando's encore after his breakthrough in "A Streetcar Named Desire;" to my taste, in "Waterfront" he gives an even richer, more nuanced performance. (Forget the parodies of his style as a Method mumbler: this man knew how to act without a shred of artifice.) Rod Steiger, playing his older, conflicted brother, Karl Malden as the dockside priest who gives the film its moral center, and Lee Cobb as the chief racketeer are uniformly splendid. In her introduction to film, Eva Marie Saint gives a perfect performance that guaranteed her stardom in years to come. Filmed on location in the docks of New Jersey, with a thrilling score by Leonard Bernstein (his only for films), directed by Elia Kazan (arguably his best film), this is a must-see. The second disc is brimming with the Criterion complements that we've come to take for granted but so enrich the film's appreciation: the newspaper story on which Budd Schulberg based his screenplay, perceptive interviews with Kazan and Saint, an incisive analysis of the film's most famous scene by both Rod Steiger (who played it with Brando) and James Lipton ("Inside the Actor's Studio"), an analysis of Bernstein's musical choices by Jon Burlingame, and on and on. There are cheaper version of this film available, but none has been restored and supplemented as lovingly as this. It belongs on your shelf of classics.
22 people found this helpful

John P. SalvaggioReviewed in the United States on April 8, 2017
5.0 out of 5 stars
BUY IT NOW.
Verified purchase
Fantastic classic. I went to "film school" and we watched this several times, it is a very controversial film. I fell in love with it. the case, leaves much to be desired, it is heavy an odd size and nearly all cardboard, I would have preferred a plastic case. It comes with a very informative book featuring interviews. the Video quality is stunning- STUNNING. I used to quality control at a huge hollywood studio and scrutinizing 4k+ video files was a daily affair, as well as I filked things on 5K+ and this does not disappoint, for an older film, it is truly modernized and restored properly. they did a good job. good features.
24 people found this helpful

Terry Malloy is a washed-up former prize fighter during the days when the mob ruled the fight game. Having to take a dive in the ring so his handlers could make a winning spree on the opposing fighter, Terry loses his chance of making it big in the fight game. Now he handles pigeons on rooftops of New York City and on occasion gets work in the harbor, where alias John Friendly runs the crooked union for all ship workers. Terry happens to be the kid brother of Charlie the Gent, John Friendly's book keeper.

When a dock worker named Joey is killed for speaking to the police about the corrupt union leader John Friendly and his cronies, he's killed. His sister visiting from school, Edie, wants to know who killed him and why. A priest, played by Karl Malden, offers help. Their attention turns to Terry Malloy when it's learned he was the last person to see Joey alive.

Edie approaches Terry, who remembers her when she was a kid. A fast friendship develops between them, but Terry will only speak so far about the death of ther brother. "Edie, you gotta be careful," he warns her. "It ain't safe to be asking questions." But Edie persists and soon the police are looking to Terry for help in busting the corrupt union leader John Friendly.

robin friedmanReviewed in the United States on July 26, 2021
5.0 out of 5 stars
Watching "On The Waterfront" On Prime
Verified purchase
I hadn't seen this famous 1954 movie, "On the Waterfront" until tonight, on Amazon Prime. The film is gritty and riviting. The movie tells the story about corruption on the waterfront and in the unions and about the importance of courage and standing up for the truth. Marlon Brando gives a great performance as Terry Malloy, a former boxer who has thrown a fight and winds up a tool for the longshoreman bosses. Karl Malden plays a heroic priest and Lee Cobb plays the sinister boss, Johnny Kelly. Leonard Bernstein wrote his only original film score for the film, and the dramatic character of the music resonates from the opening bars. The film received eight Academy Awards and was among the original group of 25 films selected for preservation by the National Film Registry of the Library of Congress.

For many years, I didn't pay much attention to film. I gradually became interested in noir, boxing, and crime films all of which are in the background to "On The Waterfront". I loved the toughness and character of this movie. It taught me something about American experience and art that I otherwise would have missed. Kudos to Amazon for making this classic available on Prime.

joel wingReviewed in the United States on August 15, 2021
4.0 out of 5 stars
Top performances by Marlon Brando-Karl Malden in this story about union corruption
Verified purchase
Marlon Brando plays a conflicted character in one of his most famous roles. He’s a longshoreman working for the crooked union boss Lee Cobb who ends up questioning what he does. That’s shown right at the start as Brando sets up a man to be murdered by Cobb’s men. The corruption at the docks is the major theme of the film. Cobb and his cronies split up the union dues, they have the dockworkers living in fear, they have sources in the police who tell them everything, etc. Brando of course is convincing with his character. You can see him doubting his role with Cobb as the film progresses. On top of that you have Karl Malden as a priest who stands up to Cobb who is the moral center of On The Waterfront. He gives a great speech about the differences between the working man and the union bosses who are taking all the profits from their work, and how people had to stand up to that injustice.
One person found this helpful

Quiet KnightReviewed in the United States on July 28, 2021
5.0 out of 5 stars
On The Waterfront Quite A Contender On Blu-Ray
Verified purchase
The Criterion Collection released this multi-Academy Award winning(Best Picture and director for Elia Kazan) film from 1954, an absolute cinematic classic, possibly the best film from the 1950's, that stars Marlon Brando(Best Actor winner) as former prizefighter Terry Malloy mixed up with ruthless gangster Johnny Friendly(played by Lee J. Cobb) who controls the longshoreman's union and isn't above murder to get his way. Eva Marie Saint won a best supporting actress Oscar as the sister of a man murdered by the mob, and who becomes involved with Terry. Rod Steiger costars as his brother who is embedded deeper in that mob, though still has loyalty for him, and Karl Malden also costars as the crusading Parish Priest determined to put the gang out of business. Budd Schulberg won an Academy Award for his searing, insightful screenplay, punctuated brilliantly by the haunting, moving and majestic score by Leonard Bernstein, his only cinematic contribution!

A massive 4K upgrade from the 2001 Columbia DVD, porting over those extras but including many new ones including interviews with actors Eva Marie Saint, Thomas Hanley, and director Elia Kazan, who also features in a vintage documentary from 1982, along with featurettes about the film itself, composer Leonard Bernstein, and the real life corruption of that time that inspired the story. Presented on 2-discs, and three aspect ratios(which gets its own featurette), with the second disc showing the film in both 1:85:1 and 1:33:1, with the first disc on 1:66:1. Not to be missed, and holds up beautifully today.

scooterloverReviewed in the United States on January 11, 2021
5.0 out of 5 stars
A heavy-duty, sad, profound story. This is serious stuff, not light entertainment.
Verified purchase
This film is a major achievement; I remember when it was new (I was a kid of about age 11) there was endless commentary on the radio and TV and in the magazines--you never heard the end of it! And it's understandable. A very serious subject at a time when Hollywood was focusing mainly on mindless entertainment--stupidities like Gentlemen Prefer Blondes--remember that nonsense? This was real drama, and the performances by Marlon Brando, Eva Marie Saint (a brand-new actress and already a virtuoso!) plus Carl Marlden and others.) Everybody should see this movie once before dying. Some movies can be enjoyed over and over again; this one should only be seen once--it's too strong for a second viewing. But it's unforgettable.
2 people found this helpful
See all reviews
Back to top
Get to Know Us
Make Money with Us
Amazon Payment Products
Let Us Help You
EnglishChoose a language for shopping. United StatesChoose a country/region for shopping.
© 1996-2021, Amazon.com, Inc. or its affiliates