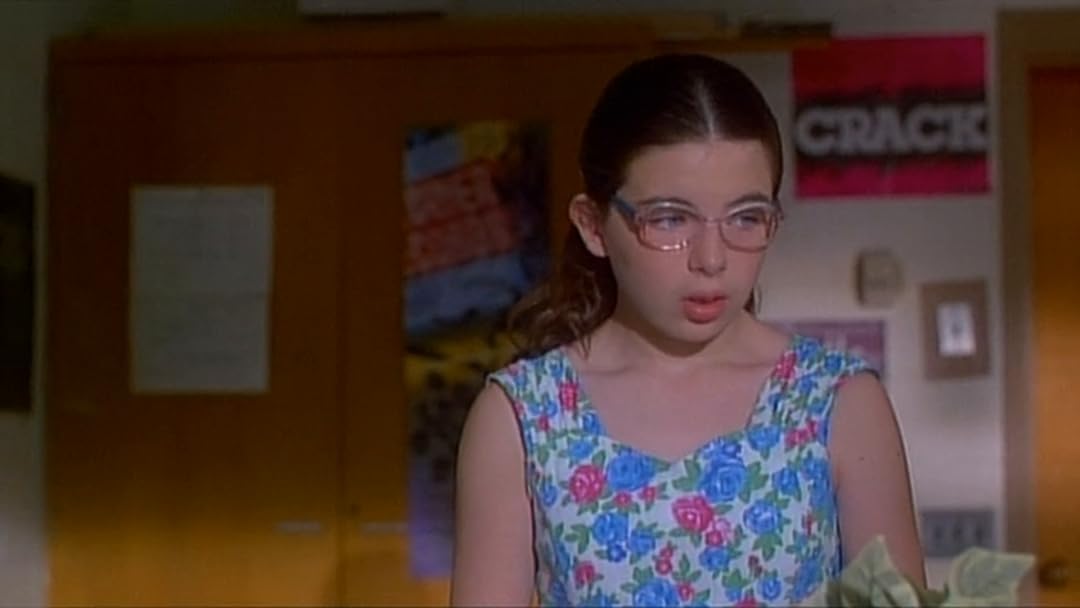 Welcome to the Dollhouse

(1,427)
7.41 h 27 min1996R
Winner of the Grand Jury Prize at the Sundance Film Festival, this acclaimed comedy follows an eleven-year-old geek (Heather Matarazzo) who wants to be popular.

GroovylocksReviewed in the United States on March 14, 2017
5.0 out of 5 stars
Powerful, Pathetic, Infuriating and Absolutely Hilarious
Verified purchase
Quite simply, there are ten movies that ruined all other movies for me. And this is one of them.

You want to save Dawn from a life where not a soul loves her. But at the same time, Solandz forces you to see just how annoying she really is and you find yourself wanting to scream "WHAT THE HELL IS WRONG WITH YOU?" and maybe shake her. It's a really hard film to watch because you're overwhelmed by the conflict between a powerful need to protect the protagonist and a powerful need to steal her lunch money.

Heather Matarazzo was a striking and emerging talent, and a force to be reckoned with, at only 13. She bled angst and stubbornness and, smack in the heart of the most angsty, stubborn decade in human existence (barring, perhaps, some obscure decade during the Dark Ages) It really surprises me that she didn't become a face of the 90s.

ReaderShopperBuyerReviewed in the United States on May 11, 2019
5.0 out of 5 stars
Brutally Honest
Verified purchase
I appreciated the brutal honesty in this movie. The troubled kids act out in ways that you can tell they barely understand. They grasp for acceptance and love, but because they have seen none of it at home, they're not sure how to do it.

The girl who is always ignored and told what to do goes along with things she shouldn't. It has funny scenes but mostly it is a brutally honest movie about kids in very odd circumstances. It isn't preachy or PC, just a darkly funny and sad story of children maneuvering difficult lives.
7 people found this helpful

G_N_RReviewed in the United States on December 1, 2018
2.0 out of 5 stars
Not a comedy
Verified purchase
I do not consider this movie to be a comedy. It's a relentlessly depressing portrayal of an isolated 7th grade girl who is bullied at school and at home. No adult in her life makes even the slightest effort to try to understand her. The one potentially redeeming plot line-a budding friendship with a troubled boy who bullies her at school- is aborted prematurely.
Even the stronger cast members can't rise above the painfully plodding script.
8 people found this helpful

EmReviewed in the United States on October 3, 2016
5.0 out of 5 stars
Dark, offbeat, heartfelt comedy about the hells of suburban middle school
Verified purchase
Offbeat, heartfelt, dark and hilarious with spot-on dialogue, this is a wonderful and freshly original depiction of s***ty life in the suburbs that makes you remember how middle school was actually one of the worst times of your life.

Dawn Wiener is played by a young Heather Matazzaro, who most of us probably know as Anne Hathaway's best friend with the cable show and hot brother from The Princess Diaries. Dawn is an unhappy loner in middle school, where the kids are genuinely cruel, but so are the teachers, families and parents, and even Dawn herself. It seems like everyone in this film is continuously cruel to one another, but not intentionally. Most of the time, it’s in reaction to someone else being cruel to them, which is perhaps true of how cruelty works in real life. Dawn repeats the names people call her at school to her spoiled younger sister Missy. Even Dawn’s bully (and love interest) Brandon McCarthy, is senselessly misogynistic and cruel in the way that only an insecure teenage boy could be. It’s not until we see his father that we get an idea of how he might’ve turned out the way he is.

Most of the film is Dawn getting kicked in the ass by life from all people in every direction, but she (out of bravery, resilience or maybe just stubborn, delusional optimism) keeps getting back up and trying, which makes it worthwhile to watch. This is a film about a bunch of miserable people going through a miserable, shitty time, but Solondz manages to find the wonderful, unexpected humor in the absurdness of it all, while maintaining a heart underneath. At its center, it’s simply about an awkward lonely girl who just wants to be loved (but isn’t.)

Side note: Brandon McCarthy is played by Brendon Sexton III, who four years after Dollhouse, also played Tom Nielson in Boys Don’t Cry (1999), one of the boys who raped and later killed Brandon Teena. After seeing an older, even more frightening image of Sexton as an actual rapist in Boys Don’t Cry, Brandon’s childish rape threats to Dawn, primarily intended to scare her, carry a heavier, eerie quality. As a character, Brandon shares a lot of qualities with Tom that makes us start to see, frighteningly, how a kid like Brandon, who isn’t really a bad kid, could eventually grow up to become someone like Tom, if put in the same circumstances.
9 people found this helpful

Bill & EllieReviewed in the United States on April 16, 2021
5.0 out of 5 stars
"I was fighting back."..... "Who told you to fight back?!"
Verified purchase
This is a must see for anyone looking to hop in a time machine to enjoy some good ol fashioned dark comedy, and maybe get some secondhand embarrassment. It’s cringe-worthy but realistic approach to how a middle school girl feels and navigates life being bullied at a very confusing time. Being from the 90’s it’s important to note that this movie has situations and words used that wouldn’t be socially acceptable in today’s times, and can be offensive. It was funny to us back then, but it would probably would be boycotted today. Anyone who has been a pre-teen or teen in the 90s will truly appreciate this movie’s horrible awesomeness lol...

pandorahReviewed in the United States on February 5, 2021
4.0 out of 5 stars
You'll Love it...If You Have a Sense of Humor
Verified purchase
Omg, this movie is pretty good. (If you're a politically correct person, you'll hate it). Dawn Weiner is an awkward middle schooler during the late 80's, early 90's. Her parents dote on her cuter younger sister, and Dawn is left to her own devices to deal with bullies at school and a crush on her brother's band member. It's a simple story, with some laugh out loud scenes. Worth the watch.
One person found this helpful

Tyler HReviewed in the United States on July 17, 2021
5.0 out of 5 stars
Coming of Age? Get Ready for an Assault on Your Feelings.
Verified purchase
An underrated coming-of-age film, this movies stings. There is a balance of treating the main character with ruthless and relentless cruelty, but somehow maintaining a frightfully believable perspective. Middle school is rough, and so is this film. On the bright side, maybe one of the most comically genuine dances scenes ever.

hydrophilicReviewed in the United States on January 21, 2006
5.0 out of 5 stars
Do you take your humor black?
Verified purchase
Another former (I said FORMER! Did you hear me?) nerd checking in. I just watched this movie last night, and it may very well be my favorite film ever. Sometimes art is truer than fact, and "Dollhouse", while certainly not factual, rings very, very true.

Is this film awful? Yes. Is it cruel? Yes. Is it hopeless? Yes. Is it brilliant and funny and bizarrely resassuring? Yes. Reading the other reviews here, I'm a little worried I'm the meanest person alive, because I thought this movie was incredibly funny. I laughed so hard my stomach hurt. Dawn's suffering, and the suffering she inflicts on others, is completely unacceptable, yet it happens every day. What can you do besides laugh? Crying won't do any good either.

As much as I loved it, "Dollhouse" is definitely not for everyone. Here is a hypothetical question: is there some tiny part of you that finds the thought of a nerdy girl murdering her darling little sister with a hammer funny? No? Then stay far away from this film.

I hestitate to cover the actual details of the plot, first because they've been covered extensively already, and second because I think you should go into this movie cold if at all possible. In fact, stop reading this review and go see the movie immediately.

Still here? Okay. I will say that I sympathized with Dawn's sister, as much as I also sympathized with Dawn's dislike. Solondz is both gentle and merciless with his characters. You aren't protected from anyone's ugly moments, but at the same time, you know that they are doing their best, and you might very well do the same thing in their position.

The film, while almost totally without hope, still manages to be oddly reassuring. You can definitely see why Dawn is an outcast - she wears huge glasses with clothes a thrift shop would turn its nose up at, and has an overbite the size of Alaska. But at the same time, you can see that she's not ugly or worthless, the way adolescents often feel they are (and are often told they are). She just hasn't grown into herself yet.

I also strongly identified how surreal and adrift Dawn's experience was. Her peers are cruel beyond all reason (and yet, it's happening), and the adults don't have the faintest idea what's going on, even when she tries to enlist their help. The movie is completely unpredictable, which adds to the sense of rudderlessness. Dawn more or less takes everything in stride because anything, no matter how good or bad, seems possible. Becoming popular? Rape? DisneyWorld? It doesn't matter that it doesn't make sense, she is still living it.

The ending is awful, but unfortunately very true. That's all I'm going to say. See for yourself!
13 people found this helpful
See all reviews
Back to top
Get to Know Us
Make Money with Us
Amazon Payment Products
Let Us Help You
EnglishChoose a language for shopping. United StatesChoose a country/region for shopping.
© 1996-2021, Amazon.com, Inc. or its affiliates