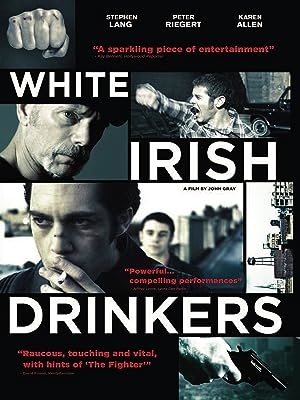 (67)
6.81 h 49 min2011R
Danny concocts a daring scheme to steal enough money for the two to escape, timed around the chaos of an upcoming Rolling Stones concert. Brian, ultimately has a choice: remain loyal to the brother with whom he shares a powerful love-hate bond, or use his hidden talent as an artist as his own ticket out of their dead-end existence.

ZacReviewed in the United States on March 9, 2014
4.0 out of 5 stars
You're a hump.
Verified purchase
I like how a lot of the style and terminology in the movie is derrived from inner-city life and slang. It's pretty much the same as the movie Black Irish in it's storyline, but I'm a fan of anything Irish so I liked this film. It never got big exposure and I'm guessing the budget was too high, but the acting is for the most part believable, and the closure of the film is good. It's difficult not to be biased on film reviews, and I hate giving away any parts of the film, but it's only available on DVD (no Blu Ray) so it's cheap. If you decide to take a chance on it, you won't be spending a whole lot of money.
4 people found this helpful

AGReviewed in the United States on April 4, 2015
2.0 out of 5 stars
) and reworked around the good son/bad son theme
Verified purchase
At the outset of this film I was eager to see how it would play out and perhaps reflect the ethos of mid-1970s Brooklyn Irish-American culture, at least among an element of the folks. While obviously not a documentary film, I was still eager to get a sense of the time and place. By the end of the film, especially where the son refuses his father's goodwill gesture of a farewell handshake, I just gave up. As a graduate of UCLA film school (1980) and as one who has studied and written about Irish and Irish-American film, I wondered how the filmmaker/s could end on such a dreadful note. Not only that, but I had recently viewed "Black Irish" (2008), and I wondered if a plot outline for "White Irish Drinkers" (2010) had been grabbed from an encyclopedia book shelf (or a database?) and reworked around the good son/bad son theme.

Tina S.Reviewed in the United States on July 13, 2011
5.0 out of 5 stars
Great film!
Verified purchase
I've now seen this movie several times. It is inspiring, suspenseful, funny, and the acting is amazing. Stephen Lang deserves an Oscar for his portrayal of an abusive alcoholic father and there are some great performances by up and coming younger actors. This film has one of the better surprise endings I've ever seen and the overall feeling you're left with is one of hope, redemption, and possibility. Definitely take the time to check this one out!
19 people found this helpful

Mickey RyanReviewed in the United States on September 22, 2011
4.0 out of 5 stars
Yup that's Brooklyn not Boston
Verified purchase
Growing up blue-collar Irish-American in the NYC area, I can relate to this film in almost every sense. From the bar scenes to the dreadful moment the 'old man' comes home from Clancy's Pub, this is an Irish story with the American flag draped around it.
The film revolves around two brothers growing up in 1970s Brooklyn. One's a small-time thief while the other is an aspiring artist just trying to spread his wings and fly out of the city for good. Along the way - romance, violence, temptation, and tragedy strike up until the superb and much-talked-about final scene.
Pour yourself a pint of Guinness and enjoy. This very well made and well acted NY drama will hit very close to home for New Yorkers and Irish viewers especially. Slainte!

KTSReviewed in the United States on May 9, 2020
4.0 out of 5 stars
The Script Was Good
Verified purchase
They did a good job with the script on this--not a 5 but it's a 4.

AlexReviewed in the United States on July 18, 2011
5.0 out of 5 stars
This film rivals blockbusters with much larger budgets!
Verified purchase
This film blew me away with it's impeccable filmography and acting. For an independent film with a $600,000 budget I think it does amazingly well as passing for a film with a much higher budget, and much more seasoned actors.

Avatar's Stephen Lang leads a cast of amazing actors who wonderfully create joy, laughter, suspense and even tears. Some of this is attributed to John Gray, as his talent can be seen in CBS's Ghost Whisperer with Jennifer Love Hewitt.

This is a riveting film and definitely one of my top tens. I agree wholeheartedly with the guy who said it is made stronger by the ending.

I didn't grow up in 1970's Brooklyn but I relate to this film just because some of the settings take you back to a different time and give you a feeling of nostalgia that we can all appreciate. For instance, the notion of it being ridiculous to want to work with computers.

JtellReviewed in the United States on July 13, 2021
5.0 out of 5 stars
Gen X
Verified purchase
Coming of age

john m lyonsReviewed in the United States on March 14, 2016
5.0 out of 5 stars
Five Stars
Verified purchase
great stuff
One person found this helpful
See all reviews
Back to top
Get to Know Us
Make Money with Us
Amazon Payment Products
Let Us Help You
EnglishChoose a language for shopping. United StatesChoose a country/region for shopping.
© 1996-2021, Amazon.com, Inc. or its affiliates