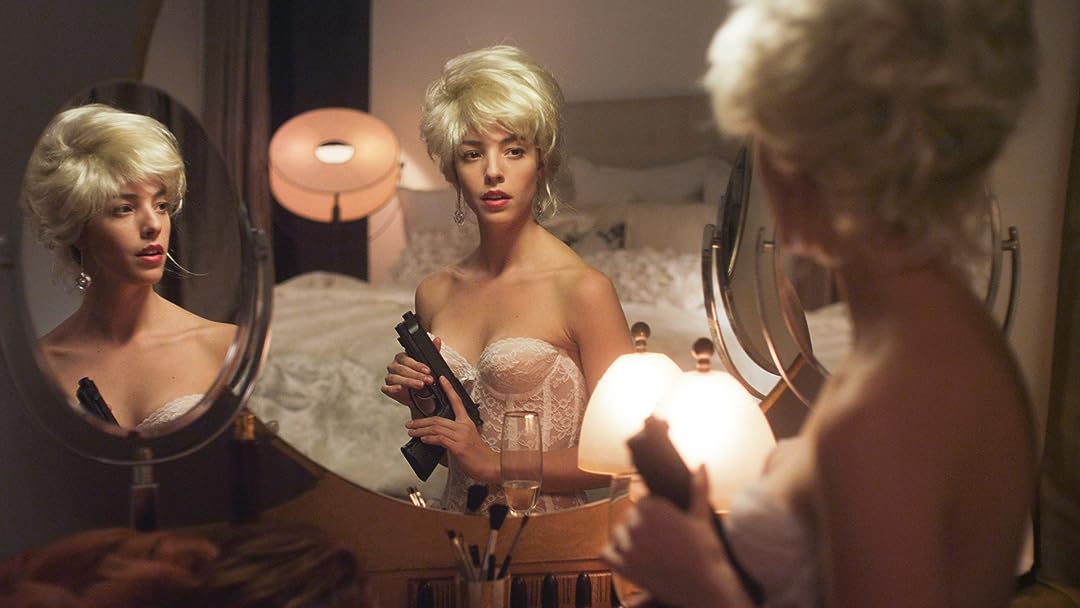 (198)
1 h 28 min2018X-Ray18+
A shy Social Services investigator is reluctantly assigned to an unsolved, small-town homicide case. Taking both personal and professional chances, she slowly assumes the identity of the enigmatic blond victim - known only as "The White Orchid" - in hopes of solving the mysterious murder.

Tillela Reviewed in the United States on December 7, 2020
1.0 out of 5 stars
Split personality
Verified purchase
So many holes, I'd call this film "Cheesecloth". Incredibly sophomoric directing admits dozens of incomplete subplots, characters, and complexities, then skips over the details, in hopes of creating the façade of suspense, rather than inviting the viewer to be part of what could've been smart, incremental development that builds it own suspense. I almost stopped watching, pushed through to the stupid ending. I wish I'd stopped watching. The ending is one last, pathetic, attempt at the twisty irony of becoming a fully sexual being, while eradicating the need to find justice, for a brutally murdered victim.
19 people found this helpful

Tender VigilanteReviewed in the United States on December 14, 2020
1.0 out of 5 stars
Just...just awful.
Verified purchase
Ridiculous. A major plot point was simply invented out of thin air with absolutely no indication of how the script got there. Like trying to tie your shoe to the random stranger sitting next to you. I agree with the reviewer who thought the attempt at film noir was just silly. The actress was not quite believable, the wigs were cheap, and the wealthy mid-century decor would have been more believable without the dingy Mr. Coffee pot on the counter of the upscale kitchen.

The lesbian scenes were just... painful to watch making this movie more of an excuse to be sexy for men, not actual lesbians. But I suppose it did lend itself a smidge to character development. Really blazing fast character development. Claire starts out as a repressed, serious investigator and within a week becomes an unprofessional femme fetale whose loyalties are questionable.

The choice of music, close-ups on lipgloss application and walking in stiletto heels are worthy of eye rolling.

The ending was so... pointless. It made little sense but by the time it was excruciatingly explained I lost interest.

Jennifer Beals never ages so at least that was comforting.

OKHorseRescuerReviewed in the United States on December 9, 2018
2.0 out of 5 stars
Hated everything about this movie...until the end
Verified purchase
I almost gave this movie one star because I gritted my teeth through the whole thing. The director tried WAAAAAAY too hard to resurrect a film noir vibe with an edgy lesbian twist. The heroine was inexplicably fascinated by the protagonist, taking stupid risks and making ridiculous, unrealistic decisions that an educated, savvy investigative journalist would not make. The twist at the end made some of the decisions a little more palatable, but not much. Just enough to make it not one star.
19 people found this helpful

Amazon CustomerReviewed in the United States on October 31, 2020
1.0 out of 5 stars
Pass
Verified purchase
I was lost in the ridiculousness of the main character... wearing a strange dead women's underwear and lipstick was just the beginning. The movie moved so slow the thrill was lost. Its extremely boring and they knew it was boring so they threw in a quick lesbian scene in an attempt to spice it up. Too little too late. I think we were supposed to know who the killer was at the end but I'm not sure because I stopped paying attention. I don't think the acting was bad, they were just doing what was asked of them.
11 people found this helpful

Original Toe KneeReviewed in the United States on December 24, 2020
5.0 out of 5 stars
Possibly a masterpiece.
Verified purchase
A modern Film Noir edgy thriller... keeps you guessing right to the end, and leaves you unsure... what REALLY happened? I loved this movie, but I UNDERSTAND THE LOW REVIEWS as well, the lead character is SO understated and plays her role dry with lots of subtle undertones... the eerie music and seductive mirror sequences have you wondering about just about everything... so... well,unless you are up for a slow paced puzzle that intrigue; you my want to skip this... but if you enjoy a movie you cannot solve, will keep you guessing just out of reach while it slithers around your psyche ... this one is for you.
8 people found this helpful

Forest NymphReviewed in the United States on November 4, 2021
1.0 out of 5 stars
Made for TV in the Worst Possible Way
Verified purchase
Yikes! the film making quality is so incredibly poor that everything looks like a bad 1980s Lifetime Television for Women train wreck. There is nothing legitimately noir abut The White Orchid.

First of all, aside from the large picture windows, the house itself looks like some boring run-of-the-mill LA beach vacation rental, it's decorated like a mid-priced corporate chain hotel, and it's filled with nothing more exciting than two drawers full of outfits and sex toys that would typically belong to the average webcam girl. Yet this "expensive impressive house" is right next door...to a trailer park? The director doesn't think for one second to show whether or not the protagonist is actually locking the door when she enters the murder house, and for someone so mousy and naive she does not seem appropriately frightened by a person menacingly laughing on the answering machine and pulling up into the driveway of the murder house, not once but twice. Any person who wasn't completely out of their mind would suspect that car might belong to the murderer(s) or be tied to them in some way, perhaps via a drug cartel....since there's a huge suitcase of money with a gun!

That's another thing, it's pretty much a federal crime to hide guns and thousands of dollars found in the process of a murder investigation, even if its for social services and not the police. Not to mention her utter irresponsibility in being the cause of the poor, elderly blind lady having a break-in from some man (again, presumably the murderer) because of her.

This woman is not "a good girl." At best she's a completely out of it, sheltered dork, and at worst she's what people in the psych professions call a "covert narcissist." Little miss mouse apparently doesn't have the morals or maturity one would find desirable in an investigator for social services who snoops through dead people's personal items alone on their property. Increasing disgust with the adolescent nature of her boring late blooming among her selfish, dangerous behavior, hidden under a plain jane facade was a big reason I turned this off about halfway through. Protagonist is not a sympathetic character unless you're 13 years old, or perhaps if you too are a covert narcissist.

But wait! That's not all! I watch lots of films that have intriguing stories or brilliant cinematography and settings that have unsympathetic main characters. That's how bad bad bad the plot is - first of all, you don't ask some guy you barely know to watch a murder victim's suitcase full of money with a casual "don't open it" (as if your neighbor would be like oh sure I will watch this mysterious suitcase for you and HIDE IT and NOT LOOK IN IT because I am also a complete goober). Did someone in high school write this screenplay? I want to know. But not badly enough to finish the film.
3 people found this helpful

Roger ByrdReviewed in the United States on October 21, 2021
3.0 out of 5 stars
OK but could have used a rewrite
Verified purchase
If this were a book manuscript, my verdict would be "revise and resubmit." Other reviewers here are dead on target about this film trying far too hard to be a Hitchcockian noir thriller. There is also the problem that soft porn-ish titillation (Olivia Thirlby wandering about in lingerie endlessly) is consistently favored over plot and character development. It's just involving enough that you might not notice the inconsistencies and clumsy plotting and lazy writing, right up until the gimmicky ending, a supposed plot twist that most viewers will see coming for miles. I wish the writers had spent more time; with a little more effort, they could have made this thing crackle. As it was, it was just OK.
3 people found this helpful

Chris GronauReviewed in the United States on January 21, 2019
5.0 out of 5 stars
Don't cry because it's over. Smile because it happened.
Verified purchase
I wasn't sure whether to give this movie 4 stars or 5. If I could have given it 4.5 stars, I would have. In the end, I rounded up to 5. This movie is definitely an Art House movie. If you like art house movies, it's worth watching. If you don't, you should probably give it a pass.

The story follows a mousy social worker, played by Olivia Thirlby, who specializes in identifying dead people. She is tasked with identifying the victim in an infamous murder case where, after months of investigating, the police only know that the victim was renting a remote house under an assumed name using fake ID. No one knows who she really was. Thirlby slowly starts to live the victim's life, and things get interesting.

The acting is good, carried by Thirlby. She is quite good as both the mousy social working and, as she starts to live the victim's life, the more adventurous White Orchid. The ending might have been telegraphed a bit, but was still fun. All in all, I would recommend it if you like art house mysteries.
13 people found this helpful
See all reviews
Back to top
Get to Know Us
Make Money with Us
Amazon Payment Products
Let Us Help You
EnglishChoose a language for shopping. United StatesChoose a country/region for shopping.
© 1996-2022, Amazon.com, Inc. or its affiliates