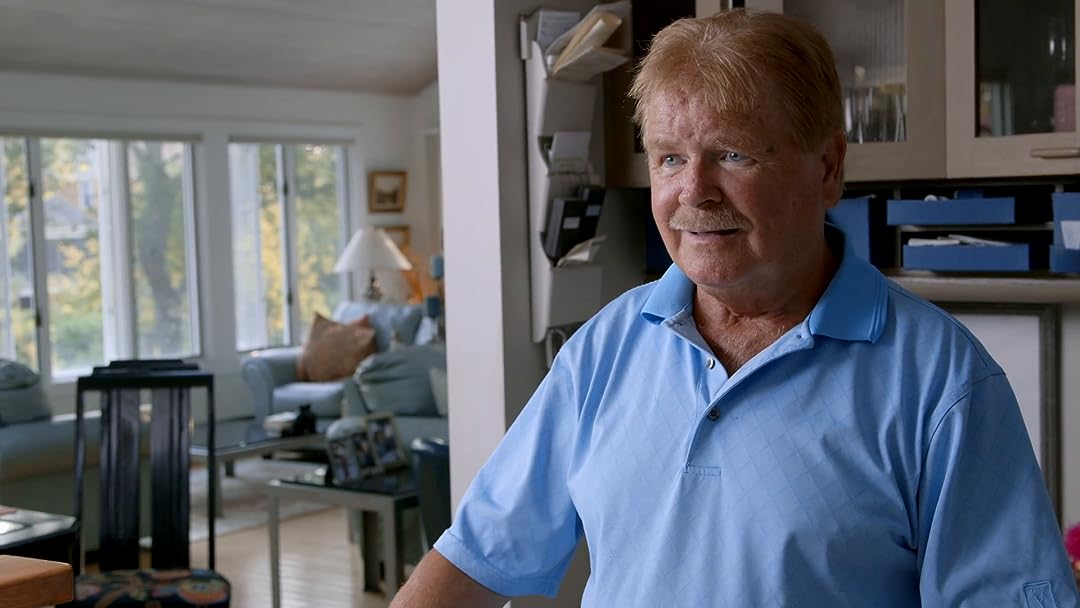 (405)
6.81 h 47 min2014R
The true story of Whitey Bulger, inspiration for Jack Nicolson's character in Martin Scorsese's THE DEPARTED. Acclaimed documentarian Joe Berlinger lays bare the real story of the South Boston crime boss, including his sensational trial. Key players on every side reveal Bulger's influence on crime and law enforcement.

robin friedmanReviewed in the United States on August 24, 2021
4.0 out of 5 stars
A Documentary About Whitey Bulger
Verified purchase
Americans have a fascination with gangsters, and with none more so in recent years than James "Whitey" Bulger (1929 -- 2018). For over thirty years, Bulger was the leader of a violent crime ring in South Boston. Late in 1994, he fled Boston to avoid capture and remained on the loose until captured in California in 2011. In a large 2013 trial in Boston, Bulger was convicted of 31 counts of racketeering and sentenced to two life terms. He was murdered gangland style in prison in 2018.

I had seen two earlier films based loosely on Bulger's life. Martin Scorese's 2006 film "The Departed" received the Academy Award for Best Picture and stars Jack Nicholson playing the Whitey Bulger character in a story of two young policemen on opposite sides of the law. Directed by John Cooper and starring Johnny Depp as Bulger, "Black Mass" (2015) offers a chilling portrayal of Bulger and his many crimes.

I hadn't known anything about Bulger and learned from both these films. I took the opportunity to watch a third film about him, "Whitey: United States of America v. James J. Bulger" (2014) which, unlike the other two movies, is a documentary based upon Bulger's 2013 trial. While showing and discussing many of Bulger's crimes, the film centers upon Bulger's relationship with the FBI. Bulger had worked with an FBI agent as an informant to provide information about the Boston Mafia, a rival criminal gang. The agent soon proved to be crooked and within Bulger's ambit. At his trial, Bulger denied he had been an FBI informant. His denial is explored in the film with the suggestion that much of law enforcemnt had been corrupt for many years letting Bulger have his way.

The lengthy film tells a complex story in a complex way. The tone is melodramatic and wandering and the film is difficult to follow. Still the film is properly troubling to watch and informative. There is no footage of the trial itself (cameras were not allowed in the courtroom) but the film offers excellent footage of the events surrounding the trial. It features interviews with many characters, including defense attorneys, withnesses against Bulger, and many of his violent comrades who turned state's evidence. A group of three Feds comment periodically on the allegations of broad corruption made by the other characters. The film was show onsite in Boston with many scenes of the places where Bulger and his gang flourished.

I found it troubling to see broad criminality of this extent in contemporary urban America, and this film, and the two other Bulger films opened my eyes to its scope. There is a certain vicarious response in seeing evil in action. Bulger will undoubtedly be the subject of other movies and studies in the coming years.

John WernerReviewed in the United States on October 18, 2021
5.0 out of 5 stars
The One Film About Bulger To See
Verified purchase
This film goes a long way in illuminating how Bulger ran his South Boston criminal enterprise for more than twenty years and escaped being caught for another almost twenty years. Bulger had a "sweetheart deal" with the area FBI which was fully in bed with the US Justice Dept. of that region. The top two key players were the local FBI head (Jeremy something) and the agent in charge of Bulger John Connelly. Of course it went further as Bulger had more FBI as well as local law enforcement held at bay. I think the film shows this although Connelly was the only one to be convicted. That said this allowed Bulger a special "free reign" to conduct all of his criminal activities which included liberal murdering. Bulger was never arrested for one thing during the time of a lengthy career of murder and mayhem. When his top man Fleming was arrested and turned evidence FBI agent Connelly tipped off Bulger who would have been arrested instead running and staying on the lam for almost two decades.

This film gives a portrait of a man, Bulger, who was for a very long time untouchable thus giving him freedom to extort and kill at will. And he did so without any remorse. In fact the only thing he cares about, save a girlfriend, was that he never ratted on anyone. He was a psychopath without a conscience in bed with who knows how many in the tiers of law enforcement that should have put him away in the seventies if not before. You've heard it many times: fact is stranger than fiction. Perhaps that he was ever caught and convicted is a bit surreal as it exposed so much possible corruption in law enforcement that somehow was made to go away save for John Connely's conviction. Of all the news media and movies related to Whitey Bulger this film gets my vote as the clearest picture brought forward of the deadly acts and corruption involved.
One person found this helpful

Amazon CustomerReviewed in the United States on August 31, 2021
5.0 out of 5 stars
Exceptional and Revealing!
Verified purchase
This film is outstanding! It delves into how deep the corruption was and is in the F.B.I. and the Justice Department in Massachusetts and adds another piece to the puzzle to how corrupt the entire F.B.I., the Department of Justice and other Government rackets are. I watched what happened when the F.B.I. went after Trump and all the innocent people like Mike Flynn, George Papadopoulos and others who suffered because of it. In both cases and others I'm sure, there has been no accountability and there can be no true justice until there is.
2 people found this helpful

neognomicReviewed in the United States on November 16, 2021
1.0 out of 5 stars
Bulger Whitewash
Verified purchase
Entire movie made to whitewash the crimes of the psychopath Whitey Bulger and convince the viewer that he was not an FBI informant, while criminalizing the actions of the US Justice Department.
Not what was expected. I expected it to change and stayed with it for well over an hour but they kept up the same whitewash.
The amazing thing is how they let Bulger talk and how they expect people to believe a pure sociopath and the defense attorneys being paid to lie for him. There were so many liars from the criminals and the government, too, being given time to speak it made my head hurt.

Not recommended ...unless you need practice picking-out liars 'cause there are plenty to observe in this.

Original Toe KneeReviewed in the United States on March 15, 2020
5.0 out of 5 stars
the inside story?
Verified purchase
A compelling overview that indicates unimaginable corruption across the board. The inside story lurks in the dark, portions revealed to appease a news story, but we will never knowhow deep it goes.... Humans just aren't angels, unless they are dead, so it seems...the ones who really knew too much... dead.... the ones who covered it up, mostly protected and will never be revealed... meanwhile all those who BENEFITTED from turning a blind eye... I wonder what they think, if they ever watch a documentary such as this then laugh, or do they shudder... and are there a few who ever become better people after they get away? Food for thought... Bulger is no saint...but they knew him, he is their cover story.... human nature or will there ever be actual honesty in power? good question.
One person found this helpful

paulReviewed in the United States on September 6, 2021
4.0 out of 5 stars
Conspiracy theories aside just follow the money
Verified purchase
At the end of the day the NE mafia FBI and Hoover were so obsessed with were decimated while Irish mobster Whitey reigned supreme and untouched over that area for over 20 yrs. It's not rocket science follow the money or leaks/information which allowed FBI to wipe out the NE mafia while Bulger ruled over that area in their absence

Whitey was killed in prison by 2 men. Prison officials believe one of the 2 men an Italian mob hitman from Boston Fotios Geas serving a life sentence for a murder reportedly related to organized crime. Geas, a native of Boston, is a suspected "Mob hitman" who has always been vocal in his criticism of police informants. Just follow the money

JDubReviewed in the United States on August 30, 2021
5.0 out of 5 stars
"Power doesnt corrupt people, people corrupt power."
Verified purchase
An exceptional look into a cautionary tale of a how multiple government entities created to protect the people are manipulated and reduced by thugs and lowlifes to entities hellbent on protecting themselves from the people, by any means necessary.

Keep your mouth shut. Get in line. Stay in line. Mind your business.
One person found this helpful

A semi-fictionalized story about Whitey is about to come out with Johnny Depp in the role of this Boston Irish mob boss. Catch this documentary before a “docu-drama” further confuses you on the facts!
I knew the very rudimentary basics of the Whitey story: that the US had convicted Bolger of involvement in multiple murders in the Boston area and sent him away for life to a Federal penitentiary, but not before he went free for many decades (much of which he spent under another identity in California). Beyond that I did not know much.
I don’t know how this filmmaker got so much access to some of the witnesses to the case to film their thoughts both before and after the trial. On the rear jacket, “using the courtroom action as a springboard” is misleading. No cameras were allowed in the courtroom nor was there any attempted “reconstruction” of courtroom drama, only real peoples’ comments about what went on in court.
Although 1 or 2 US officials were also convicted of crimes, the documentary makes a rather convincing case that more than 1 or 2 law enforcement officials were corrupt and complicit. One or two dozen would probably be closer to the truth. Worth watching
See all reviews
Back to top
Get to Know Us
Make Money with Us
Amazon Payment Products
Let Us Help You
EnglishChoose a language for shopping. United StatesChoose a country/region for shopping.
© 1996-2021, Amazon.com, Inc. or its affiliates