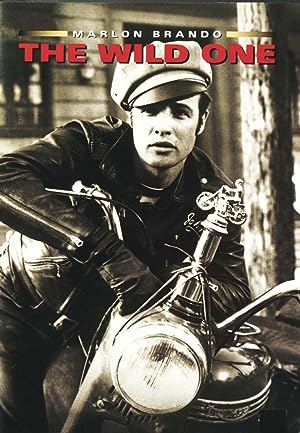 G. CepedaReviewed in the United States on December 8, 2020
4.0 out of 5 stars
The movie that established the Brando Style of "Cool"
Verified purchase
To this day, men still emulate the look of Marlon Brando's Johnny from "The Wild One." Heck, the late John Belushi emulated the Wild One's look and wore a costume like Brando's in at least 2 sketches on SNL (circa 1976/1977). Nearly 70 after "The Wild One" was released, men still try to capture the essence of whatever cool Brando had in that movie by copying his look!
The Plotline:
Johnny may be a rebel and a troubled young man but he has a magnetism that attracts women and conflict to him.
This film didn't have much budget; it's not full of special effects and explosions. There's (thankfully!) not much rear-screen projection for the motorcycle scenes. The strength lies in the performances of the leads and the rest of the cast. Besides being a Brando vehicle, the movie features one of the earliest if not THE FIRST appearance of Lee Marvin. Marvin is suitably menacing in the film and the TRUE terror any small town should fear.
It's a story of rival gangs with no real direction fighting over scraps in what looks like the middle of Nowhere, America.
A local girl becomes attracted to Johnny and there may or may not be anything happening between them until a rival motor gang leader who was an ex-member of Johnny's cycle club arrives to create trouble. From there, it becomes a clash between the small town order and 2 cycle gangs that don't respect traditional rules or cops.
It's a real basic film but the Brando character and lead actress draw you into the story. For a while, Johnny makes you wonder if his character is a real sociopath, if he has any redeeming value.
The Blu ray release is very basic. It has a menu and that's about it for extras. No trailer. Picture and audio quality are probably about the best they can be for this film and it's the best quality release of this movie on home video to date.
For a budget home video release, it's a no-brainer. Buy it if you like motorcycle movies, old Hollywood, Marlon Brando, and a 1950s movie that doesn't live up to the conformal stereotypes of that decade.
I think this is absolutely one of three Brando movies any movie afficionado should have. The other two are On The Waterfront and The Godfather.

Bill StaleyReviewed in the United States on October 21, 2018
1.0 out of 5 stars
The movie was awful and it's not worth watching to see the bikes
Verified purchase
I wanted to watch if for the 50's motorcycles. But that was disappointing. The makers of the movie viewed the bikes like dancers in a big choreographed dance. The did not love the bikes, and it shows. The plot and acting are horrible. You pretty much hate everybody. I could not finish watching it. I just fast forwarded to see the motorcycles. I do not recommend it to anyone.
6 people found this helpful

William B PayneReviewed in the United States on September 3, 2021
1.0 out of 5 stars
Woefully dated
Verified purchase
The movie starts like "Reefer Madness" and quickly goes downhill. It's obvious that everyone involved was trying to cash in on Brando's physicality and mystique, but had no clue how to do so. From his clownish hat to his general demeanor, he looks lost, with none of the smoldering intensity of "Streetcar" or "On the Waterfront".
The movie isn't even worth watching for unintentional humor. It just sucks.

Quiet KnightReviewed in the United States on July 25, 2021
3.0 out of 5 stars
The Wild One Rode Onto Blu-ray
Verified purchase
Mill Creek Entertainment released this influential 1953 Columbia Pictures Biker film starring Marlon Brando onto Blu-ray, making a decent enough HD upgrade from the old DVD, though like that disc, this is also a barebones affair; a pity a greater effort wasn't put into this, though the presence of future star Brando is the best thing about it overall.

J. C.Reviewed in the United States on August 19, 2015
5.0 out of 5 stars
Old enough to remember this, still enjoy it.
Verified purchase
Brando and Marvin are outstanding in this early in their careers film. Disaffected youth, as in alot of our generations, this is an attempt to dramatize the actual taking over of a small Northern Cal. town by an outlaw biker gang in the early 50's or thereabouts. Hollister, Cal. I believe. While I've enjoyed this movie since it first came out, then heard nothing about it until a recent resurgence do to perhaps Brando's passing or reality outlaw biker tv shows. As far as acting, I still enjoy it. Sadly, in reality, those types of lost [obviously non-Christian, godless] individuals are no role model for our youth of today. Brando and Marvin archive material worth keeping, however.
4 people found this helpful

BequetteReviewed in the United States on November 16, 2018
4.0 out of 5 stars
Iconic!
Verified purchase
This movie feels like every biker movie I have seen, but it was the one that set the standard! Moment after moment and shot after shot became iconic. A must watch if for no other reason than it may have contributed to how the Beatles got their name.
2 people found this helpful

Paul HeffronReviewed in the United States on March 8, 2011
5.0 out of 5 stars
Live To Ride
Verified purchase
This cult classic from 1953 still holds up very well on several levels. It can be viewed by people like me who love to ride motorcycles and enjoy seeing that "inner rebel" on the screen that we sometimes find within ourselves and are drawn to, or it can be viewed from the standpoint of a study of peer pressure and mob psychology.
This movie brings me back to my teen years when I first saw it on tv in 1966. Three months later I rode on a motorcycle for the first time.I've been riding a lot more in recent times and still think back very fondly to this film that is more effective in black and white than I think it would be in color. Perhaps it makes all that black leather stand out more.
Marlon Brando gives a very strong performance as Johnny by bringing out the contrasting personality traits of a man who wants to be tough but is also very vulnerable and sensitive in ways he doesn't know how to handle. This inner conflict is brought out by Kathie, well played by Mary Murphy.
All of the minor charactors are also well played and natural looking, especially the police and town officials. One can see where Lee Marvin as Chino would be sought after for many more acting jobs after his fine work in this film.
If you are a wanna be biker or have the boots, leather jacket, but no bike, watch this movie and maybe your dream of being able to "LIve to ride" will eventually come true as it has for me. I may not have become a biker at all if I hadn't seen this movie.
9 people found this helpful

Robert KronenwetterReviewed in the United States on November 16, 2020
5.0 out of 5 stars
Definitely a cult following movie for motorcycle fans of all ages.
Verified purchase
Good old fashion motorcycles and period correct clothing show what the sport started like. Brings back many memories. Better quality in Blu-Ray than original.
One person found this helpful
See all reviews
Back to top
Get to Know Us
Make Money with Us
Amazon Payment Products
Let Us Help You
EnglishChoose a language for shopping. United StatesChoose a country/region for shopping.
© 1996-2022, Amazon.com, Inc. or its affiliates