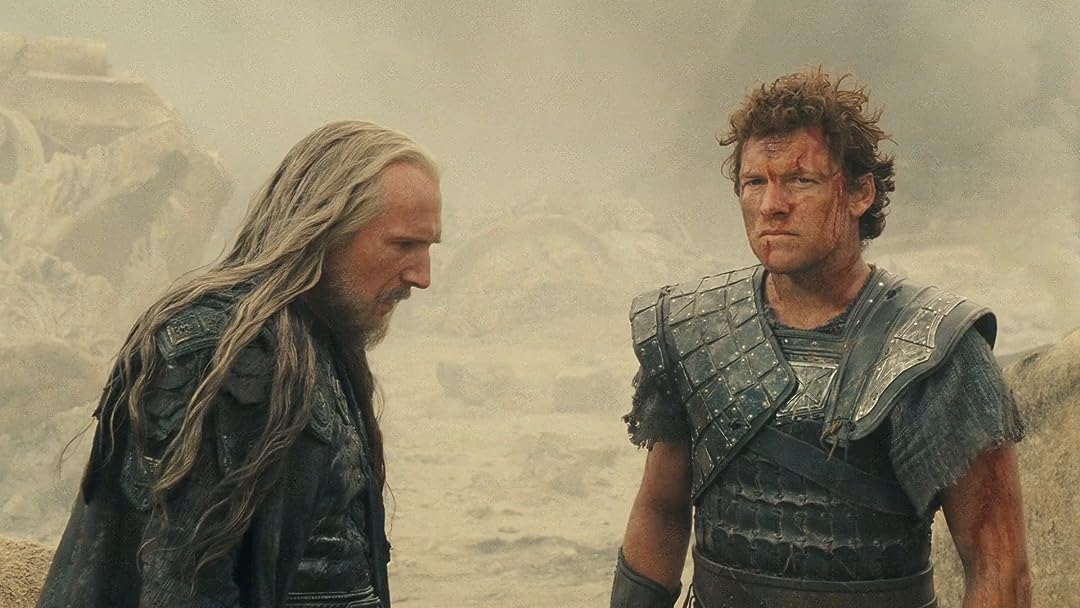 Wrath of the Titans

(7,861)
1 h 39 min2012X-RayPG-13
When the gods are in danger of being overthrown by the Titans, Perseus embarks on a treacherous quest into the Underworld to rescue Zeus, overthrow the Titans and save mankind.

joel wingReviewed in the United States on June 10, 2019
4.0 out of 5 stars
Fun follow up while offering nothing new
Verified purchase
Wrath of the Titans was the follow up to the Clash of the Titans. It featured many of the same characters including Sam Worthington as Perseus, Liam Neeson as Zeus, Ralph Fiennes as Hades, and Danny Huston as Poseidon, while introducing new ones such as Rosamund Pike as Andromeda, Edgar Ramirez as Ares, Bill Nighy as Hephaestus, Toby Kebbell as Agenor, and John Bell as Helios. The movie is about Perseus trying to save the gods from human stopping worshipping them which unleashes all kinds of evil upon the world.

The story follows the same basic path as the first movie but with more action. For example Perseus gets together a group of warriors and goes on a quest. This time what he runs into are bigger and better like a family of cyclops and a labyrinth. While this is fun there’s nothing especially original. The ending battle is much bigger than that in Clash of the Titans, but it’s the same basic idea as the first with Perseus going up against a giant monster.

Despite the limitations the movie is still a good watch.
C

melissa cockrellReviewed in the United States on September 7, 2019
5.0 out of 5 stars
Great example of the darkness the Lord Jesus delivered us from!
Verified purchase
This is a good example of how the minds of people see things and how the Lord Jesus set us free from a maze of confusion and at times madness, case considered. The special effects were great too. You can see how lost mankind was and is apart from the Lord by these types of examples, and that there’s no hope without Him. Praise God! Victory in Jesus!
7 people found this helpful

jonathanUSMCReviewed in the United States on June 28, 2019
5.0 out of 5 stars
Better than the first
Verified purchase
The first had way more 'cringe' moments, although I still loved it. The second I love even more because there was much less cringe, and it's truly unpredictable where the plot is going. IMBD should have given it a 6.4, not a 5.8.
I've always loved Greek mythology, but this movie took it to the next level. Worth the rent if you have interest in this area.
5 people found this helpful

414sfinestReviewed in the United States on August 22, 2020
5.0 out of 5 stars
Awesomeness!!!
Verified purchase
Ordered for movie night with the kids as I’ve seen this movie before but wanted to share the awesomeness with the kids. How awesomeness you ask!? For one it has Ralph Fiennes (Lord freaking Voldemort himself!) and two, Mr. freaking TAKEN himself Liam Neeson! AND the great Bill Nighy! Doesn’t even matter what the movie is about at this point. 3 awesome actors in one movie equals awesomeness anyway you look at it.
2 people found this helpful

C. JackReviewed in the United States on March 14, 2017
3.0 out of 5 stars
Ah...who said this one was better than the first? No way...
Verified purchase
First...I'm not sure why anyone would say this was better than the first. It clearly isn't. The Hades character remains interesting, and there wasn't much further development of the Perseus character. Ditto for the Zeus character. The major villain must have been up for fodder, as Kronos appeared in both this and the Percy Jackson movie, almost looking the same too. The monsters lacked the appeal of the Kracken. And there was much less character development in this one than that last. So it was only OK.

D. RodriguesReviewed in the United States on December 18, 2012
5.0 out of 5 stars
Ghost of Steve Reeves
Verified purchase
To be honest, I was not expecting much given the many lukewarm reviews but the lush visuals and amazing actions sequences more then make up for this films weaknesses. If only the chemistry and character development between Perseus and Andromeda had been developed somewhat it would have really soared. Despite the flaws, if you have any interest in ancient mythology it's always fun to see how top notch special effects wizards bring these myths to life. In that regard, it was a joy to see a family of raging yet reasonable cyclops, Pegasus in action, Pegasus with a personality and a great cameo shot of Ray Harryhausen's wonderful mechanical owl Bubo, sweet. The labyrinth scene was awesome and of course if you have a maze you are going to get a Minotaur. I thought for a minute we might get to see Theseus show up and lend Perseus a hand but that didn't happen. If they make another one in this series in the future - maybe they can do some special effects magic to bring back Steve Reeve's Hercules for a cameo too. Again, despite all the mixing of myths and flat acting on the part of some characters, the movie was a blast to watch and Cronus was indeed one scary dad.
One person found this helpful

HitchReviewed in the United States on December 15, 2013
4.0 out of 5 stars
Not great but still good
Verified purchase
I know many people are trashing this film, and I admit it's not the greatest, but it is definitely better than it's predecessor. I actually consider this film to be an unoffical sequel to the 80's "Clash".

Now again, don't let me get anyone thinking this movie is going to blow you out of the water, but just contrasting it with the first film: In the first, Perseus was a whiny little baby, didn't want to be a hero, complaining the whole time, atleast here he's just like "OK, I'm a demi-god, let's do this thing". I thought Cronos was really cool, fans of "Age of Mythology" should like him, Rosamund Pike certainly wasn't hard on the eyes and she fits the Greek beauty perfectly.

All in all, this was a fun film and huge improvement over the last one, I know it didn't do well in the theatre, but I think if you liked the 80's film this is a pretty cool modern continuation, and atleast in the this film they gave a respectful nod to Bubo instead of insulting that much beloved character as they did before.
2 people found this helpful

Carol LReviewed in the United States on July 27, 2018
1.0 out of 5 stars
WARNING: Pirated Movie
Verified purchase
The movie is great, the 1 star is because evidently, Amazon has pirated this movie!!! I was about 20 minutes into the movie, when a notice came on, and the sound went off. Evidently, Cinevia has the rights to the movie and this version was NOT authorized!!! So now, I have a movie I can't play! (well, I CAN play it, but I can't HEAR it!)
4 people found this helpful
See all reviews
Back to top
Get to Know Us
Make Money with Us
Amazon Payment Products
Let Us Help You
EnglishChoose a language for shopping. United StatesChoose a country/region for shopping.
© 1996-2022, Amazon.com, Inc. or its affiliates