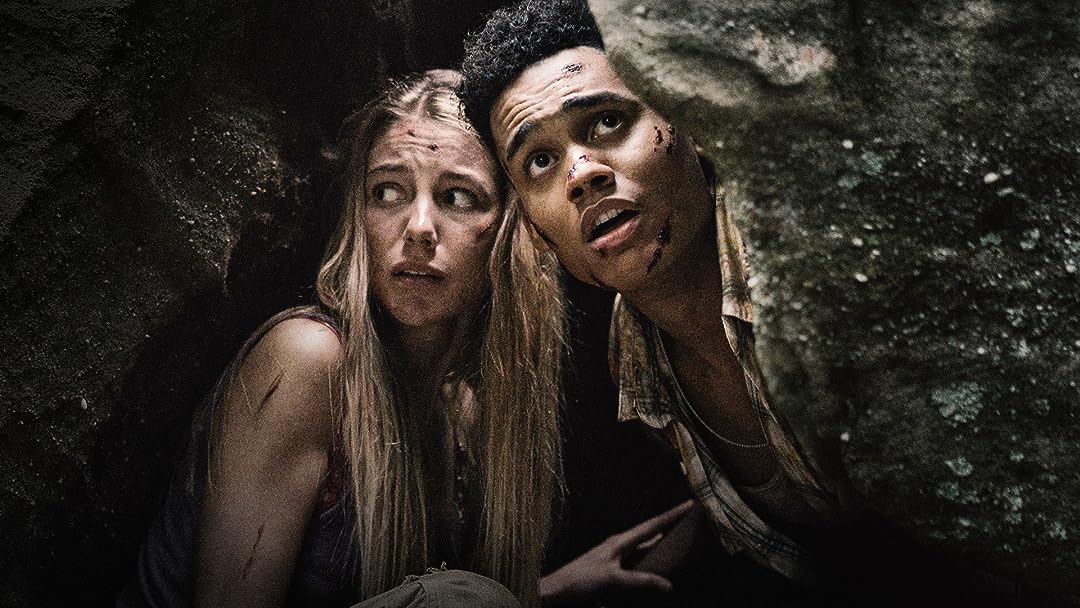 (18,463)5.51 h 49 min2021X-RayR
When a woman and her group of friends set out to hike the Appalachian Trail, they veer off course and into a community of mountain dwellers who will protect their privacy at any cost.

Joseph A. ArdineReviewed in the United States on February 25, 2021
1.0 out of 5 stars
Horrid!
Verified purchase
So Wrong Turn had six films of varying degrees of enjoyment. Even the worst of the bunch had stuff in them to enjoy. Wrong Turn 2021...well it was a complete mess of a film. The film tries to be cute by making an in-joke about it being a "good thing it isn't yet another inbred cannibal film". Well maybe if it was, people would have enjoyed it.

The premise is ridiculous. A secret, hundreds of year's old society hiding in the Virginia woods lives in perfect harmony. All the races and sexes get along, all sharing equally, all contributing equally, no disease, and hates outsiders. Picture what a hippie thinks is utopia but in reality it's a lame commune of dorks who have made up their own dumb language and dress like Arthurian Druids.

Our "heroes" are the most obnoxious blend of millennial hipster super woke progressive dolts who check all the diversity box requirements. Every word out of their mouths is really smug, obnoxious, or just plain irritating. There is no character development, no backstory aside from their hillbilly smack down where they prove how tough they are by stating their professions of nonprofit organizer and bistro owner! It's a laughable scene and totally ridiculous.

But aside from that...and a grating, self-righteous monologue from Darius in where he's preaching about the woes of Wallstreet and how awesome his nonprofit comrades are, we get nothing. Even some of the lamest slashers give us a little more. But whatever.

Long story short, they intrude on the hippie's land, people are killed, and two are forced to stay and become part of the commune. Of course papa is looking for his daughter (one of the millennials forced to now stay at the commune and be wife to the hippie lord in charge -even though they are all equal ha!) and he goes searching for her.

By this point - six weeks mind you - the daughter has become a master woodsman, expert in combat with knives and bow, can even work a gun etc. etc. From here on out we'll call her ultra daughter!

Papa finds ultra daughter but he's imprisoned, blah, blah, blah, it gets really dull here and it becomes the typical "let's wander around for the next 30 minutes doing nothing". They escape because ultra daughter is a combat master ninja and can beat anyone up! I wish I had that six week course! But the evil hippie lord ain't having it so he tracks they back home.

Now we do have a cool scene of ultra daughter and hippie lord fighting in the house, and the actions would have been more believable than the actual ending, but of course it's all a daydream. So the cool little fight is ruined in favor of the really dumb ending.

Hippie lord demands ultra daughter come back with him to birth their child and she agrees. So they all hop in the Jonestown bus, which is filled with other evil hippies and take off for Virginia. The bus takes off but...it immediately crashes. Ultra daughter now graduates to ultra Mary Sue, because she kills everyone in the bus off screen (because it would be way to unbelievable to show it so just take their word for it!)

Then ultra Mary Sue leaves the bus to hunt down the last guy who is stumbling away. She takes him down with a terrible cgi knife throw and walks off into the sunset with a moody rendition of "This Land is Your Land" playing in the background.

So now you can roll your eyes and hate yourself because you just wasted 9$ thinking you were going to get another fun, inbred cannibal mutilating teens afternoon romp...but instead you got the "Hippies of Utopia Mountain vs. Super Sue the Master Ninja".

Judge MentalReviewed in the United States on February 23, 2021
2.0 out of 5 stars
WOKE Garbage
Verified purchase
This movie gets two stars because I love Bill Sage's performances in every movie he does. Always have. Brilliant actor. I also love Matthew Modine. Otherwise it is not what you are expecting at all in a movie called Wrong Turn.

Everything was over-the-top to the point if absurdity. The hillbillies were HILLBILLY to the extreme. And the "foundation" was not even the slightest original enough to portray as the inbred cannibals from the previous movies. The SJW's put all their bigotry toward the non-WOKE on full display. No tolerance at all for people different from them.

Then the icing on the cake was the constant civil war references to the "south" and the foundation's foreseeing the collapse of America in 1859. Just like SJW's criticism of patriots in this country who foreshadow the collapse of the USA in today's time. Stereotyping through and through. Something the leftist scum decry at the same time doing it themselves.

The main girl will probably get an abortion to put the cherry on top of this "WOKE-cream sundae".

I Actually recommend watching it to see all the details I am referring to. Then we need to boycott these stupid Movie studios for churning out this WOKE garbage.
107 people found this helpful

EmmaReviewed in the United States on February 24, 2021
1.0 out of 5 stars
Yikes
Verified purchase
A lot of ideas thrown around and honestly just ridiculous. Hard to find any of these college-aged characters likeable and less so these "mountain dwellers". Strange anti-patriotic subtext and everyone watching with me were fed up for the last 30 minutes. Nothing worthwhile was taken from this movie and outside of the first half not even an enjoyable mindless gore factor. Try thinking of a knock-off/mashup of GREEN INFERNO, MIDSOMMAR, AND THE VILLAGE. though I will say there is a pretty good scene through the "darkness cave" but probably wait till this movie is free.
59 people found this helpful

Kindle CustomerReviewed in the United States on March 3, 2021
1.0 out of 5 stars
Please, save yourself the time and money, don't watch this hunk of garbage.
Verified purchase
No one is claiming the original series was a masterpiece, but you knew what to expect, and they could be fun. This new imagining is boring, preachy, uncreative, and doesn't know what it wants to be. The characters are all self righteous a-holes, the story is all over the place, the gore is lacking, and the cannibalism has been cut from the story altogether, instead option for an entire Amish society the somehow claims complete racial equality despite being founded by Confederate's right before the Civil War. I genuinely pity all the good actors who were wasted to allow the female protagonist- easily tied for worst performer of the film, with the actor playing her father- an unearned Final Girl status.
44 people found this helpful

MichaelReviewed in the United States on February 23, 2021
4.0 out of 5 stars
A decent film with the misfortune of being called Wrong Turn
Verified purchase
This is not the movie you think it is. It shares only a name with the multi sequel series, and people are going to rate it 1 star just for that on a kneejerk.

Don't let that get to you.

Forget the name. The movie starts off extremely typical but it grows into something more interesting. I'm not going to write a novel about the movie, but give it a shot and you'll probably get a good kick out of it.

I was pleasantly surprised to say the least. Again, it's not the Wrong Turn you're thinking of. And that's ok.
30 people found this helpful

MicahReviewed in the United States on March 23, 2021
1.0 out of 5 stars
Horrifying...
Verified purchase
Horrifyingly bad. Watching this is similar to being on fire for 2 hrs straight. SJW trash at it’s best. Scam. Will grow a clown nose after watching. Just an incredibly annoying disaster of a film. Don’t be a disgrace to your family, friends, and fellow humans by watching this and acting like you enjoy woke garbage. Would maybe be decent if it had absolutely anything similar to the other Wrong Turn movies in it. It doesn’t. Make sure to have powerful tranquilizers nearby if you attempt to endure this torture.
25 people found this helpful
See all reviews
Back to top
Get to Know Us
Make Money with Us
Amazon Payment Products
Let Us Help You
EnglishChoose a language for shopping. United StatesChoose a country/region for shopping.
© 1996-2021, Amazon.com, Inc. or its affiliates