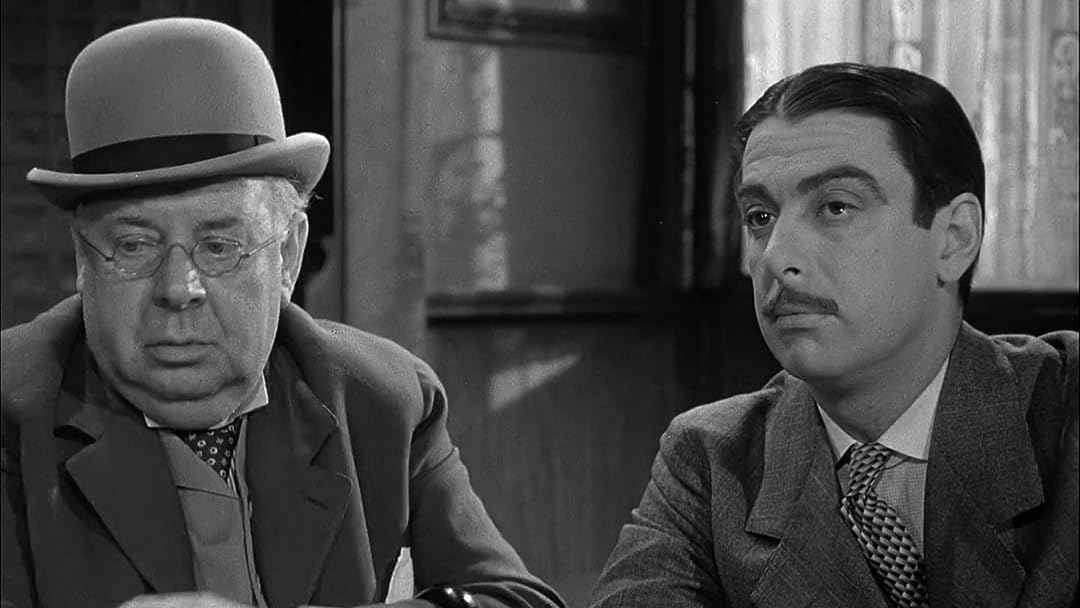 (2,715)
7.62 h 5 min1942X-Ray13+
James Cagney danced and sang his way to a well-deserved Oscar for his outstanding portrayal of vaudeville composer and performer George M. Cohan in this Oscar-nominated biography.

Included with BroadwayHD on Amazon for $8.99/month after trial

Watch with BroadwayHD
Start your 7-day free trial
Add to
Watchlist
By ordering or viewing, you agree to our Terms. Sold by Amazon.com Services LLC.
Write review

trancelucenceReviewed in the United States on January 9, 2018
5.0 out of 5 stars
Rosemary DeCamp was great too!
Verified purchase
LOVE this movie, James Cagney, his dancing, and the marvelous Walter Huston. But my main reason for leaving a review is to mention Rosemary DeCamp, the wonderful actress who played George M. Cohan's mother. I started out as a film major way back when, and it irks me that for some reason she gets like 6th billing- why, Irene Manning, who played Fay Templeton and was lesser known than DeCamp, had just a few minutes of screen time, and got higher billing. Mystifying. DeKamp was a Hollywood mainstay, much loved (a favorite of mine), and next to James Cagney probably the most recognizable person in the film.

DeCamp (1910- 2001) had a long show-biz career, starting in 1937 (after first working as a newspaper reporter) and continuing until the mid 80s. In addition to radio, films, and commercials (e.g., 20 Mule Team Borax), she was in dozens of TV shows, from The Life of Riley, Rawhide and Death Valley Days to Petticoat Junction, That Girl (Ann Marie's mother), The Partridge Family (Shirley Jones's mother), and Buck Rogers in the 25th Century (Buck's mother). After Spring Byington (whose acting career began in 1908 (!) and lasted until I Dream of Jeannie and The Flying Nun in the late 60's), DeCamp is probably identified as "mom" more than anyone else in the 20th century. She was also famed for Howard Hughes crashing an experimental plane into her house in Beverly Hills. She and her husband were in bed and the wing of the plane just missed them. Anyway, no-one seems to mention her and she lent her dignity, beauty and quiet grace to the film as Cohan's mother (though curiously she was 11 years younger than Cagney).

And while I'm waxing nostalgic on trivia surrounding the film, regarding the marvelous Walter Huston (father of director John Huston, grandfather of actress Angelica), who plays the elder Cohan- in 1909, at age 26, he fell in love with one Mina Rose, age 44. He saw her on stage, and left his wife & job as the manager of a power plant to tour in Vaudeville with her. Divorced in 1924, when he was 41 & she 59, they were together for 15 years. For me his best film was [[ASIN:B01DBCOA4K Dodsworth]], just wonderful.

BTW, in Yankee Doodle Dandy Josie Cohan, George's sister, is played by Cagney's real life sister Jeanne. Cagney is over the top in this film. He began as a dancer in 1919, dancing was his real love and it shows. No-one else displays such exuberance- a joy to watch (and I'm not much of fan of dance, but Cagney's in a class all his own). If you haven't seen this you MUST- perfect for the 4th of July, patriotic American schmaltz of the highest order.
Pics: Rosemary DeCamp circa 1950s, and from Yankee Doodle Dandy, from left to right- Jeanne Cagney, James Cagney, Rosemary DeCamp, Walter Huston

S. J. VolkReviewed in the United States on February 2, 2018
5.0 out of 5 stars
CAGNEY IS COHAN,,, THE LEGEND AND THE MAN!!!
Verified purchase
James Cagney was a natural. Born with a quick brilliant mind and a compact agile body, this legendary actor-dancer-singer couldn't help but become an instant movie sensation in the 1930's. And his old movies today are just as fresh and vibrant as they were nearly a century ago. Cagney was destined to play George M. Cohan in "Yankee Doodle Dandy". He didn't just ACT the part. He BECAME the character. And Cagney's inspired performance makes it clearly evident that he and Cohan were kindred spirits. This rousing musical is an outstanding production. It's one of Hollywood's finest. And it's one of James Cagney's best performances. Don't miss it!

(If this review was helpful in any way, please click on the "Helpful" key below, or write a comment. Thanks).
20 people found this helpful

Ronald E KemperReviewed in the United States on April 19, 2020
5.0 out of 5 stars
Great, Uplifting Movie!
Verified purchase
One might criticize Hollywood/Warner Brothers for rewriting history with this movie, as the character featured in this biography - George M. Cohan - was portrayed as having one wife (Cohan had 2), as receiving the Medal of Honor from Roosevelt in 1942 (he received it in 1940), and a few other historical inconsistencies. However, the movie certainly captures the spirit of Cohan's great musical work and it was made to uplift during a particularly dark time in American history where we were facing many defeats in the Pacific and in Europe during World War 2. James Cagney originally refused to do the part in the movie because of some animosity towards Cohan due to Cohan's anti actor's labor strike position, years earlier; but then put himself into the part like no actor ever could've with panache and skill, as an accomplished singer and dancer.

Buy the film, don't just rent it, for you will want to see it over and over again!
6 people found this helpful

D. AdamsReviewed in the United States on November 11, 2019
5.0 out of 5 stars
Wonderful musical bio
Verified purchase
Such a wonderful film!!! I saw it when younger and finally purchased this set. The film is beautiful and James Cagney is mesmerizing at George M. Cohan. I watched this three times in 4 days and I'm just amazed each time at his dancing and footwork. It's a shame he mostly was typecast as a villain - he could have been in the same league as Fred Astaire. The second disc is fascinating. One is a biography of George M. and the other of James Cagney. Both very informative an enjoyable. If you are a patriot or a musical lover or both, this is a must-have.
9 people found this helpful

jadedpcguyReviewed in the United States on September 9, 2021
4.0 out of 5 stars
The blu-ray is missing extras that were in the DVD version
Verified purchase
There are problems with this version. There is no chapter menu (the pop-up is not implemented), several of the extras that were in the DVD version are missing (including a very nice documentary about the life of James Cagney). And I really hate the sharpening the movie went through when brought to blu-ray. The film grain is way too visible and looks like a swarm of bugs flying around behind the actors most of the time. Very distracting and it does not reflect what the movie looked like on a movie screen. (Yes, I do see 1930s movies in modern theaters on occasion). Unfortunately, several brand new DVD copies I've tried seem to have failed at the same point due to age so this may be the only choice.
3 people found this helpful

P. WoodlandReviewed in the United States on January 8, 2018
5.0 out of 5 stars
Yankee Doodle Dandy
Verified purchase
My favorite movie of all time. Jimmy Cagney is exceptional in his role of George M. Cohan. He sings. He dances - who knew the man could dance like that? I certainly didn't when I first saw this movie. I had only thought he was a straight actor. But he could tap like the best of them. This tale of the rise of one of the greatest composers of his time is entertaining and eminently watchable. I've been watching it since I first saw it with my father when I was a teenager and I'm still watching it now when I am in my late 50ies. I will continue to watch it.
7 people found this helpful

R. L WrightReviewed in the United States on July 14, 2017
5.0 out of 5 stars
Wartime entertainment at its best !!
Verified purchase
One of the best wartime musicals ever. You see James Cagney as you've never seen him before. His dancing was incredible, I swear his legs were made out of rubber. For those who see him as the perennial gangster, this film shatters that image. I could tell he must have had a ball making this film, it required all of his talents. It was his personal favorite of all his films and the Oscar he won was more than justly deserved. A great film to watch anytime but a special treat on the 4th of July.
9 people found this helpful

James Cagney started out as a song-and-dance man on Broadway, and was in a few musical movies when he first came to Hollywood. But the studio roped him into playing gangsters and other tough guys, and it was not until this movie that his long-dormant dancing skills finally came back into light.

Warner Home Video has gone all out on this 2-disc Special Edition. The first disc begins with a WARNER NIGHT AT THE MOVIES 1942 intro with ET's Leonard Maltin, followed by the trailer for [[ASIN:B002VWNIAY Casablanca]], a WWII-era newsreel, a patriotic short narrated by WB contract player Ronald Reagan, a Bugs Bunny MERRIE MELODIES cartoon, the film itself, with a commentary track by a Warner Bros. historian and English, French, and Spanish subtitles, and trailers for seven Cagney films, including YANKEE DOODLE DANDY, [[ASIN:B000JWKXW4 Footlight Parade]], [[ASIN:B0006HBV28 Angels With Dirty Faces]], [[ASIN:B0006HBV3C White Heat]], [[ASIN:B0006HBV32 The Roaring Twenties]], [[ASIN:B0006HBV2S The Public Enemy]], and [[ASIN:B000QGE8JC A Midsummer Night's Dream]].

Disc 2 has more special features, including a making-of documentary called LET FREEDOM SING; a Cagney mini-bio, TOP OF THE WORLD, hosted by Michael J. Fox; John Travolta's reminiscences of Cagney; two LOONEY TUNES cartoons that parody the film's title, one with Bugs Bunny, the other with Daffy Duck; a 1943 Cagney short entitled YOU, JOHN JONES; a visual section containing dressed-set photos, scene stills, Cohan sheet music, and promotional materials; and an audio-only section featuring a radio adaptation of the film, plus rehearsals and outtakes.

This great film is a must-have, and could not be made today.
3 people found this helpful
See all reviews
Back to top
Get to Know Us
Make Money with Us
Amazon Payment Products
Let Us Help You
EnglishChoose a language for shopping. United StatesChoose a country/region for shopping.
© 1996-2022, Amazon.com, Inc. or its affiliates