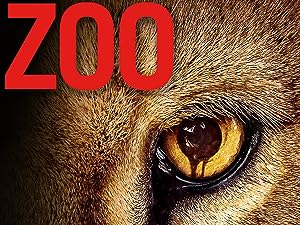 (1,051)
6.72015TV-14
Zoo, based on the number 1 bestselling novel by James Patterson, is a global thriller about a wave of violent animal attacks against humans sweeping the planet.

regpinkyReviewed in the United States on September 9, 2020
5.0 out of 5 stars
Great series beginning season
Verified purchase
Season 1 of Zoo, was surprisingly good with excellent acting an interesting scifi plot and great special fx.

Season 2 of Zoo, was also quite good, carrying the plot successfully from the first season and adding continual suspenseful twists and turns.

Season 3 of Zoo, however suffered from poor writing and plot changes. The excellent acting and special fx were still there, but at times the writing had so many holes, I thought I was watching some religious revival the plot was so holy. The writing got so bad, that by the middle of the season I was anxious for the season to just end. And, when it did it ended on a cliffhanger, and that makes me sorry I even spent so much time watching all the seasons.

The least they could have done is produce an ending, at least for the fans. Of course studio's don't care about fans, only money. But it's extremely angering when studio's drop shows without at least creating some sort of ending. I mean, the writing was so awful in the 3rd season, and consequently the ratings so low, I understand why the show was not carried for a 4th season, but at least end the damn thing.

But then we the viewers, can pay CBS back, by boycotting any shows created by CBS in the future!

cahammerReviewed in the United States on June 4, 2020
4.0 out of 5 stars
No HD for Seasons 2 or 3
Verified purchase
I enjoyed this first season in HD very much. I gave it only 4 stars because seasons 2 and 3 are only available in DVD quality and I refuse to buy anything worse than HD bluray (I prefer to buy UHD 4K). It angers me when a series starts out in HD and then drops down to DVD for subsequent seasons. As soon as HD or UHD becomes available, I will buy seasons 2 and 3. Until then, I am stopped at the end of season 1.
One person found this helpful

4everyoung99Reviewed in the United States on September 25, 2015
5.0 out of 5 stars
Great Suspenseful New Series!
Verified purchase
I loved it! There was just enough science fiction and real science to make the plot believable, and the ensemble of excellent actors worked great with each other. I could hardly wait from week to week to find out what was going to happen next! "Zoo" is quite different from anything else that has been on, or is currently on, and I'm sure that this is part of its success, as well as excellent direction, excellent acting, and the writing. I can't wait for Season 2!
One person found this helpful

Mike Billington author of Murder in the Rainy SeasonReviewed in the United States on February 13, 2016
4.0 out of 5 stars
"Zoo" is exciting and well worth watching
Verified purchase
What if...
Always an intriguing way to start a story and, in "Zoo," it's even more so because it involves a revolt against humanity by the animal kingdom.
Based on a James Patterson and Michael Ledwidge novel, "Zoo" features a small band of experts trying to understand what seem to be accelerated mutations in animals - including birds and reptiles. This mutation is giving the animals some really interesting powers: Lions that can communicate over long distances, for example, and bears that are developing exoskeletons akin to body armor.
The experts are also pitted against a giant multinational corporation that may have caused the problem by contaminating pesticides and food products with unsafe chemicals. There is a nice twist in the narrative regarding the corporation.
The experts, meanwhile, are a quirky bunch: A cynical veterinary pathologist (played brilliantly by Billy Burke), a safari guide with a dark past, a journalist with a grudge against the multinational, an animal behaviorist (who is the son of a disgraced scientist), and a French intelligence services agent who runs the team. Throughout this first season they have been searching for a way to reverse - or at least slow down - the mutations while encountering problems along the way from the multinational, the FBI, skeptical scientists, African bandits, and the animals themselves.
The special effects are top grade and the scripts, while a little preachy in some instances, hold together well. The narrative wanders now and then, but not so much that it loses viewers, and the direction is sure-handed. Character development is handled well: The back stories of the experts are handled with dialogue that is nicely worked into the team's adventures, for example. The first season ends with a cliff hanger - something that has become an all-too-common staple of network television in my opinion. No plot spoilers here but I will say that the first season's ending episode was pretty predictable. That aside, there is plenty of action in each episode and some nice turns by the cast, which made watching the series enjoyable.
All things considered, I give it 4.5 stars.
7 people found this helpful

StephReviewed in the United States on April 18, 2019
5.0 out of 5 stars
Love it!
Verified purchase
I love this show! I loves the behind the scenes look at everything. You can't help but care about the people and the animals. Good for the whole family. Educational and entertaining.
3 people found this helpful

SharonReviewed in the United States on May 17, 2016
5.0 out of 5 stars
Zoo...animals out to get humans...
Verified purchase
Oh my! What can I say about this series? I LOVE it. I love animals. Cats of all types are my favorite. I bought the book to see what the differences were and the series is MUCH better. The characters are much more likable. Personally, I think the special effects are good, excellent for a series. The dog who detects seizures being given an antiinflammatory drug made by Raedon chemicals? Be still my heart.... Birds attacking? We are DOOMED!
4 people found this helpful

Nemo ProtagonistReviewed in the United States on November 25, 2015
4.0 out of 5 stars
Worth Watching
Verified purchase
Although the premise is preposterous, the writers and director(s) make the most of what they have. The scripts are well written and the acting is good enough.
This is an archetypal story about a group of people brought together by circumstances who set out on a quest perilous. They seek to find out what is making the animals act so strangely and violently 'and to stop it'.
They have a shared agenda but, each also has his/her own private agenda.
It has proved to be a very watchable show.
3 people found this helpful
See all reviews
Back to top
Get to Know Us
Make Money with Us
Amazon Payment Products
Let Us Help You
EnglishChoose a language for shopping. United StatesChoose a country/region for shopping.
© 1996-2021, Amazon.com, Inc. or its affiliates