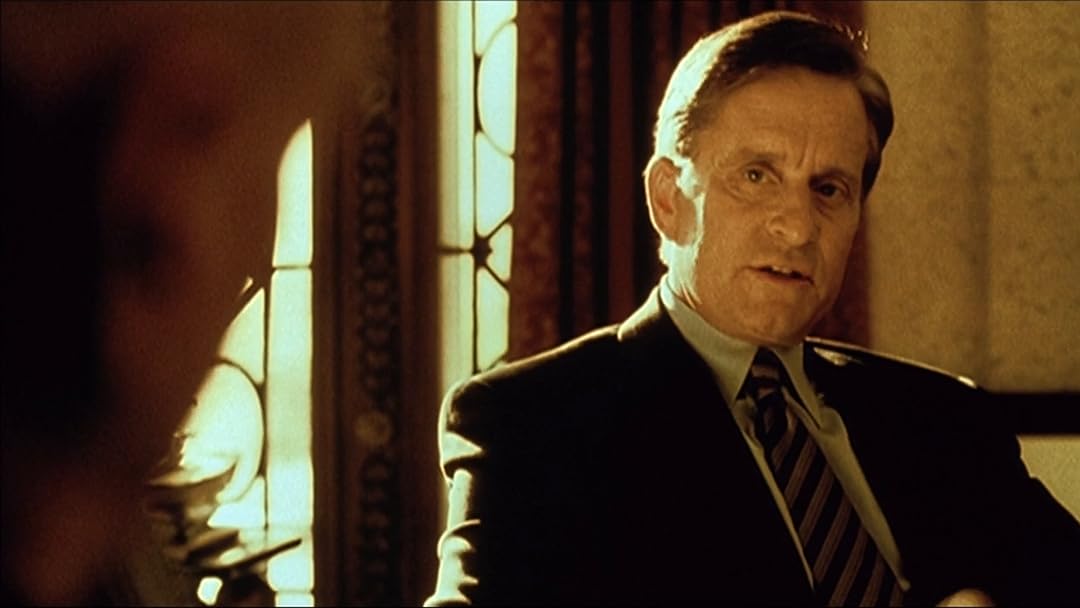 (2,066)
7.62 h 27 min2001X-RayR
While a judge's anti-drug campaign leads him to his own daughter, a DEA agent targets a trafficker's wife, and a policeman fights corruption.

joel wingReviewed in the United States on August 22, 2020
4.0 out of 5 stars
4 stories on how futile war on drugs is
Verified purchase
Traffic was a Steven Soderbergh film about the war on drugs. It used an ensemble cast including Benicio del Toro, Jacob Vargas, Michael Douglas, Amy Irving, Erika Christensen, Don Cheadle, Luis Guzman, Catherine Zeta-Jones, and others. They play in four main stories to try to relay the different parts of the war from the corrupt officials in Mexico to Washington’s anti-drug campaign to the DEA to drug use by kids.

Things start with del Toro and Vargas as Mexican State Police officers Rodriguez and Sanchez respectively. They get involved with a crooked Mexican general who is working for one drug cartel against another. Then there’s Douglas, Irvin and Christensen as the Wakefield family. Douglas plays the newly appointed drug czar who then finds out his daughter Christensen is into heavy drugs. Next are Cheadle and Guzman as DEA agents Gordon and Castro. They arrest a drug trafficker who spills the beans on his operations in the United States that includes Zeta-Jones’ husband. Starting with Mexico you have drug cartels who are so powerful they control the authorities and the military. Then there’s the irony of the drug czar having to fight drug use within his own family. It brings up the fact that drugs are widely used by Americans, which is the main reason why there’s the drug trade to begin with because the demand is so high in the U.S. Finally, the DEA agents highlight the fruitlessness of fighting the war on drugs on the American side of the border. Overall it portrays that the U.S. drives the drug trade and the war in both Mexica and the United States are failing.
C

Reverend Joaquin R. LarribaReviewed in the United States on September 27, 2021
5.0 out of 5 stars
Worth Watching
Verified purchase
Very good movie. Well written and executed by a host of believable actors. This movie did a great job of sharing multiple perspectives of the lives affected by drugs and the lifestyle that goes with them. Here is a link to a true story of a rescued soul that lived this very life but made it out.
https://www.amazon.com/Remember-Prisoners-Came-Captives-Free-ebook/dp/B072LL3JNR/ref=tmm_kin_swatch_0?_encoding=UTF8&qid=&sr=
2 people found this helpful

BluebellReviewed in the United States on January 31, 2016
5.0 out of 5 stars
I have always loved this film
Verified purchase
I have always loved this film, which so urgently portrays the toll of drug traffic on all parties - small users, serious addicts, growers in poor countries, corrupt law enforcement and so forth. Benicio del Toro embodied all the paradoxes and tragic observances of the human being on the ground right in the middle. Exciting, terrifying, dramatic - the film moves you along fast paced simultaneous narratives.
26 people found this helpful

Kindle clientReviewed in the United States on September 24, 2021
5.0 out of 5 stars
One of my favorite movies.
Verified purchase
I watched this movie before been a father and after been a father, the first time it really got me thinking, the second time it got tears in my eyes knowing how drugs can destroy someone so smart and precious. I think the acting was great and the plot was great. I wish they made a sequel to it.
One person found this helpful

KcornReviewed in the United States on May 31, 2001
5.0 out of 5 stars
It took guts and courage to make this one
Verified purchase
It must have been hard to show the complexities of the world of drugs and drugs trafficking without wimping out and coming around to simplistic generalities and easy solutions. One strength of this film is that it doesn't reveal any one answer to the problem of drugs. What it does do is show the difficulty in enforcing the law and keeping tabs on drug users and sellers. It also shows how even those who consider themselves untouchable (like the U.S Drug Czar, played with admirable restraint by Michael Douglas) are just as vulnerable as those who seem easier prey for the drug pushers. When Douglas's daughter slowly becomes addicted to drugs, for instance, he doesn't find out until it is almost too late. There is so much fine acting in this movie that I'd be hard-pressed to choose one performance as being better than another. Benicio Del Toro gives the performance of his career and, Catherine Zeta-Jones is absolutely superb as a drug lord's wife forced to cope with the threat of financial ruin when her husband is suddenly imprisoned. Her obvious pregnancy makes her seem especially vulnerable, especially desperate for security. There are few truly moral or idealistic characters in this movie but I found myself rooting for many of them, anyway. You're likely to come away from this one with a new view of the drug marketplace and the way it affects us all, whether we think about it or not.
One person found this helpful

Yiannis PReviewed in the United States on December 27, 2016
3.0 out of 5 stars
The War on Ourselves
Verified purchase
Traffic is a Herculean (or is it Sisyphean?) effort by director Sodenberg to record a storyline that captures the essence of the American-Mexican difficulties in dealing effectively with the drug problem. Mike Douglas as the head of the American side on the issue is desperately seeking new approaches "outside the box." But none seem forthcoming. It appears that the movie's scriptwriters and its director himself lack the knowledge or courage to present such new approaches. They mention the necessity for dealing with the demand-side of the issue, but it is not given a full airing. And this is what ultimately makes this film another "war-on-drugs" story which leads to nowhere.
2 people found this helpful

Mark CoffeyReviewed in the United States on June 25, 2001
4.0 out of 5 stars
Two-Thirds of a Great Movie
Verified purchase
Had Traffic stuck to the storylines about Mexico and the Ayala arrest/trial, it would have been a modern classic. Benicio Del Toro is nothing short of spectacular, and was well-deserving of his Oscar, and the interplay between the Feds monitoring Ayala's wife is very funny and believable. Unfortunately, the filmmakers decided to go "big picture", too, so we get the very weak Michael Douglas drug czar subplot. Although it too has its moments (the scene where the boy o.d.s is very believable, particularly the profuse sweeting and feeling hot that proceeded it, and the tear in the eye of Douglas's daughter when she first freebases is a nice touch), the overall tone of this part of the film is a bit preachy. The Douglas subplot also contains the two biggest flaws in the movie - the speed with which Douglas's daughter turns into a drug-crazed prostitute, and the totally unbelievable scene where Douglas resigns right in the middle of his first press conference (although I like the line, "...I don't know how you wage war on your family.") Still, this is a good, not great movie, and the DVD is pretty much along the same lines - some nice special features, but nothing that blows you away. Recommended, but there are other DVDs you should own first.
4 people found this helpful

A. HoganReviewed in the United States on August 9, 2001
4.0 out of 5 stars
Style over substance,saved,redeemed by Del Toro
Verified purchase
Steven Soderbergh loves flash, and people seem to love him. From sex,lies and videotape on, he has commanded grwing respect. After having been mesmerized by the brilliant BBC series TRAFFIK, I was waiting to be dazzled. Sigh. Besides a blistering performance by Benicio Del Toro, this is lame,overwrought and hyerventalating cinema. The story surrounds interconnecting stories around drugs, from the newly appointed National drug czar{an unbelievably torpid Michael Douglas} to a drug king, and his wife{Catherine Zeta-JOnes is a typically wooden performance},the child of the drug czar, two cops, a Mexican cop{Del Toro}andd...the plot laid out over 6 hours on the bbc makes sense, in little over 2 hours it is frenzied and absurd. Douglas searching the "inner" city to find his strung out daughter,and not calling in any law enforcement folks he knows for favors is assinine, and simply not how these guys function. The supposed "harrowing "drug scenes are laughably bad{especially if you have witnessed the real thing}, Dennis quaid makes an appeARANCE as a shady lawyer, and grins his way through this embarrasment.Benjamin Bratt makes a truly ludicrous appearance as the mexican drug connection, with an accent he must have picked up from old Bill Dana routines. The best work is done by three standout actors: Don Cheadle, Luis Guzman and Benicio Del Toro. These three excellent actors hold this movie up. It works very vell when they are on screen, and becomes insipid when they are not. The ending, strangely is quite good and touching in such a light manner that it redeemed the movie for me. So , alltold, extraordinary work by Del Toro, excellent work from the always superb Cheadle and Guzman, weak, by douglas, laughably bad by Zeta-Jones. Watch the BBc series TRAFFIK, and you'll see.
4 people found this helpful
See all reviews
Back to top
Get to Know Us
Make Money with Us
Amazon Payment Products
Let Us Help You
EnglishChoose a language for shopping. United StatesChoose a country/region for shopping.
© 1996-2022, Amazon.com, Inc. or its affiliates