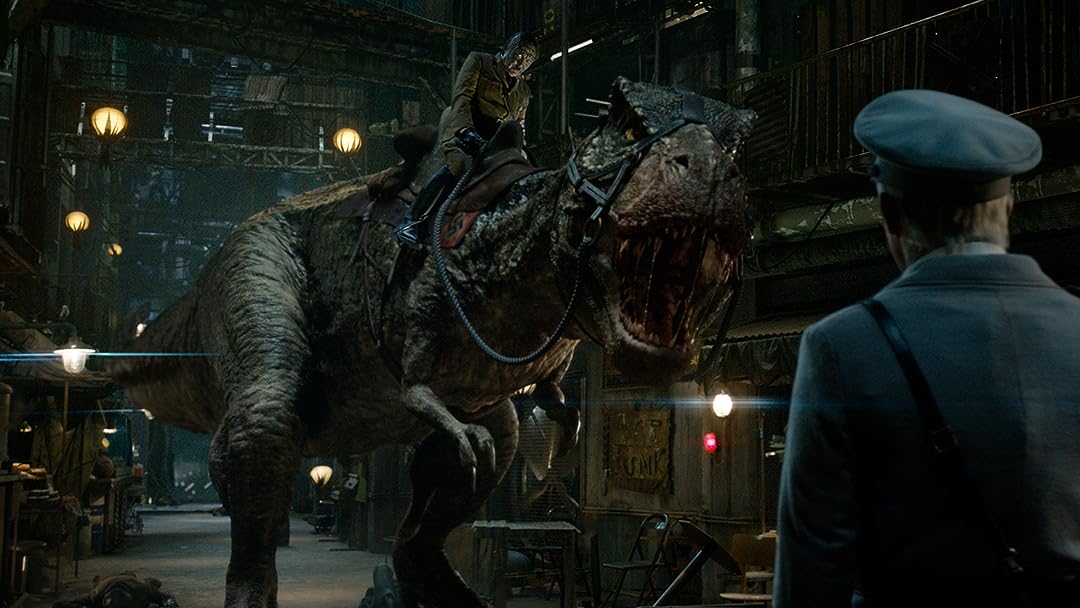 (934)
1 h 32 min2019X-Ray16+
The truth behind the creation of mankind will be revealed when an old enemy leads our heroes on an adventure into the Hollow Earth. To save humanity they must fight an ancient shapeshifting reptilian race and their army of dinosaurs.

DraculaReviewed in the United States on August 1, 2019
1.0 out of 5 stars
AWFUL - not even a B movie.
Verified purchase
Okay, I love B movies - this wasn't a B movie, it was bland, flat, and awful. It's not funny, its not entertaining, its not clever, its just awful. Basically - God is a nazi, religion is evil, and Russia is the devil. Its basically a bunch of jokes from the far left that fall short considering all the "conspiracy theories" like Epstein's pedo-ring island have now come out as true. Rent anything but this, its literally a waste of your money.
56 people found this helpful

Brian ButzReviewed in the United States on November 10, 2019
1.0 out of 5 stars
Blasphemy!
Verified purchase
This is as blasphemous to Iron Sky as the prequel/Disney films are to Star Wars. The original was engaging political satire filled with yearning and melancholic beauty. What made the original so hilarious, is that it was legitimately good despite it's absurdity. It was more or less played straight, building characters and tension. There was action, romance, comedy, political intrigue, and surprises in every scene. The only surprise here was that they made a film of this lousy script. This film throws away the profundity of the first film and replaces it with nothing. The original had something to say about history, and the failings and redemption of the human condition. This doesn't merely fall short of that, it changes the lessons and meaning of the original. I'd read several bad reviews, but figured it couldn't be as bad as they say. I figured it was the absurdity of the script that threw them off, while it's true, here they didn't en try to make it credible. It's much worse than I expected.. not a single laugh, no story engagement, no political commentary, no heartfelt interactions there wasn't even good action. It was like they threw darts at a brochure of conspiracy theories and wrote a story out of it. The scenes before the credits showed promise, it had the feel and the attitude of the original, but that promise was drudgingly broken scene after scene for 50 minutes before knowing what the plot is.
33 people found this helpful

Kindle CustomerReviewed in the United States on September 26, 2019
1.0 out of 5 stars
Iron Sky: The Coming Rip-Off
Verified purchase
There are many words that come to mind to describe this "sequel"... Unfortunately using them would get me barred from any further reviews of ANY product. Here's a few I can use: horrible, cheap, no-good, irredeemably bad, worthless, time waster, maggoty, SAG revocable atrocity offense, and career ending trainwreck. SOME movies are so transcendently bad they actually attain a sort of cult status; like Plan Nine From Outer Space; this alas fails even that. If you enjoyed the campy romp of the original... do yourself a favor and rather than punish that memory... just watch it again. Don't ruin it by watching this triple back somersault of sewer drenched dreck. IF you do... YOU. WERE. WARNED.
32 people found this helpful

Vaguely ConfusedReviewed in the United States on August 8, 2019
5.0 out of 5 stars
Not Quite as Good Does Not mean Bad.
Verified purchase
TLDR; Not quite as good as the first one but, it does retain the overall ridiculous tone and by the end you're left with the same "That was fun" emotions as the first one. Can't freaking wait for the third installment.

A lot of people seem to be hating on this film which is a shame cause it really does not deserve the hate. I bought this movie both because it's actually pretty damn good for a 1.5-hour B-Movie extravaganza. I'll admit it seems a bit rushed at times and they leaned possibly too heavy on the Apple jokes (which is only really a problem if you're like me and hate Apple so viscerally that you can't even enjoy the jokes...) but all that said, it's still got the ridiculous humor and the premise is ridiculous. This is a "Franchise"(?) about NAZI's FROM THE DARK SIDE OF THE MOON. It's not gonna be raining Emmys or getting Movie of the year sure, but that's not the point. It's got the ridiculous tone and ridiculous jokes and the CG (except for like one small ship scene) and effects/sets and all is really pretty great and that's good enough in my book.

Folks need to stop expecting Avengers level scripting and effects for everything, not everything is made by the industry juggernauts that have more money than sense for goodness sake.

J. MilesReviewed in the United States on August 29, 2019
1.0 out of 5 stars
Now I see why this movie was not released in the United States
Verified purchase
I was a huge fan of the original Iron Sky movie. Julia Dietze MADE Iron Sky worth watching. Julia Dietze is also in this movie, but it is like the director wanted to make her look like an old witch and then give her a minor role in the movie. The whole movie was poorly written, poorly directed, and poorly executed. After all the delays in production, release, and distribution the movie was basically not worth watching---much less purchasing.
25 people found this helpful

Steven WoodcockReviewed in the United States on September 22, 2019
3.0 out of 5 stars
Neat Idea, but Disappointing Sequel
Verified purchase
I absolutely loved the idea of "Nazis on the Moon" presented by the first Iron Sky, and so I was excited with the possibilities of this second. After all, the stories about the Hollow Earth are a ripe area for exploring this universe!

The movie was....okay. It advances the story with a couple of well known characters making a reappearance. The trailer is sadly misleading and it feels to me as if the movie was recut, which makes me wonder if the producers changed direction partway through. Without spoilers, the promise of the story that you see from the trailer certainly was NOT realized in the movie proper. It's not *bad*, just *different*…..

This was an okay sequel to an excellent movie. There's a set up for a sequel which I won't reveal here but it looks quite promising. We'll see if the producers are able to fulfill that promise....

Recommended if you're an Iron Sky fan and/or like the idea of Nazis on the Moon.

RocketeerReviewed in the United States on February 10, 2020
3.0 out of 5 stars
Bit of a disappointment
Verified purchase
If the original Iron Sky was a dynamite movie, this is more like a firecracker. Although you'd think Nazis at the center of the earth would be pretty darned exciting, for some reason it doesn't come off. And we only see Hitler riding a dinosaur for a few seconds! What a cheat! The movie wastes a lot of energy satirizing Steve Jobs, which is ultimately just dead air. A comic-relief Russian character is fun, for a while, but his eventual romantic attachment to our heroine is easy to foresee and tediously long in happening. I had hoped to see more of President Sarah Palin, but she's not around much, which is too bad; her vulgar energy really perked up the first movie.

All in all, a sadly wasted opportunity.
5 people found this helpful

Amazon CustomerReviewed in the United States on July 20, 2019
3.0 out of 5 stars
Not bad. felt like a true sequell, despite some retconing to up the anty, but mistakes were made.
Verified purchase
If you like the first one, you will probably like this one, It fumbles around in its big shoes, but it gets you to the end fairly satisfied, and is a good continuation of the story. I like the new characters, but No James Washington, which is dissapionting, the narration was unnecessary and there are other things that could be nit picked, but they are minor. Was better then expected, after watching the trailer.
8 people found this helpful
See all reviews
Back to top
Get to Know Us
Make Money with Us
Amazon Payment Products
Let Us Help You
EnglishChoose a language for shopping. United StatesChoose a country/region for shopping.
© 1996-2022, Amazon.com, Inc. or its affiliates