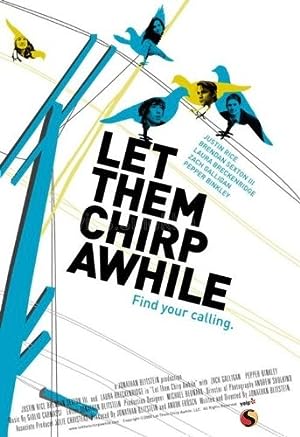 Let them Chirp a While

Studio
Let them Chirp a While

born into thisReviewed in the United States on May 17, 2010
3.0 out of 5 stars
Living Here in Allen-town
An obvious homage to Woody Allen adapted to contemporary twenty-somethings. The title comes from a passage in Emerson's 'Self-Reliance' and clues us to the possibility that some sort of breakthrough or insight may be incubating in our protagonist-- A young creatively frustrated NYC writer who is navigating the tensions of friendship, love interest, and artistic rivalry. And oh yeah, the perils of dog-sitting.

His best friend--a somewhat mentally somnabulant musician with a day-job--has creative and relationship problems of his own and the film essentially entwines itself in their collective angst-ridden relationship adventures.

Our lead Justin Rice (who I loved in 'Mutual Appreciation' and who on paper at least would seem a good choice for the role) comes off--for myself anyway--as less than inspired: a little misanthropic-neurotic Allen here, a little mumbling-bumbling Ben Stiller there, not enough Rice in his completely natural habitat: Wild, as in free.

Virtually every aspect of the film seems Allen-inspired from the quasi-ensemble nature of the storytelling to the music to the ironic plot moves (including a kind of Bergman sub-plot) and while it is enjoyable overall I think the spectre of Allen looms a little too large for the film to rise above the moderately charming & amusing level or to have something vital or original to say; and if the performances are generally sound none are particularly memorable.

The best reason to watch this is for the fine walking and talking shots of the city and as a kind of ritual participation in Allen appreciation.

See all reviews
Back to top
Get to Know Us
Make Money with Us
Amazon Payment Products
Let Us Help You
EnglishChoose a language for shopping. United StatesChoose a country/region for shopping.
© 1996-2021, Amazon.com, Inc. or its affiliates